Episode 48 of KiraKira ☆ PreCure a la Mode focuses on the final battle. There isn’t really anything else I can add to this introduction, so might as well just dive straight in. 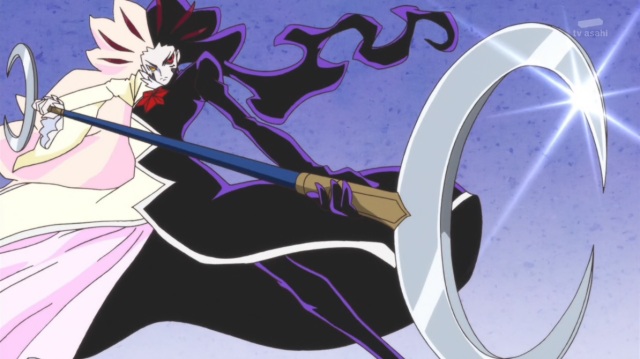 Previously, Elisio was able to create a world where there was no love. Of course, since the PreCure are all about love, they naturally oppose this. Elisio doesn’t have room for people with love in his perfect world, so he intends to eliminate PreCure. 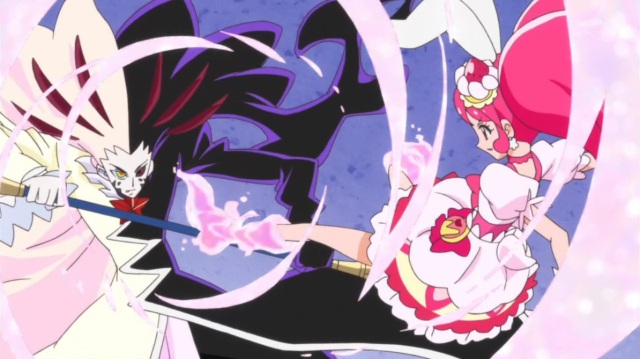 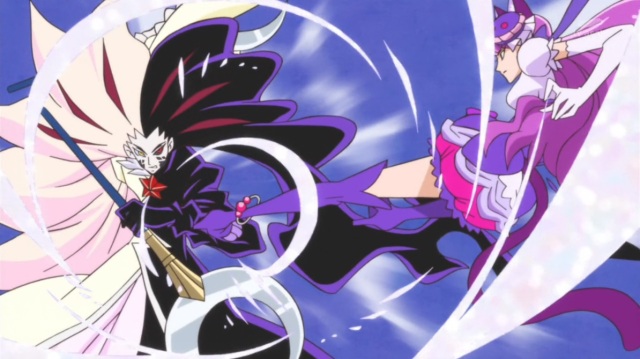 As they fight, Elisio says that he has no feelings. Everything he has done up to this point has merely been observation and imitation.
The fight continues, with Elisio attempting to capture PreCure in his cards. However, the blast them away and launch their own attack.

As PreCure’s attack clashes with Elisio’s, kira-kiraru rains down upon the world beneath them. As it falls, the people start recalling their loves and returning to normal.
Elisio is surprised to see everyone going back to normal. Ichika tells him it is the power of love, before PreCures’ attack sends him into the upper atmosphere.
Since Elisio wasn’t able to win his battle against PreCure, he decides for a different option instead.

Elisio turns himself into a black hole. He pulls PreCure and the entire Earth inside of himself. He is actually successful in doing that, and he intends to drift through space until his body crumbles to dust afterwards.
PreCure finds themselves trapped within Elisio, where they have to endure watching their loved ones seemingly disappear. Just as hope seems lost, a familiar voice calls out to them. 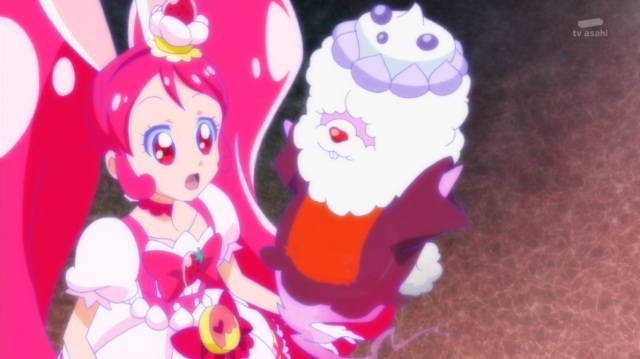 Chourou encourages Cure Whip and the others

Since Chourou has no physical body, he is able to move around freely within Elisio. He happily presents his own kira-kiraru to PreCure, and tells them that kira-kiraru remains even in the faintest life. Chourou isn’t the only one who hasn’t disappeared yet.

Bibury refuses to be controlled by Elisio

Everyone gathers to present their kira-kiraru to PreCure. Chourou tells them to make sweets with it, and trust the power of those sweets. That’s exactly what PreCure do, but it proves to be fruitless.
Elisio tells them that it is pointless, as people’s hearts are powerless within his body. We see a few flashbacks of how Elisio was created as well as Noir recruiting Bibury and Pikario. He claims his body is an empty shell devoid of kira-kiraru. 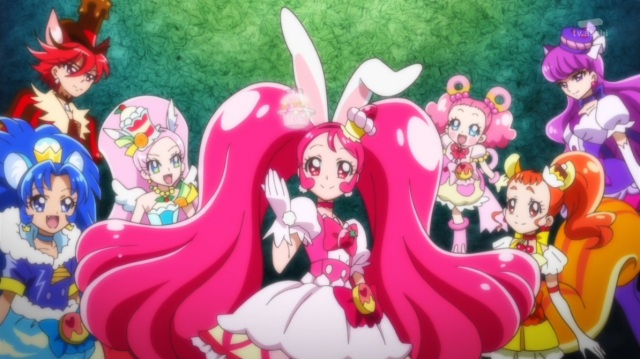 Elisio does actually have a heart; it is made of Lumiere’s kira-kiraru

Elisio is not actually an empty shell – he was created when Noir darkened the kira-kiraru from a cupcake that Lumiere made. As such, he is not truly an empty vessel.
PreCure take that kira-kiraru and mix it together with they kira-kiraru they received from everyone else.
Using that kira-kiraru, they are able to bring about a miracle.

PreCure are able to restore the world. As they fall back to Earth, Elisio tells them he looks forward to the future that they’ve created. He also lets Lumiere and Noir go free.

A birthday cake for Ichika

Upon their return to Earth’s surface, Ichika sees that she has a big old birthday cake waiting for her. She even manages to blow out the candles, despite being tiny compared to it.
Bibury, Chourou and Pikario are waiting outside KiraPati to greet them upon their return – it seems that they and PreCure are the only ones who remember what just happened.
Inside KiraPati, Ichika’s birthday party resumes as if nothing had ever happened.

That wraps up episode 48. There is one more episode to go after this. I’ll most likely write a review for the season after I’ve watched it., though if anything noteworthy crops up then I will cover it
As for this episode; well, I enjoyed that final battle. Noir’s final form was something I liked a lot, and I enjoyed how we actually got some punches and kicks thrown into the combat after not seeing them for an entire season.
Splash Star still holds the title of my favourite final battle, however. But it is not Splash Star I’m talking about here, so let’s move on.

Elisio pulled off a rather interesting stunt in this episode – I certainly didn’t expect him to absorb the entire planet. There are occasions when a PreCure villain is actually able to successfully achieve their plans – Elisio may have been desperate at that point, but he did get to do what he wanted to do.
Of course, this is PreCure, so it was never going to stick. Everyone coming together to share their kira-kiraru… yeah, that’s a PreCure way of resolving things all right. Got to give some bonus points to Chourou for his contribution as well.

Overall a pretty good episode, and I’m happy with the way that the conflict ended. Judging by the preview, it looks like the final episode of KiraKira ☆ PreCure a la Mode will feature a character that we will get to know more in a couple of weeks’ time.