KiraKira ☆ PreCure a la Mode Episode 45: Heart is Not Enough

For episode 45 of KiraKira ☆ PreCure a la Mode, the spotlight shines upon Yukari once more. It also happens to be the Christmas episode. 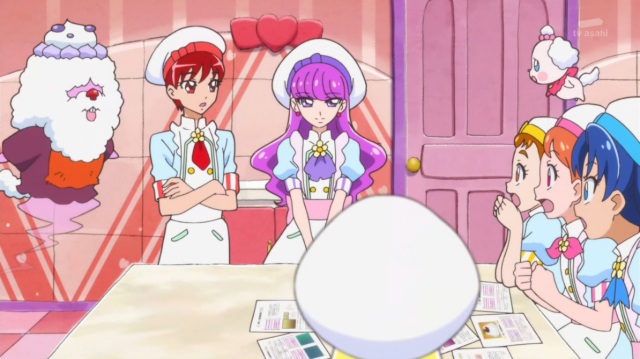 The episode begins with the girls excited for Christmas, discussing what they should do for it. Yukari surprises everyone by suggesting that they have a Christmas party.
Seeing Yukari be proactive about that kind of thing gets Aoi wondering if they will even be able to hold a party next year – everyone will have their own things that they will be doing. 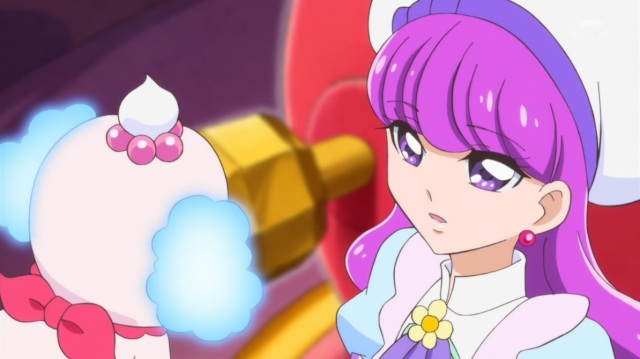 Pekorin starts feeling a little blue after hearing the conversation between Aoi, Himari and Akira, so she goes to Yukari and asks if she will stay. Yukari assures her that they will always be together. 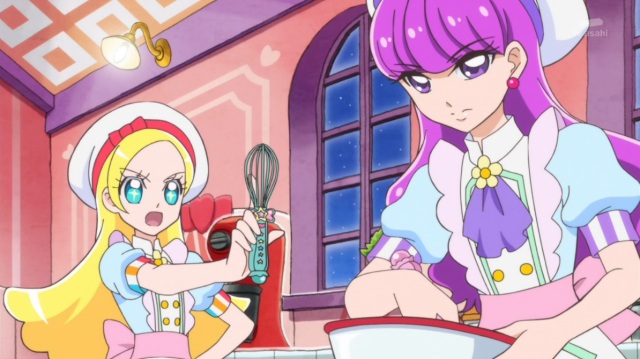 Later on, Yukari asks for a favour from Ciel. Yukari wants to learn how to make macarons. She has made macarons before with her heart poured into them, but this time heart is not enough. Ciel agrees, and puts Yukari through her paces.
The next day, Ichika and the others arrive at KiraPati to discover that it has been transformed. 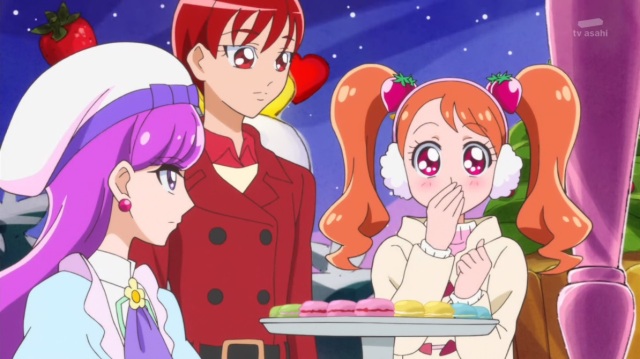 Yukari has prepared macarons, and Ichika tries one. She ends up speechless, almost crying, due to how good they have turned out.
With KiraPati’s new decor, Ichika has a flash of inspiration for their upcoming Christmas party. After that, Yukari has a request for Ichika. 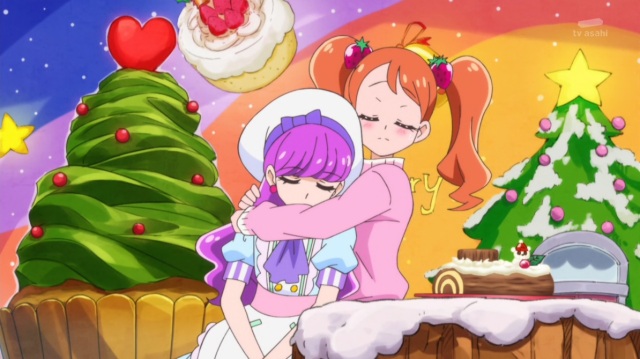 After that, it is time for KiraPati’s Christmas party. There are plenty of familiar faces who show up to celebrate. 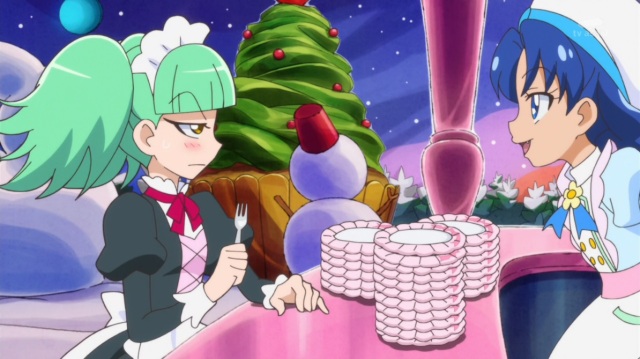 Bibury gets into the spirit of things, though she doesn’t openly admit it

As the party continues, the KiraPati girls decide to share a few words with their guests. For the most part, they thank their guests for the continued support of KiraPati. Then comes Yukari’s turn… 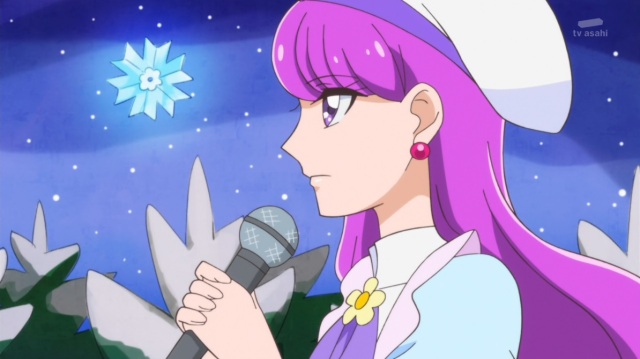 Yukari announces that she will go to study abroad

Yukari tells everyone she intends to study abroad, at the Kingdom of Confeito. Before, Yukari was just bored with life, but that changed thanks to the friends she has made through KiraPati. She wants to go to Confeito to study sweets even further.
This news seems to come as a shock to everyone, but nobody protests. Akira even leads the applause for Yukari afterwards.
After the party, Pekorin seems to be the only one who is upset with Yukari’s announcement. Ichika even says she will wholeheartedly support Yukari’s dream. 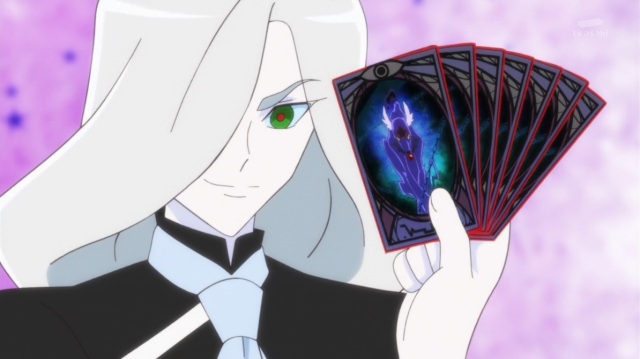 It’s about time for Elisio to show up

Worrying about Yukari’s future gets put on hold for a little while, as Elisio arrives. 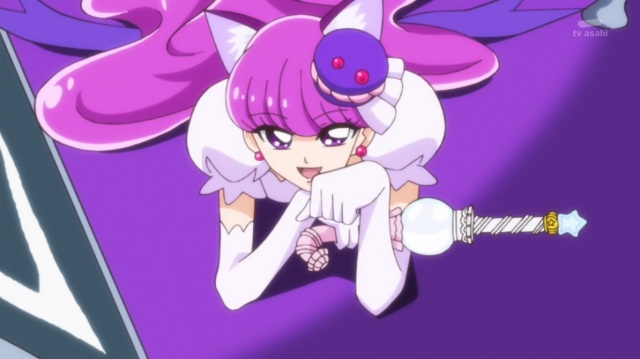 As PreCure fight Elisio, Macaron says that no matter how far apart they are, their hears will always be together. 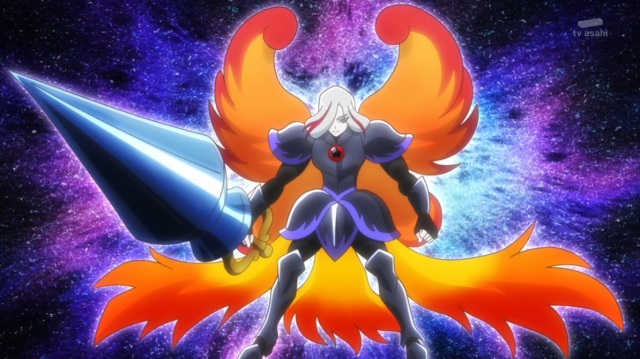 Elisio’s battle attire for this episode

Elisio is defeated in the typical way, and he retreats. It seems that these repeated defeats are really taking a toll on him… 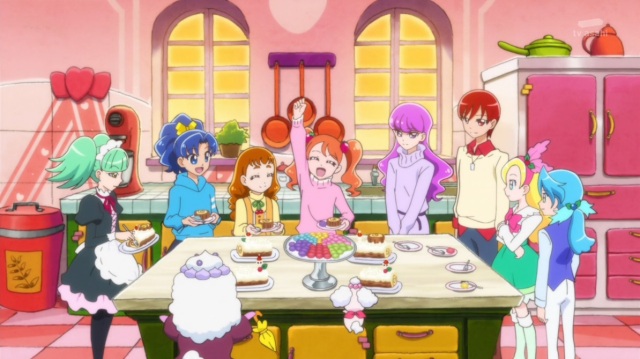 After all that, the group in the screenshot enjoy Yukari’s macarons together. Akira says that this is definitely Yukari at ‘her most delicious… and prettiest’.
However, Ichika is unable to hold back her tears, and that ends up setting off both Himari and Aoi as well. Yukari hugs them, saying that they will always be together.
The episode ends with Noir looming over a barely conscious Elisio, calling him his ‘cute doll’ and asking if he will still fight for him.

I know we’ve still got at least a few more episodes to go before KiraKira ☆ PreCure a la Mode ends, but I feel pretty confident in saying that it peaked with episode 25, and again with 35.
This definitely felt like a missed opportunity for more AkiYuka moments – I suppose we did get Akira calling Yukari pretty – but it is entirely possible we’ll get something more before the conclusion of the season.

I don’t really get why Yukari has chosen to go abroad to Confeito to study sweets. Ciel taught her how to make perfect macarons – surely it would make more sense for Yukari to go to Paris to learn the same stuff that made Ciel a prodigy.

This batch of character-focused episodes just hasn’t been as strong as ones we have had before. I feel that this is the weakest Yukari episode. Still, we might have some more interesting surprises in store for the final few episodes.

Looks like Elisio will be making a final stand in the next episode.