Girls’ Last Tour is a twelve-episode anime adaptation of the manga series by Tsukumizu. The anime was directed by Takaharu Ozaki, and written by Kazuyuki Fudeyasu. The studio that produced the show was White Fox.
Girls’ Last Tour aired during the autumn 2017 season of anime, and it is available to watch on HIDIVE in the UK. 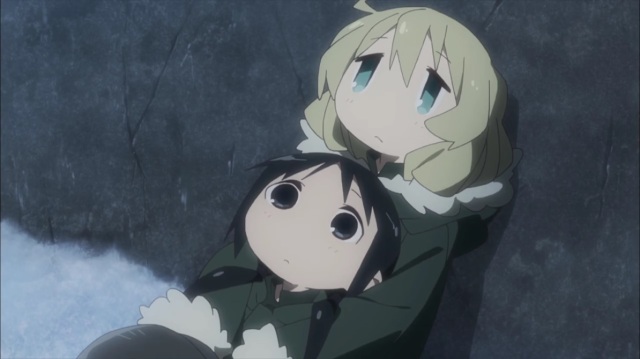 The main protagonists, Chito and Yuuri

Girls’ Last Tour simply focuses on two girls – Chito and Yuuri – as they travel through a post-apocalyptic wasteland, surviving day to day. That’s pretty much all there is in terms of plot.
Regardless of that, Girls’ Last Tour successfully manages to keep things compelling throughout all twelve of its episodes. Chito and Yuuri themselves are key parts of this.
They effectively play well off of each other. Chito is the level-headed member of the pair, whereas Yuuri is easy-going. Chito is usually composed, but it is pretty easy for her to be riled by Yuuri.
Regardless, the pair pretty much could never be without each other.

Part of what makes Girls’ Last Tour so enjoyable is seeing how Chito and Yuuri react to the discoveries they make on their journey. There are plenty of hints as to what the world was like before the apocalypse, and often these are items that civilisation as it currently is may take for granted.
The girls’ discoveries also often spark philosophical discussions – such as what it means to be alive, or hopelessness, stuff like that – though Chito and Yuuri are probably completely unaware of what philosophy is.
Whilst the show has a bleak setting, it is actually a really comfy show to watch. It may be set after the end, but that is of little concern to the main protagonists. Episode 5 is a stand-out example of this, as the girls simply imagine what their own house would be like.
Episode 5 also has another stand-out moment involving the sound of rain – that whole sequence is beautiful.
Whilst the show is more often than not comfy, it does also manage to throw in some peril every so often. Whether it is precarious structures or man-made weaponry, the girls’ journey isn’t always an easy one.

Score: 10/10
Chito and Yuuri’s adventure through a post-apocalyptic wasteland proves to be a compelling experience with every episode, and the two central characters have a genuinely great relationship.

I enjoy writing, manga, anime and video games, so naturally here on my blog, you will find anime reviews, Nintendo news and other such things that I deem interesting.
View all posts by Rory →
This entry was posted in Rory's Reviews and tagged Autumn 2017 Anime, Chito, drama, Girls' Last Tour, Rory's Reviews, science fiction, Yuuri. Bookmark the permalink.