Konohanatei sees all kinds of guests, and episode 9 of KONOHANA KITAN is no exception to that rule. Unlike previous guests, however, the one that visits the inn this time around is one that should be revered.

Before the main event, some silliness featuring a turtle

The episode begins with Yuzu and Sakura coming back to Konohanatei with a turtle in tow. They saved it from trouble, though Sakura ended up injuring it in the process…
We touch upon some Japanese mythology – in this case, Ryugu Castle, or the shrine of the sea god. It is referred to both ways here.

Turns out fox girls don’t do so well underwater…

The turtle offers to take Sakura and Yuzu to the shrine of the sea god, but they struggle to breathe underwater. He also tries to take them via a pond, which really doesn’t work out.
He tells Yuzu that she wouldn’t have to work at the shrine, but Yuzu turns him down as she wouldn’t know what to do with herself. She has also learnt lots from the varied guests they’ve had.

The turtle is then invited into Konohanatei, though it seems that Kiri and Natsume want to make him part of the menu. He flees pretty quickly after that.

Now for the main event: an unannounced guest. 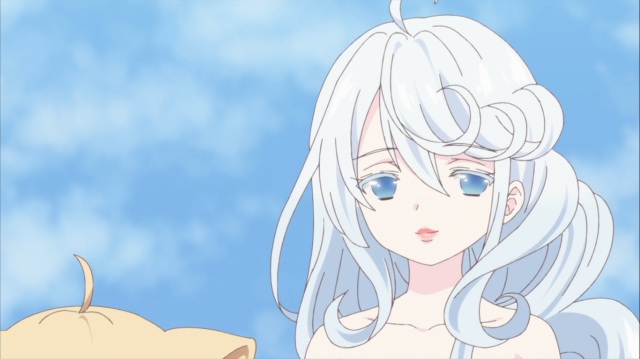 Ren reveals to Yuzu that the guest is one of the highest gods, Awanami. With Okami away for the time being, she decides to let Kiri know. Kiri decides that both Ren and Yuzu should tend to Awanami.

Ren pretty much chases Yuzu away, as it has always been her dream to serve a high-ranking god. It is Natsume who tells Yuzu that, and also helps her to realise that she is Awanamiokami from the Kamiumi myth. She also happens to be the goddess of water bubbles.
In fact, Ren discovers there are quite a lot of bubbles as she scrubs her back. When she rinses her off… well, that’s when things get interesting.

Yuzu says she’ll go tell Kiri, but Ren insists that she doesn’t do that. Instead, she wants to handle the situation together with Yuzu and Natsume.

Yuzu and Natsume run around Konohanatei, rounding up the mini Awanamis where they can. Okiku and Urinosuke get caught up in it as well.
Yuzu chases one inside, and well, this happens: 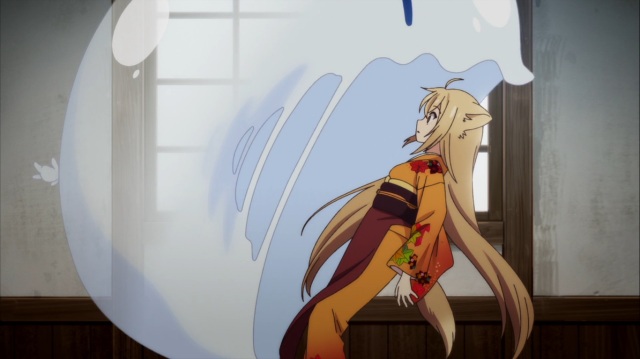 You know, this is kind of horrifying

The mini Awanami that Yuzu is chasing turns around and just swallows her whole. Inside the bubble, Yuzu has visions of the creation of Japan – again, going back to the mythology that was mentioned earlier.
She is snapped out of it by Satsuki’s voice.

Moments later, these two are on the floor

Satsuki and Kiri just happened to discover Yuzu floating in a bubble in the middle of the hallway, which naturally leads to Kiri wanting to know what has happened. Yuzu is about to take the blame for everything, but Ren puts a stop to that. 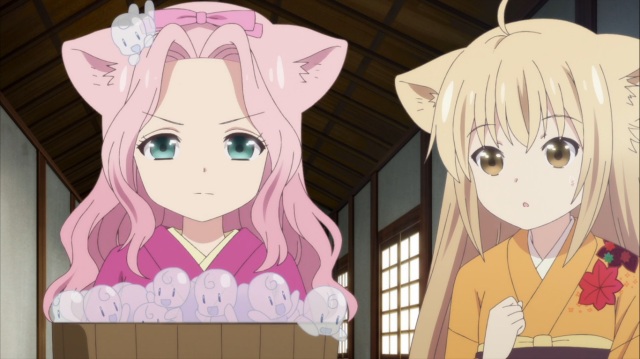 Ren explains what happened and apologises

Ren asked Yuzu not to tell Kiri, and that’s it. She never said that she should take the fall for her. Eventually, they are able to get almost all of the mini Awanamis back together. However, one still eludes them.
Fortunately, Kiri is on the case.

Sakura had the last mini Awanami

Kiri tells Sakura that Awanami is going through a rebirth, and the mini one she is holding on to is her soul, child and memory. Sakura is persuaded to return it, and Awanami is able to go back to her normal form.

With Awanami back in one piece, the episode ends after Okiku and Yuzu consider the hallucinations they saw whilst trapped in bubbles.

This was a fun episode. Err, actually, I don’t have much else to say about it really. Satsuki’s reaction upon hearing that Yuzu would rather stay at Konohanatei was pretty good, and Kiri teasing her a little over it was fun as well.
Of course, Awanami’s visit was the main event, and that lead to hilarity ensuing. It did result in another very brief moment between Satsuki and Yuzu, but I’m still waiting for their relationship to develop past the point it is currently up.
Not having read the original manga, I don’t know if that will actually happen or not, but I can certainly hope so.
Whilst Ren and Natsume did get a moment between them, they didn’t exactly steal the show this time around. They make a great pair, but there are times that I feel that they are stealing screentime from other potential couples.
Fortunately, that’s not the case for this episode. I’d say we got just the right dosage of Ren & Natsume this time around.
As for Yuzu & Satuski… well, I still want more from them. This is something I will probably repeat until it actually happens. There’s still a handful of episodes to go at the moment, and who knows – it might pull a Hina Logic -from Luck & Logic on us and give us the best stuff in one of it last episodes.
I just guess I’ll just have to be patient until then.

I enjoy writing, manga, anime and video games, so naturally here on my blog, you will find anime reviews, Nintendo news and other such things that I deem interesting.
View all posts by Rory →
This entry was posted in Episodic and tagged Autumn 2017 Anime, Episode 9, Episodic, Fantasy, Kiri, Konohana Kitan, Natsume, Ren, Sakura, Satsuki, slice-of-life, Yuzu. Bookmark the permalink.