The eighth episode of KONOHANA KITAN focuses on a few guests who just happened to have wandered into the place where Konohanatei exists.

The episode starts with a girl washed up on a beach. Yuzu is the one who discovers her, and the girl claims that she was shipwrecked. That turns out to be a lie, and she also lies about being a mermaid.
The girl confesses to being a liar, which has resulted in her isolation. She also mentions how she likes to draw.

The girl may be a liar, but she didn’t deceive Yuzu

Just before the girl takes her leave, Yuzu tells her how there is someone out there who likes her stories. It’s just that she may have not met them yet. Yuzu says it so much better than I’ve written it down here – as we’ve seen before, she is very good with words when it comes to that kind of thing.

After listening to Yuzu, the girl returns back to wherever it was she came from. When she wakes up, she discovers that she’s not alone.

Matsumoto, and her classmate Tanabe

Matsumoto wakes up to someone calling her name. It is Tanabe, the girl who sits in front of her in class. It seems that she cares for Matsumoto, and happens to enjoy her stories as well… 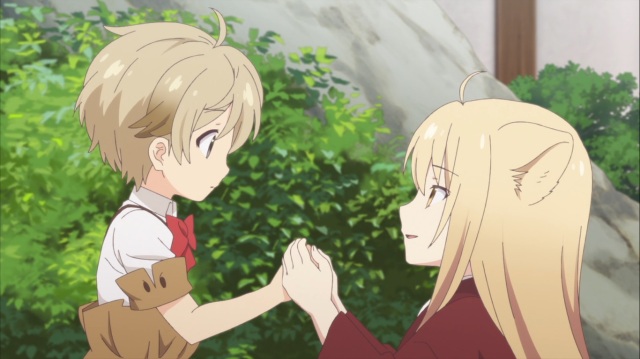 This is what it looks like when Yuzu gets mad

Next up is a young boy who goes by the name of Kaito. He seems to be a bit of a brat, but some gentle words from Yuzu soon has him apologising. Also, the only one who picked up on Yuzu being angry was Satsuki.
Kaito returns to the real world, where he finds himself being taken away from his parents.

Kaito is sad to depart from his parents

After that, Kaito finds his way back to Konohanatei once again. He’s not happy with his new life, so he ran away from home.
There also happens to be stubborn guest who refuses to go home staying there at the same time as well. 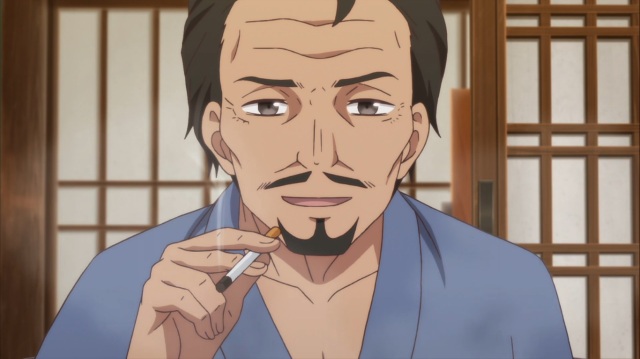 This guest refuses to go home

Ren argues with the guest, but when she doesn’t get anywhere, Kiri takes over. Turns out the man was in an accident, and was convinced that he had died. That’s not quite true – apparently Hell doesn’t want him just yet.

Kaito forms an odd bond with the stubborn guest

The boy has hope and a future, whilst the man has a family. In that way, they are similar, hence an odd bond.

This is where I’m going to stop my coverage of this episode, because the way the end plays out is amazing. I don’t want to spoil it for others here, so if you’re curious enough than you’ll just have to watch the episode yourself.
I’ve said before that I want to see the relationship between Yuzu and Satuski develop, but if KONOHANA KITAN is going to give us amazing episodes like this one, I don’t mind so much. Besides, we did get that small moment where Satsuki recognised that Yuzu got angry.

To reiterate something I’ve said before: KONOHANA KITAN is just so good. Easily one of the best this season, and I look forward to seeing what more it has for us in the future.

I enjoy writing, manga, anime and video games, so naturally here on my blog, you will find anime reviews, Nintendo news and other such things that I deem interesting.
View all posts by Rory →
This entry was posted in Episodic and tagged Autumn 2017 Anime, Episode 8, Episodic, Fantasy, Kiri, Konohana Kitan, Natsume, Ren, Sakura, Satsuki, slice-of-life, Yuzu. Bookmark the permalink.