Last episode saw the introduction of a new warrior thanks to a certain pair of earrings, and we see how well she fares against Goku in this episode.
Oh, and episode 115 starts with a cameo from Kiyoshi Hikawa, the singer of the current theme song, ‘Genkai Toppa x Survivor’.There’s supposed to be a rule against using outside items in the Tournament of Power, but since Zen-Oh thinks Potara fusion looks cool, it is fair game.

Kefla overwhelms Super Saiyan God Goku, quite literally throwing him around the arena.
When Zen-Oh gives the OK for the fighters to use Potara fusion, it is considered by a couple of the other universes. However, due to various reasons, they don’t use it.
We also get to see how the other Universe 7 fighters are getting on.

This animation gets used at least a couple of times…

With Goku getting overwhelmed in his Super Saiyan God form, he sees no other choice but to step it up a notch. He turns Super Saiyan Blue.

With Goku powering up, Kefla figures that she should do the same. She turns Super Saiyan.

Goku and Kefla start fighting, and the arena threatens to crumble beneath them. It seems that their power doesn’t escape the notice of Jiren.
Kefla tells Goku that she intends to surpass him and become Super Saiyan Blue. At the moment, Goku and Kefla seem roughly equal.

Kefla as she is about to unleash another energy blast

With Super Saiyan Blue on its own not being enough for Goku to overpower Kefla, he powers up even more. 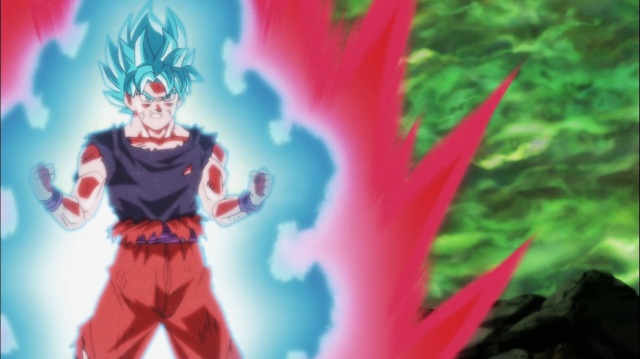 With Goku now in the strongest form he consciously has access to, he declares that the true fight starts now.

It seems like Goku’s Kaio-Ken power up has given him the edge against Kefla, and he manages to hit her with a blast of energy. However, she emerges from the rubble eager as ever to defeat Goku. After all, she does have Saiyan blood.
Kefla launches more energy blasts, but it turns out they were only a distraction.

Kefla attacks Goku from behind

Kefla’s attack knocks the Super Saiyan Blue out of Goku, and he falls to the ground in his base form. All Kefla has to do is knock him out of the arena and she will have won.
However, Goku stands up once more.

Kefla ready to blast Goku off the stage

Kefla launches her attack, sure of victory. However, Goku has no trouble countering it. Much like during his fight with Jiren before, Goku has once again managed to surpass his limits. 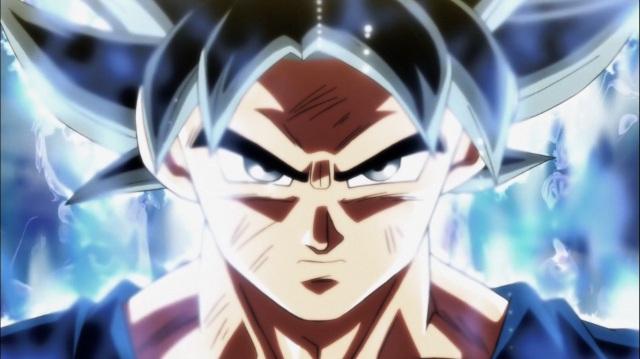 Whilst Super Saiyan Blue Kaio-Ken is the strongest form Goku consciously has access to, Ultra Instinct looks to be his strongest form full stop. It’s just that he doesn’t seem to have control over when he can use it – yet.
The episode ends with the narrator informing us that there are 19 minutes left of the Tournament of Power.

Well, I suspected that Goku would awaken Ultra Instinct once more due to Kefla, and I was proven right. As much as I am a fan of Kefla, I don’t really fancy their chances against Goku’s latest power-up.
Let’s face it, the climactic battle of this arc will almost certainly be Goku vs. Jiren. Still, Caulifla and Kale have been a highlight for me, and I did enjoy this episode.
Whilst it seems very likely that Kefla will be eliminated from the Tournament of Power sooner rather than later, I get the impression that we will be seeing more from them after the Universal Survival arc has concluded. The fate of Universe 6 is uncertain, but there’s at least a couple of people who are interesting in bringing it back should it be erased from existence.

Kefla’s fight isn’t over yet, though. I don’t know how well she’ll fare against Goku’s Ultra Instinct, but the next episode preview made it clear that she isn’t going down without a fight.

I enjoy writing, manga, anime and video games, so naturally here on my blog, you will find anime reviews, Nintendo news and other such things that I deem interesting.
View all posts by Rory →
This entry was posted in Episodic and tagged Autumn 2017 Anime, Caulifla, Dragon Ball Super, Episode 115, Episodic, Kale, Kefla, Son Goku. Bookmark the permalink.

1 Response to Dragon Ball Super Episode 115: A Foe Worth Defeating