Caulifla and Kale’s fight against Goku continues as the Tournament of Power progresses onward, as they want to defeat him and achieve the Super Saiyan 3 transformation. Naturally, Goku isn’t going to make things so easy for them, but the two Saiyan ladies have an ace in the hole.

Caulifla is confident that by uniting her strength with Kale, they are the strongest in all the universes

At the end of the previous episode, Kale’s desire to become even stronger drove her berserk once again. However, Caulifla grabs her hand and tells her that Kale is the only one that can fight alongside her. The hand holding and a motivational speech return Kale to her senses.

Kale may not be in her berserker state any more, but it seems that she is able to retain that power – even Goku finds himself shaking. The fight resumes, and Goku struggles to keep up with Caulifla and Kale’s impressive display of teamwork.

The battle rages on, and Caulifla is even able to react to Goku’s Instant Transmission. At this point, Goku has recovered enough to power up even more.

Kale’s reaction to Goku going Super Saiyan God is great: “Red or blue, it’s all the same! Let’s beat him up!”
I have to say, seeing Kale with more confidence is something I can certainly get behind. Caulifla laughs as well, and pats Kale on the back before the two of them attack Goku.
Goku manages to turn the tide of battle, managing to hit Caulifla with an energy blast.

Kale holds Caulifla after she was hit with Goku’s attack

Goku compliments the two Saiyan ladies on their skills, though he tells them that their end game needs work. Goku charges up a Kamehameha, and blasts Caulifla and Kale with it.
It seems like they are about to be eliminated, but this moment is when they bring out their ace in the hole. It was something that they were given before the Tournament of Power began. 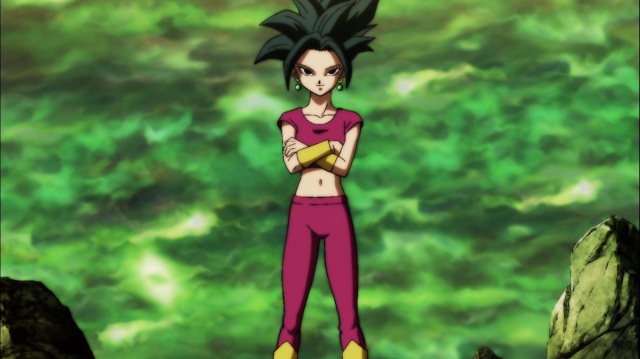 Using Potara earrings, Caulifla and Kale fuse and become Kefla. Goku can’t sense a limit to her energy, and he is soon on the receiving end of her attacks.
However, we’ll have to wait until episode 115 before we can see more from Kefla.

The bond between Caulifla and Kale is as strong as ever, and the way they kept holding hands whilst fighting Goku is something I like quite a lot. Even if Toei didn’t spoil the Potara fusion in their preview last time, the whole talk of the two Saiyans combining their power would have been a dead give away, methinks.
I know it is incredibly unlikely, but can you imagine if Kefla eliminates Goku? I bet that would cause a huge uproar. If anything, Kefla’s presence will be to have Goku achieve Ultra Instinct once again.

Still, I enjoyed this episode a lot. Caulifla and Kale are great characters, and I’m glad that they weren’t introduced just to be fodder. As you might expect, I am very much looking forward to seeing what Kefla is capable of next episode. If the episode title is any indication, Goku is not going to have any easy time.

I enjoy writing, manga, anime and video games, so naturally here on my blog, you will find anime reviews, Nintendo news and other such things that I deem interesting.
View all posts by Rory →
This entry was posted in Episodic and tagged Action, Autumn 2017 Anime, Caulifla, Dragon Ball Super, Episode 114, Episodic, Kale, Son Goku. Bookmark the permalink.

1 Response to Dragon Ball Super Episode 114: Strongest in All Universes