KONOHANA KITAN Episode 4: They Grow Up So Fast

Episode four of KONOHANA KITAN is about dreams and growing up. We start with a more surreal segment, followed by one that probably got a few viewers somewhat emotional.

We start with an egg managing to attach itself to Ren’s belly, under her clothes. She wakes up and believes she is pregnant, and quickly blames Natsume. She tells Natsume to take responsibility, and Natsume is totally fine with that.
The egg refuses to be removed, so Ren is told to take the day off. 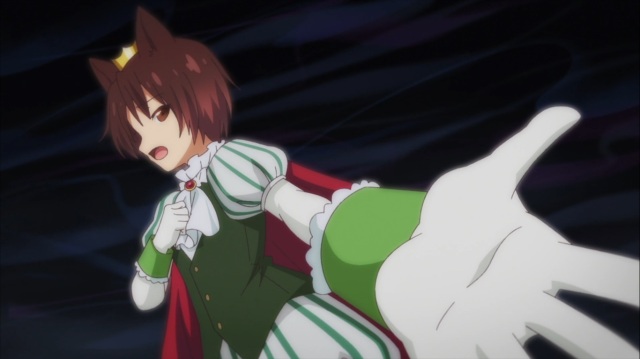 Natsume, the ‘prince of stars’

After Ren falls asleep, she dreams of Natsume being a prince of the stars, and saying that she will leave her. Ren starts crying as Natsume leaves, but then things get brighter and the nightmare becomes a pleasant dream.

Ren wakes up to find Natsume checking on her, and the egg detaches itself. It then attaches itself to Satsuki, who is less then pleased with that development.

Satsuki doesn’t want to skip work for this nonsense

Satsuki ends up being told to take time off. She goes to bed, but struggles to fall asleep as she can hear everyone else struggling to keep things running smoothly.

Satsuki has a nightmare involving her sister

Considering the ‘history’ Satsuki has with her sister, it is only natural for her to have a bad dream about her. Satsuki wants to know why she wasn’t chosen to become a priestess. However, the bad dream soon goes away.

Satsuki wakes up shortly after that, and then the egg detaches itself and hatches.

It’s a baku – a spirit said to eat dreams

Natsume names the creature Urinosuke, and then it seems to bond with Sakura.

Moving onto the second half of the episode, then.

Yuzu returns from a shopping trip, only to have Satsuki thrust a baby into her arms and tell her to make it stop crying. Yuzu is able to get it to settle down, and the others then go and look for the baby’s mother.

Apparently Satsuki managed to lose sight of the baby whilst looking away for only a moment. She just assumes that the mother found it. The problems aren’t over just yet, though, as a lost child appears. 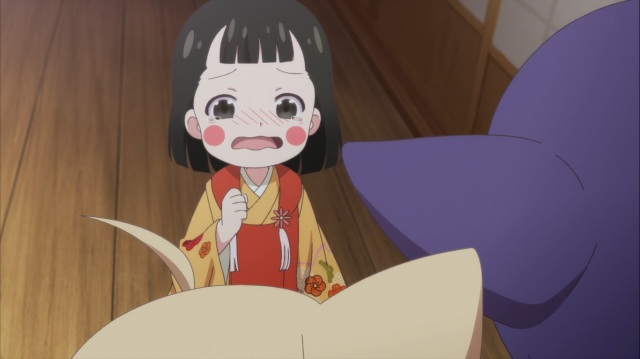 Yuzu guesses this girl is Shino

Shino has an accident, meaning she has to go bathe and her clothes need to be washed. Yuzu accidentally trips into the water, which has both Shino and Satsuki laughing – Yuzu is quite a fan of Satsuki’s laugh.

Later on, a slightly older Shino gets stuck in a tree. Natsume helps her out, and Shino ends up falling for her – though she doesn’t realise that Natsume is female.

Next up, Ren encounters Shino who is crying because her mother made her a furisode – the most formal style of kimono worn by young unmarried women in Japan. She finds it to be old fashioned, but Ren gives her some fashion advice.
Shino also has her heart broken when she discovers that Ren and Natsume are together.
Back to the elderly guest, and Kiri reveals that she lost her daughter when she was young. The old woman has a doll that she dressed in wedding clothes in hopes that the deceased daughter could marry in the afterlife. 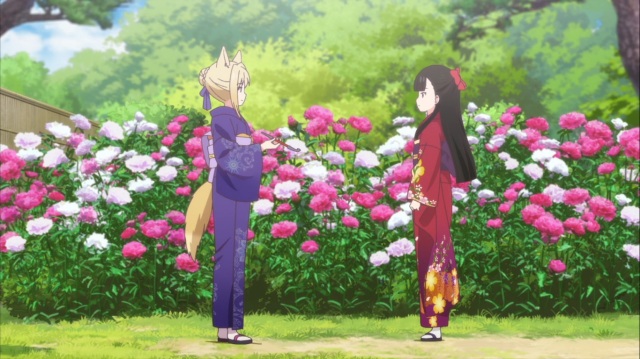 Shino accuses Kiri of keeping her mother trapped in Konohanatei

We now get rebellious Shino, who thinks Kiri is keeping her mother trapped. However, Kiri said she entered the inn of her own free will, and they are giving her a pleasant dream.
Shino’s mother completes the final kimono, and their time together comes to an end – well, briefly. The old woman thanks Kiri for her experience, and then departs so she can be with her daughter.

I know this is a poignant moments, but all I can think about here is Led Zeppelin’s ‘Stairway to Heaven’.

The episode ends with Kiri saying that the old woman said thanks for everything everyone had done for her.

That first half was certainly on the more surreal side of things, though it gave us some great moments between Ren and Natsume as well as Yuzu and Satsuki. It’s also worth noting that you may be more aware of the spirit known as ‘baku’ than you may think – Drowzee from Pokémon is known for eating dreams. Touhou also has a baku character, who goes by the name of Doremy Sweet – she first appeared in the fifteen official game, Legacy of Lunatic Kingdom.

That second half though… I suspect a few of the people who watched were victims of onion-cutting ninjas. It was just beautiful.
KONOHANA KITAN has proven that it can do heart-warming, tear-jerking and comedy. I’m pretty much repeating my sentiments from previous posts here, but this show is an incredible experience. I eagerly look forward to seeing what else it has in store for us.

I enjoy writing, manga, anime and video games, so naturally here on my blog, you will find anime reviews, Nintendo news and other such things that I deem interesting.
View all posts by Rory →
This entry was posted in Episodic and tagged Autumn 2017 Anime, Episode 4, Episodic, Fantasy, Kiri, Konohana Kitan, Natsume, Ren, Sakura, Satsuki, slice-of-life, yuri, Yuzu. Bookmark the permalink.

2 Responses to KONOHANA KITAN Episode 4: They Grow Up So Fast