The previous episode of URAHARA ended with a crowd approaching Rito, Mari and Kotoko, and we were left unsure as to whether they were friendly or not. Episode three reveals the situation, and also Rito finds herself in a bit of slump.

Turns out there are other people trapped in Harajuku

The episode begins by revealing that there are other people who are trapped in Harajuku. The crowd that appeared at the end of the last episode was actually harmless. Kotoko spots something on Rito’s hand, but it soon disappears – that is something that comes up again towards the end of the episode. For now, Rito and the others decide to go home.

Mari thought the girls would have Harajuku to themselves

Back at Park, the girls discuss the other people in Harajuku. Kotoko tunes in to the radio and all they really learn is that nobody outside can explain the bubble surrounding Harajuku, as well as a lack of contact. Rito decides to go and take a walk to see if anybody she knows is around. Mari and Kotoko accompany her, whilst they have Misa stay at Park.

Rito is quite the artist

The girls stop to admire some art on a wall – said art happens to have been drawn by Rito. Whilst doing so, they overhear some people talking about the wall – in this case, the bubble. Rito and the others to go and see the commotion, and Mari is immediately reminded of her reaction towards it.

Kotoko is there to keep her friends reassured

Rito feels somewhat responsible for trapping the people in Harajuku. Though they were trapped, Mari says that they were able to protect them as well. As they wander through Harajuku, they happen upon a group of people merrily chatting and eating crêpes. 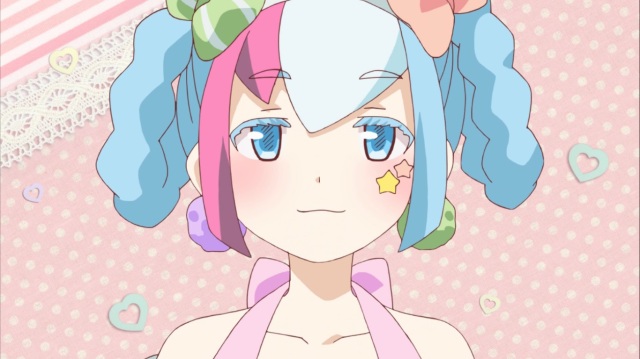 This girl hands out crêpes to Rito and her friends

A girl is handing out free crêpes to everyone, simply because she wants to see people smile. It just injects a little happiness into the situation that people find themselves in. Inspired the crêpe girl and her shop, the girls decide to reopen Park. Kotoko starts making sweets, whilst Mari gets to work on the clothes.

Whilst Mari and Kotoko get to work, Rito finds herself in a slump. She decides to go and take another walk, and ends up back at her art. There, the crêpe girl passes by whilst doing her deliveries and stops to talk.

Rito tells the girl that she’s in a slump, and the crêpe girl tells her that she should just draw what she wants. After their conversation, the crêpe girl introduces herself as Sayumi and takes off to finish her deliveries. Rito is struck by inspiration, and Mari and Kotoko soon arrive. The two of them want to help Rito with her next drawing, so they go back to Park to grab supplies.
However, a stray Scooper appears, so the girls have to deal with that first.

Rito and Mari advance, whilst Kotoko scans the area for any signs of the Scooper. Rito is less than pleased about having to play hide-and-seek, but she is more willing to actually use her cannon. Kotoko even adjusts it so it has a rapid fire mode, due to going after a smaller target than last time.

The Scoopers seem to be going after Rito’s art, but the girls soon take care of them. When defeated, they turn into macarons this time around. Well, macarons and ‘Shirako’.

The girls end up taking the Shirako back to Park, since they should be safe enough. After that, they are able to go back and help Rito finish her next piece of art.

Rito wanted to draw her old family home back from before she lived with her grandma because she didn’t want to forget it. Mari and Kotoko say how they would like to live together with Rito in their own house, whilst running Park.
The new art draws a crowd, including Sayumi. Sayumi introduces herself to Mari and Kotoko – Mari blushes after Sayumi talks to her.
The girls then go to prepare for Park’s opening, and Kotoko spots something odd as they do so.

A purple spot appeared on Rito’s hand at the beginning of the episode, and now one one Mari’s leg

The purple spot disappears just as quickly as it appeared, and Kotoko is unsure about it. One also happens to appear on her neck as the episode ends…

I enjoyed this episode. I liked Sayumi, and it was neat how she was able to help Rito out with her artist’s block. Actually, Rito’s drawings were pretty good, as well.
I’m going to guess that the purple spots that have been appearing on the girls’ bodies may have some connection to a particular scene we saw during the first episode – they’re probably not good.
It’s about that time of the season that the three-episode rule comes into effect for some people – doesn’t really apply to me here, since I’ve really enjoyed what URAHARA has to offer and I’m looking forward to seeing more.

I enjoy writing, manga, anime and video games, so naturally here on my blog, you will find anime reviews, Nintendo news and other such things that I deem interesting.
View all posts by Rory →
This entry was posted in Episodic and tagged Autumn 2017 Anime, Comedy, Episode 3, Episodic, Fantasy, Kotoko Watatsumugi, Mari Shirako, Misa Maruno, Rito Sudo, Sci-Fi, URAHARA. Bookmark the permalink.