KiraKira ☆ PreCure a la Mode‘s 34th episode is one that focuses on Yukari and Ciel. However, Yukari’s appearance during most of this episode is a little different from usual…

Yukari seems to be feline rather odd in this episode

The episode begins by showing us that Diable is resting in order to restore his power. After that, we see that Yukari’s crystal cat leads her to a place where Diable’s power starts to take effect.

Yukari ends up turning into a cat

You may have guessed by this point, but this episode is on the sillier side of things. Yukari just takes the whole thing in her stride, and decides to go for a wander. She ends up encountering the three star cat from earlier on in the series, as well as a couple of its underlings – they claim that the fairies drove them from the watering hole. 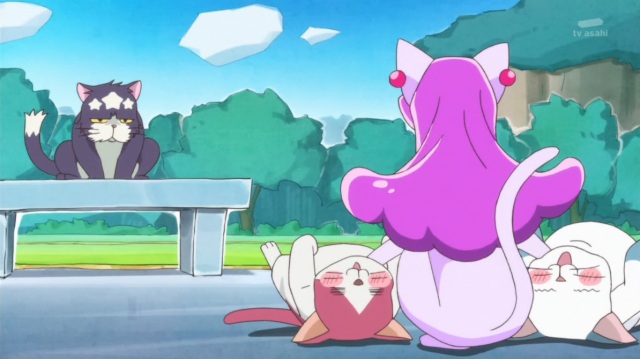 There’s a joke here about Yukari being surrounded by…. you know what, work that one out one your own.

The cats haven’t seen Yukari before, so two try to attack her – it takes Yukari no effort to overcome them. The three star cat decides to make Yukari their boss in order to settle the dispute between the cats and fairies.
Meanwhile, Yukari – or rather, the cat inhabiting her body – rocks up at KiraPati.

We also hear the fairies’ side of the story concerning the dispute, so Ciel decides to take matters into her own hands. Well, it would be more accurate to say Kirarin decides to do that – Ciel takes her fairy form, because it lets her talk to animals, I guess? 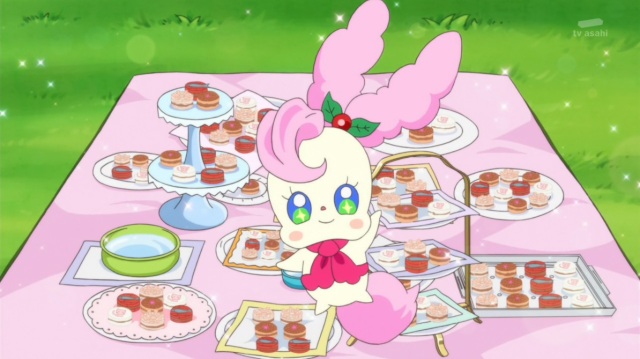 However, Diable’s power goes to work once more and the cats and fairies end up fighting. Yukari finds a gang fight like that breaking out to be boring, so she proposes a duel between leaders.

Yukari claims victory, and tells the fairies and cats to leave the town as she is the lone victor – the town is hers now. Nobody is OK with that, and Kirarin then fights back. Yukari purposely falls from a cliff, and Kirarin works out that she was making a scapegoat of herself. 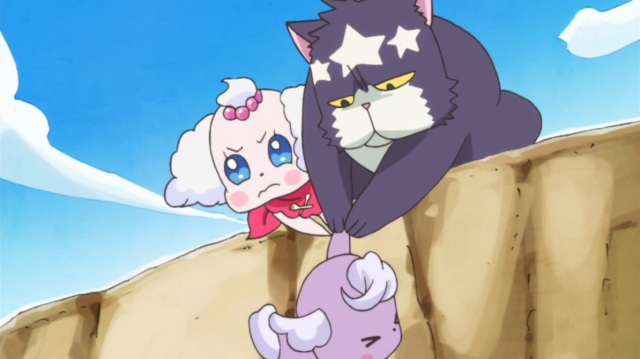 The cats and fairies cooperate to save Yukari and Kirarin

Apparently the fairies manage to forget that they can fly for a while, as they work together to form a chain with the cats to save Yukari and Kirarin. Once they are safely back on solid ground, Yukari disappears.

Cure Parfait steps in to protect Yukari from Diable’s power

Parfaits fights whilst protecting Yukari, and the other Cures soon arrive. They swiftly get themselves captured, but they are accompanied by ‘Yukari’ – the cat and the actual Yukari end up returning to normal.

Amusingly, Parfait was the only one out of the loop – the rest of PreCure were totally aware of Yukari’s body switch. With status quo restored, Parfait and Macaron incapacitate their foes and the whole team finishes them off with Pretty Cure Animal-Go-Round.

PreCure may have put dispelled his power, but Diable himself is regaining his strength

We end seeing that the cats and fairies are getting along once more.

I enjoyed this episode. It was certainly on the sillier side of things, but I am totally fine with silly. It was rather amusing seeing Yukari just get on with being a cat, simply because it was interesting.
We also have Diable regaining his power in the background. I imagine he will be the penultimate obstacle for PreCure to overcome, with Noir almost certainly filling the role of final boss.

Next time, we’ll see the bond between Himari and Aoi grow. I’m actually quite looking forward to that.