Previously, the girls of KiraPati made a new friend. In the 33rd episode of KiraKira ☆ PreCure a la Mode, they meet a new foe, and have some doubts about making sweets. 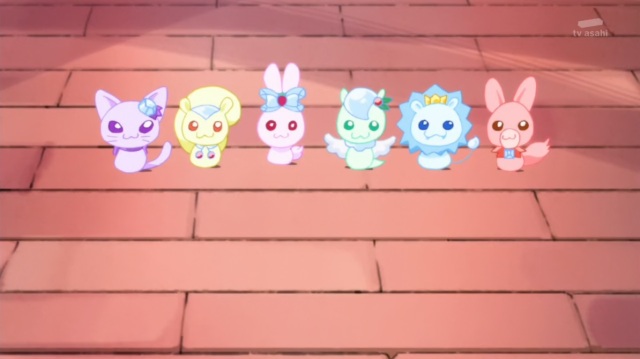 Hey look, the Crystal Animals can exist outside of stock footage

So we begin with the girls discovering that the Crystal Animals are actually sentient beings, before they go on to pay respects to Lumiere. Unfortunately, nobody knows what happened during the conflict between Lumiere and Noir one hundred years ago, but they do know that Lumiere has been watching over them. 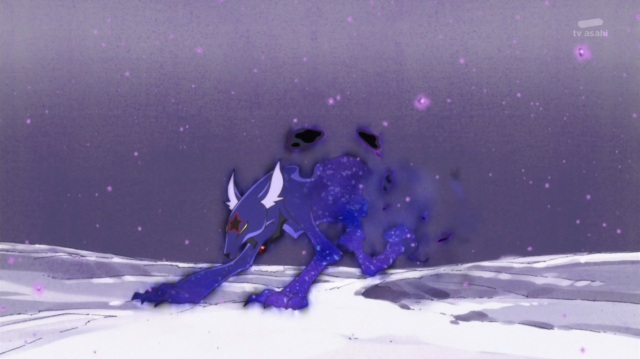 One of Noir’s loyal servants, Diable

Diable is the new foe I mentioned at the beginning of this post. He intends to put an end to PreCure for the sake of his master.

Bibury seems to enjoy the cupcakes

After the opening credits, we return to KiraPati where they are running low on cupcakes. This is partly thanks to Bibury, who is pretty much just stuffing her face with them. She is willing to share with Pekorin, though. 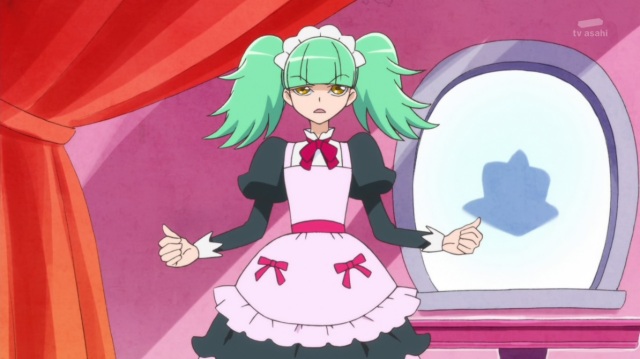 After washing her hands and doing an impression of Ichika, Bibury gets to work making cupcakes. Ciel keeps an eye on her and offers advice, and it’s not long before the kira-kiraru starts flowing.
However, a commotion outside interrupts them, and everyone goes to investigate. 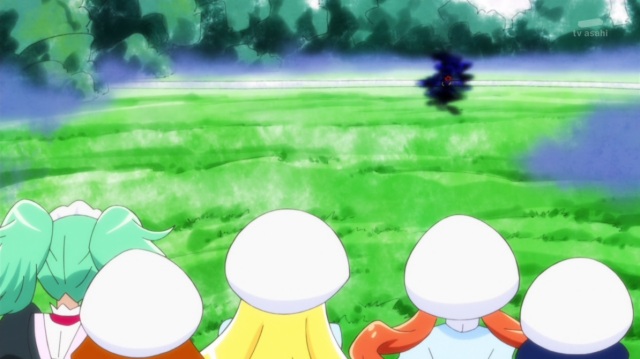 Diable’s attempts to confront the PreCure, but seems to lack the power to do so

Outside, people are at each other’s throats. The cause of this is none other than Diable, who appears before PreCure and demands their sweets. However, his power seems incomplete and he retreats.
Bibury reveals that his presence is enough to darken kira-kiraru, and it works its way into people’s hearts which results in arguments and such.
This leads to PreCure falling into depression over their sweets bringing such negative emotions to people. The Crystal Animals are having none of that, though. 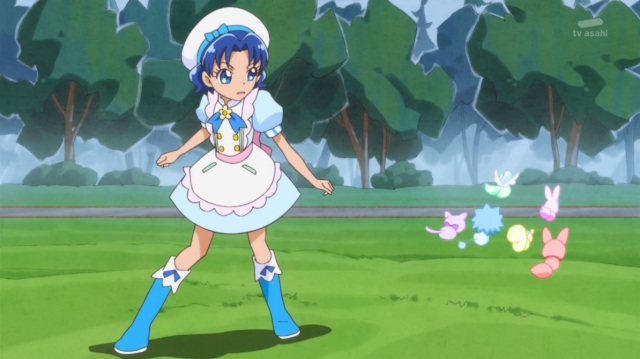 The girls then go and search for the missing Crystal Animals, and in the process of doing so realise that there are plenty of good things about sweets.

The girls get over their doubts about making sweets, and find that the Crystal Animals were waiting for them at KiraPati the whole time. It doesn’t take long for Diable to rock up after that, and that means transformation time.

Diable is able to attack from the shadows and get the better of PreCure for a short while, and even manages to return the Crystal Animals to their crystal forms. However, Cure Whip states that they will continue making sweets and their new finishing attack follows that.
Diable is defeated, but he’ll return again.

Back in KiraPati, the girls fuss over their Crystal Animals a little more. Ciel returns to her own shop, and takes Bibury along with her.

Bibury is definitely a great addition to the cast, and I look forward to seeing more of her interactions with the other characters – particularly Ciel. In fact, Bibury’s presence was pretty much the thing I enjoyed most about this episode.
We also got an amusing moment that answered a question I had about Bibury after the previous episode – her age. Apparently she’s more than 100 years old, though she doesn’t disclose her exact age.

I do quite like Diable’s design, but he hasn’t exactly presented himself as a major threat – though perhaps that can be justified by him not being at full power at the moment. It seems like Diable could potentially take some focus away from Grave and Elysio – there has been precedent for that kind of thing before in KiraKira ☆ PreCure a la Mode.

The girls getting gloomy about making sweets didn’t really leave much of an impression – it was obvious that they would get over it sooner rather than later. It didn’t really add any development to their characters, either.

I give this episode a shrug of the shoulders and a ‘it’s all right, I guess’ – there have been much better episodes, but I wouldn’t exactly call this a bad episode, either.

The next episode looks like it will be delightfully silly. The fact that Yukari is the focus of it makes it one that I am looking forward to.

Finally, as I type this it is around 8:20pm on September 24th. September 24th is the day of Akira Kenjou’s birthday, and apparently I’ve decided to make it a tradition to mention it in a post whenever it is a character’s birthday.