Princess Principal‘s 10th episode covers case 22, in which Ange, Dorothy and Beatrice spend their Christmas carrying out a mission. Their mission has them meet with an old acquaintance.We start with an introduction to ‘the Farm’ – a training facility for spies that both Ange and Dorothy attended. Their mission involves a third student of the Farm, a lass who was always second best to Ange.

Ange, Dorothy and Beatrice sneak their way into Eleanor’s place, but Beatrice’s inexperience quickly gets her caught.

Dorothy tells Eleanor to cut Beatrice some slack, as she wasn’t trained at the Farm. After their reunion, the girls quickly get to work carrying out their mission.
Beatrice is able to prove her worth soon enough when the girls are faced with a pack of guard dogs. She can change her voice, and she can also use her voicebox to emit a high-pitched whistle. 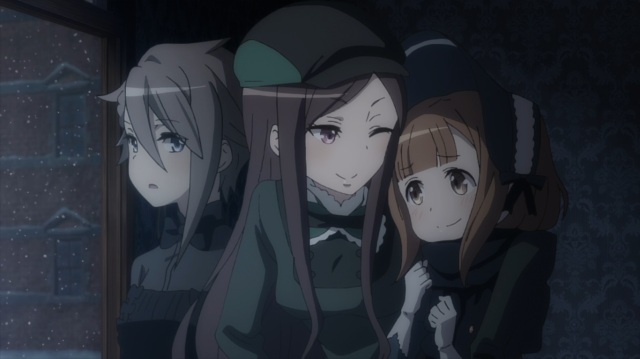 Trust me: you’ll want to savour these cute and funny moments

The girls are able to carry out their mission without a hitch, so the only thing to do afterwards his head to the pub and toast to their success – at least 17 times.

Eleanor slips off into the bathroom, where she seems to inject herself with something. She doesn’t look particularly well beforehand, either.
When Eleanor makes her way back, she finds that it is only Dorothy who is waiting for her. It isn’t long before Dorothy gets up to 21 toasts. 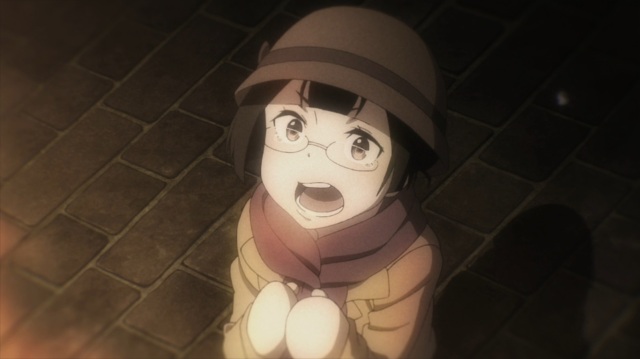 Eleanor recalls how they had an exam during one Christmas at the Farm, and how she lost track of their target. Dorothy decided that since they were going to fail anyway, that they should visit a funfair. Meanwhile, Ange wandered off somewhere.
Back to the present, and Eleanor tells Dorothy that there was a person that she has always looked up to.

Back to the present, and the possibility of Eleanor being a double agent comes up. As such, the actual reason Ange and Beatrice left Dorothy was so they could go and search Eleanor’s home for any proof of that. They don’t find anything, but Ange does ensure to leave something behind…
Eleanor discovers footprints in her room, and makes a move. This is the cue for Ange and the others to intercept her.

Once Ange and Beatrice catch up to Eleanor, Ange rushes to confront her. However, a nifty suitcase and a steam pipe allow for Eleanor to make her escape onto a train. Dorothy has a go at Ange for the actions she took, but Ange just claims she was increasing the odds of success.
Of course, the girls pursue her in the car, and Ange and Dorothy are able to board the train courtesy of the C-ball.

Remember what I said about savouring funny moments? This is another one. Turns out Beatrice isn’t very good at driving.

On the train, Dorothy confronts Eleanor. Eleanor reveals that the person she looked up was not Ange, but Dorothy. The Christmas she spent at the funfair with Dorothy was one she remembered fondly.

Dorothy and Eleanor having fun

Dorothy tries inviting Eleanor back to London, but she refuses. Dorothy doesn’t want to shoot a friend, so Eleanor responds to that by offering Dorothy a Christmas present.

I was expecting it to cut away for this scene; it didn’t

Their mission complete, Ange and Dorothy head back to HQ. En route, Dorothy realises why Ange confronted Eleanor like she did, though Ange continues to claim she was just increasing the odds of success.
When they arrive at HQ, they discover that L has been transferred. In his place is ‘the General’, who immediately gives Ange and Dorothy their next mission: 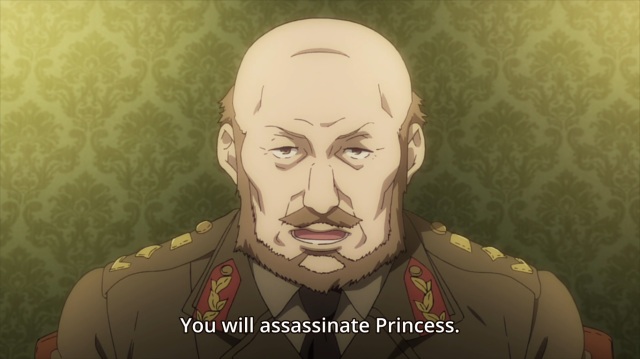 The episode ends there.

Some pretty tragic circumstances in this episode, but I still enjoyed it nonetheless. Eleanor’s suicide certainly had quite an impact, especially with it not cutting away when she took the shot.
Poor Dorothy – she’s lost another person she was close to. She got closure this time, though arguably in the worst possible way…
Eleanor seemed like an all right character, too.

The most shocking part of the episode comes from right at the end. I don’t really see Ange actually attempting to assassinate Princess, but I do believe we should all probably prepare ourselves for a tragic ending.
I’m also curious about what happened to L. His transferral seemed really sudden, and that is almost certainly suspicious.

Well, guess we’ll have to wait until episode 11 to see how events are going to unfold with this newest mission.

I enjoy writing, manga, anime and video games, so naturally here on my blog, you will find anime reviews, Nintendo news and other such things that I deem interesting.
View all posts by Rory →
This entry was posted in Episodic and tagged Action, Ange, Beatrice, Chise, Dorothy, Episode 10, Episodic, Princess, Princess Principal, Spy, Summer 2017 Anime. Bookmark the permalink.