Thoughts on Bleach Volume 54: Goodbye to Our Xcution 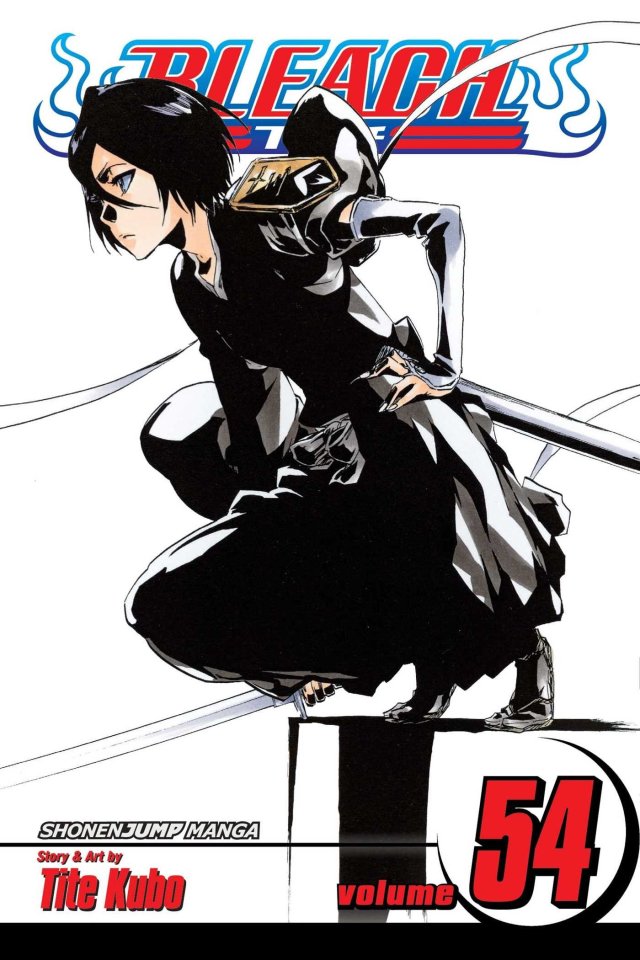 After a long struggle, Ichigo finally regains his Soul Reaper powers thanks to Rukia. But as the battle against Kugo Ginjo heats up, Ichigo learns a shocking secret behind his role as a Deputy Soul Reaper. With the truth finally revealed to him, what action will Ichigo take?

Rukia discovers she can still use her Soul Reaper powers in chapter 470, ‘Pray for Predators’, despite being stuck in a plushy. However, when she tries to use kido against Riruka, it backfires.
As Ichigo and Uryu fight Ginjo, they discover that he is able to use Ichigo’s techniques due to have stolen Ichigo’s Fullbring and spiritual pressure.

The pasts of a few of the Fullbringers is explored in chapter 471, ‘Pray for Predators 2’ The circumstances of how each Fullbringer came to possess the item they use for their Fullbring are briefly explored.
Whilst Riruka explains that to Rukia, Rukia is able to use her zanpaku-to’s ability. However, Riruka frees Rukia from the plushy and brings their battle to a close.

Riruka disappears and Rukia collapses in chapter 472, ‘Razoredge Requiem’. The focus switches to Byakuya and Tsukishima’s battle. After Tsukishima breaks Byakuya’s shikai, Byakuya uses bankai.
Tsukishima is able to get inside the bankai’s safe zone, but Byakuya immerses himself in a moment of madness and catches his foe off guard.

With their respective opponents defeated, the Soul Reapers congregate in chapter 473, ‘Enemies in the Dark’. However, there is a dimension that Yukio can’t undo: the one where Ichigo and Uryu are fighting against Ginjo.
Upon sensing Tsukishima’s defeat, Ginjo informs Ichigo that all traces of a Fullbringer’s ability disappear when they die. He also offers to tell Ichigo the story of the enemy he should truly be fighting.

After ensuring that Chad and Orihime are fine, Kisuke goes to join the others to treat them in chapter 474, ‘beLIEve’.
Ginjo tells Ichigo about the Deputy Soul Reaper badge, and how the Soul Society uses it to monitor and control. He reveals that Jushiro Ukitake was the one who purposed the plan.
In response to Ginjo’s words, Ichigo uses his bankai.

The Soul Reapers stand watching the dimension where Ichigo is fighting in chapter 475, ‘Shades of the Bond’. Yukio claims it can’t be broken, yet it is utterly demolished upon Ichigo using his bankai.
It turns out Ichigo was always aware of the bizarre circumstances of the Deputy Badge, and is completely unaffected by what Ginjo told him. Ginjo uses his own bankai.

Ginjo reveals alongside Ichigo’s stolen power, he also has Hollow powers mixed in as well in chapter 476, ‘THE LOST’.
As Ichigo and Ginjo clash, the other Soul Reapers decide to return to the Soul Society. After all, they have accomplished their objective.

Ichigo and Ginjo’s fight comes to an end in chapter 477, ‘THE LOST 2’. Ginjo wonders if their circumstances would have been switched if Ichigo was the first Deputy Soul Reaper.
Tsukishima tries a last ditch attack, but is stopped by Riruka. As Tsukishima cries out for Ginjo not to die, Riruka tells him that Ichigo was able to save him.

Shishigawara appears before the heavily injured and grieving Tsukishima in chapter 478, ‘THE LOST 3’.
Jackie and Yukio catch up with each other after the battle, and Yukio swears to triple the size of the company and employ the remaining Fullbringers in three years time.
Riruka is taken to Kisuke’s place to heal up, and she wakes to discover Orihime right alongside her. All traces of Tsukishima have left Orihime’s memory.
Shishigawara tries to help Tsukishima, but well…

Riruka pulls a disappearing act in chapter 279, ‘Goodbye to Our Xcution’.
Meanwhile, Ichigo goes to the Soul Society. There, he discovers that Kensei has become a captain again, as too has Shinji.
The reason for Ichigo’s visit to the Soul Society is so he can take Ginjo’s body back to the world of the living and bury it there. The Captain General complies with the request.
The volume, and thus the arc, ends with Riruka silently thanking the people who helped her before disappearing of somewhere.

That wraps up volume 54, and I quite enjoyed the climactic battles it featured. Byakuya’s fight against Tsukishima is pretty notable, especially with Byakuya having to resort to tactics that he’s never really considered before.
But the highlight of this volume has to be Ichigo’s fight against Ginjo. We’ve spent this arc watching Ichigo regain powers, only to have them torn away. Following that, Ginjo tries to get into his mind, but Ichigo has none of that and demonstrates his power. Ichigo may have fallen into the pits of despair not that long ago, but his resolve is unshakeable with his full power.

As for the Lost Agent arc as a whole – well, I quite enjoyed the more character focused we got at the beginning. We also had hints about Ichigo’s dad dropped on us – that’s something that will be further explored in the next arc.
The psychological stuff that goes on with Tsukishima’s power is also a pretty great highlight of this arc – Ichigo remains the only one unaffected, yet everyone else is convinced that Tsukishima is actually an ally. Ichigo’s reaction to discovering that might be the only time he has ever openly considered killing another human.
…and then it devolves straight back into battle after battle. I’ll admit that it does give us some interesting fights – Rukia vs. Riruka, Byakuya vs. Tsukishima and Toshiro vs. Yukio being the best examples of the Fullbringers putting their abilities to use.

The Lost Agent arc was the last one to be adapted into anime form, which perhaps wasn’t the best idea. It serves as a new beginning for Bleach, rather than an end. There is now only one last arc left for me to discuss from Bleach, and that is the Thousand-Year Blood War arc.
I’m pretty eager to share my thoughts on that considering as it is all manga only material. Before that, though, I think I’ll take another break from Bleach for a while and look at a few volumes of something else.

I enjoy writing, manga, anime and video games, so naturally here on my blog, you will find anime reviews, Nintendo news and other such things that I deem interesting.
View all posts by Rory →
This entry was posted in Manga and tagged Action, Adventure, Bleach, Manga, supernatural, Tite Kubo, Volume 54. Bookmark the permalink.