So with this episode, we are all caught with Symphogear AXZ. Well, for the time being at least. We witnessed the power of unison previously, but it seems that one of the Symphogear wielders struggles with the concept.

Chris is grateful for Elfnein’s help

We begin the episode with the reveal that using the annihilation barrier comes with recoil. As such, Chris and Maria’s Symphogears have to undergo maintenance. Still, Chris is grateful for Elfnein’s work, and happy she got some of that weight off of her shoulders.

Tsubasa and Shirabe train to strengthen their unison

The unison training continues for the other Symphogear users, though Shirabe seems to be struggling a bit. Tsubasa and Shirabe start by fight Alca-Noise in a simulation, but then they have to fight against Ogawa. Ogawa gets to show off his ninja skills, and adeptly evades their attacks. 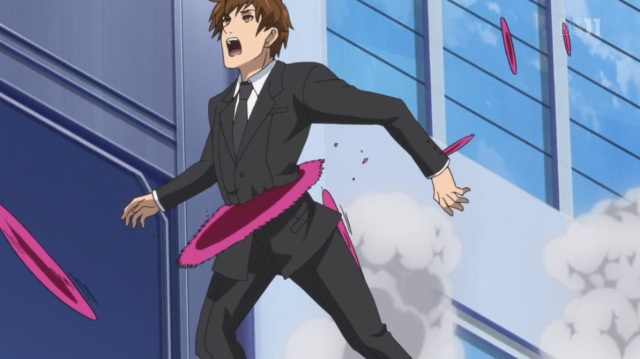 It seems that Shirabe took things too far

Ogawa is a ninja, so of course he reacts appropriately to Shirabe’s attack. With Shirabe struggling to master unison, Genjuro decides to give the Symphogear users a change of pace. He sends them to Tsuki Shrine.

Kirika is quick to notice the shrine’s rabbit statues

The priest of Tsuki Shrine

The shrine’s priest tries to break the ice with a joke, but Chris calls him out on it pretty quickly. They get down to business pretty quick after that – it seems that the priest has some information that will help the girls figure out the Bavarian Illuminati’s plan. 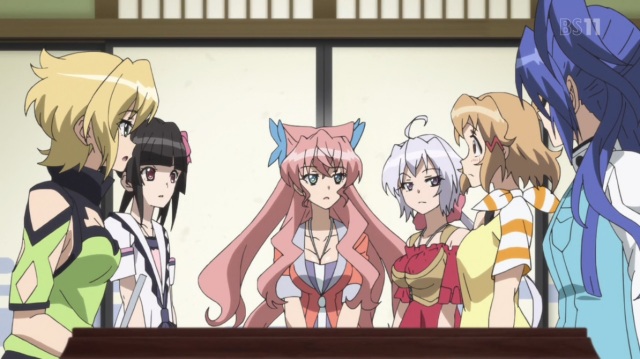 The reactions to Hibiki’s stomach are great

During the night, Shirabe goes out for a stroll whilst Tsubasa reports about the alchemists’ potential plans. 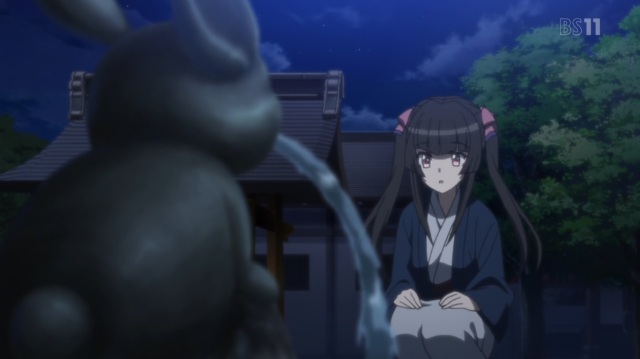 The priest talks with Shirabe, and convinces her to get her troubles out into the air. Shirabe claims to not really get along with people – of course Kirika is the exception. Shirabe is scared of pushing everyone away from her, and has built figurative walls as a result. The priest says that walls aren’t only used for rejection.

Prelati tries to attack Adam, but she is forced to flee. Adam decides not to go after her and leave her to the Symphogear users instead. Of course, it’s not long before she has drawn attention to herself. 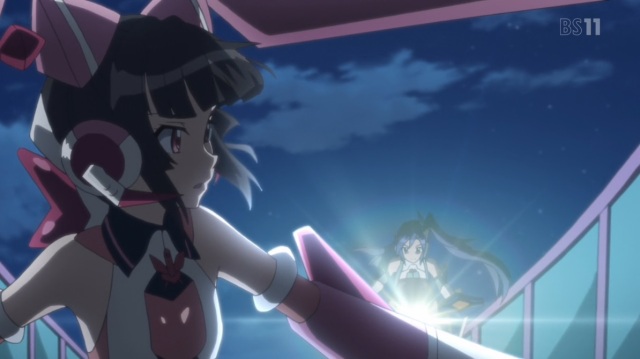 Shirabe and Tsubasa go on ahead

Shirabe heads out on her own to confront Prelati, since her Symphogear, Shul Shagana, lets her move faster than the others. Well, except maybe Tsubasa, who catches up to Shirabe on her bike.
Tsubasa tells Shirabe that they need to use unison, but Shirabe can’t do it. However, after some words of encouragement from Tsubasa – which includes how she was after losing Kanade – Shirabe comes to realise the walls she has built are for protecting people. With that realisation, cue the duet. 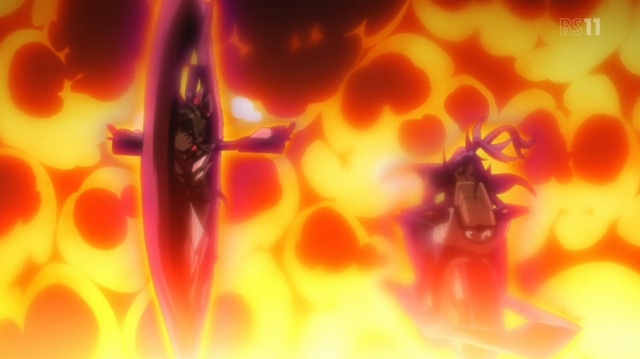 Prelati only views the Symphogear users as enemies – even though she knows Adam wants to kill her. Things might have turned out differently if she had stopped to think for a moment, but we do get a great high speed fight accompanied by Tsubasa and Shirabe’s duet, ‘Fūgetsu no Shissō’, or ‘Swift Union of Cool Breeze and Bright Moon’.

Or if you want to go along with the subs, ‘Racing Duet of Wind and Moon’

The battle concludes, and Saint-Germain learns the results via telephone call from Tiki. Needless to say, Saint-Germain is not happy with the way things are turning out.
There’s a post-credits scene as well, so make sure to stay tuned for that.

Sure feels good getting to see two new Symphogear AXZ episodes in one week. Genjuro got to show off his strength in the previous episode during training, and this time it was Ogawa’s turn. They may only be helping with training, but it’s great seeing them put their skills to use.

But this episode was Shirabe’s time to shine – with a little help from Tsubasa – and I enjoyed it. She’d always partnered with Kirika before now, so I liked the way we saw her struggle to leave her comfort zone. Also, whilst it was acknowledged she should try to open up to others, it was made clear that the walls she has built serve more than one purpose, and they aren’t necessarily bad. That seems like a pretty good way to approach it.

Once again, the unlikely duet between Symphogear users proves to be just great. I love the music in Symphogear, so I’ll probably say the same about the Hibiki and Kirika duet we’re probably going to get.
But yeah, ‘Fūgetsu no Shissō‘, or ‘Swift Union of Cool Breeze and Bright Moon’ or whatever you want to call it, was amazing.

Adam becomes more and more detestable with each passing episode. Maybe Saint-Germain will realise that siding with the Symphogear users is a better alternative to even associating with him. Though whether she will side with them after the events of this and the prior episode remains to be seen…