Character songs from Symphogear GX and AXZ are available on Spotify – they sure have been helpful with easing the wait. Unfortunately, you’d have to look elsewhere for songs from the first two seasons…
But, let’s focus on the current one, and its eighth episode. The alchemists have proven to be formidable foes, but this episode shows S.O.N.G. acquiring something that may help them out with that. Some training from Genjuro helps as well. 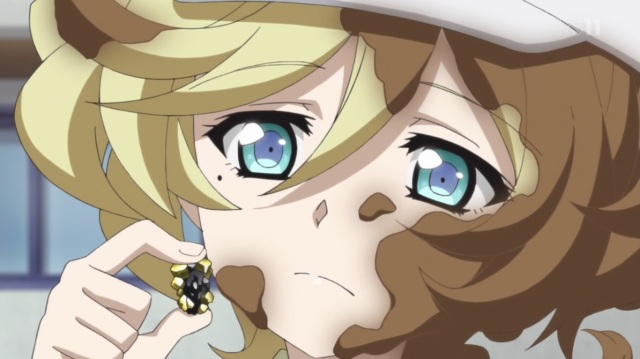 Digging up the Fool’s Stone is messy work

The girls are able to locate the Fool’s Stone, and Elfnein immediately gets to work after taking a quick shower.
Chris is told that Stefan and Sonya want to meet with her before they return to Val Verde, but she claims to be busy. Tsubasa insists that she should go and see them, but that conversation is soon cut short by Genjuro. 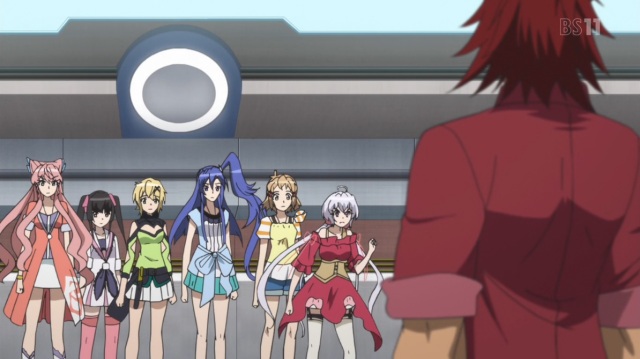 With everyone gathered, Genjuro suggests that it is time for some training

After that, we see Cagliostro watching over Prelati as she recovers from her previous battle with Shirabe and Kirika. Turns out that Cagliostro overheard Saint-Germain’s conversation with Adam earlier about sacrificing one of then. 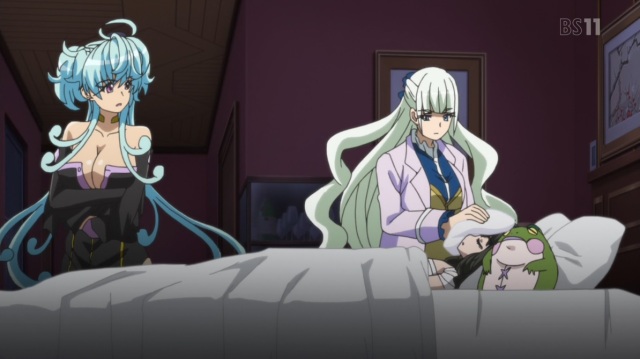 Cagliostro refuses to rest until the Symphogear users have been defeated

Back to the Symphogear users, and their training begins with a simulation of an Alca-Noise attack. However, it soon turns into a battle for Genjuro. Let’s just enjoy some highlights with a slideshow:

There’s a very good reason why Genjuro is the commander of S.O.N.G., as he so aptly demonstrates here. There is a point to the training though – I’ll touch upon that a little later on. Also, it turns out that initial session was just a warm-up. 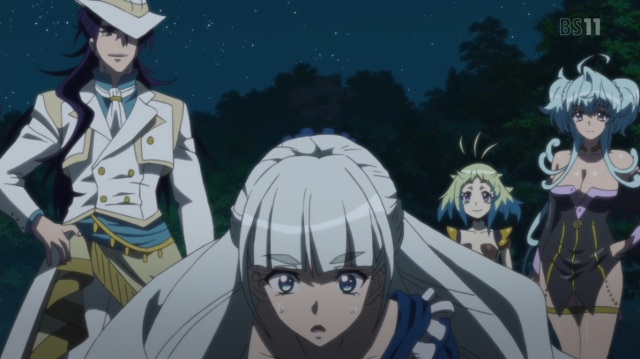 The alchemists begin the ritual of creation

Adam does something to Saint-Germain that carves some kind of symbol into her back, and says that they will begin the ritual of creation. Cagliostro volunteers to go and destroy the Symphogear users. She happens to have a plan in mind for taking care of them. 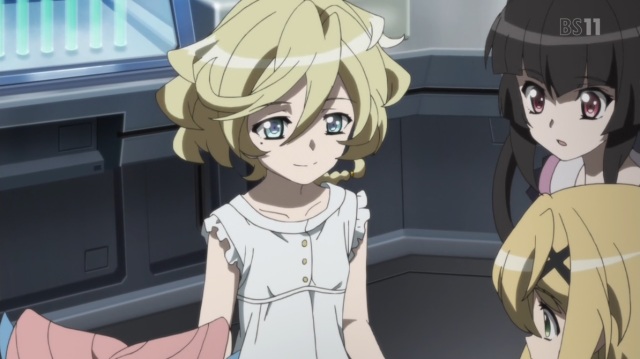 Elfnein returns everyone’s relics after equipping them with annihilation barriers

Tsubasa and Chris have already received their upgraded relics, as they had some business to tend to. Said business is meeting with Stefan and Sonya before they leave Japan to return to Val Verde. 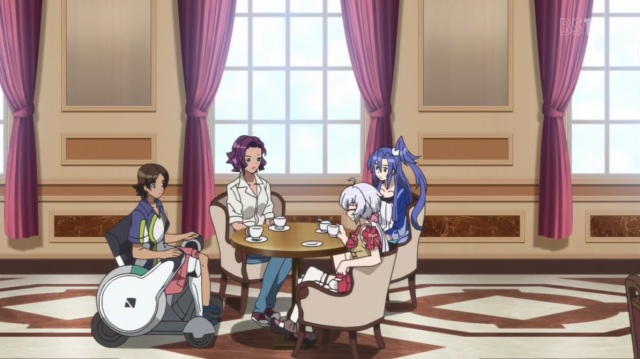 Tsubasa and Chris have tea with Stefan and Sonya

Stefan tells Chris about how Sonya is continuing the work of the Yukines – that is, Chris’ parents. We see a flashback which shows how they met their tragic end. Despite how Chris felt at the time, she knew that it wasn’t Sonya’s fault they died.
Before Chris can say anything, there’s an explosion and Alca-Noise appear. That’s Tsubasa and Chris’s cue to start fighting, whilst the civilians evacuate. 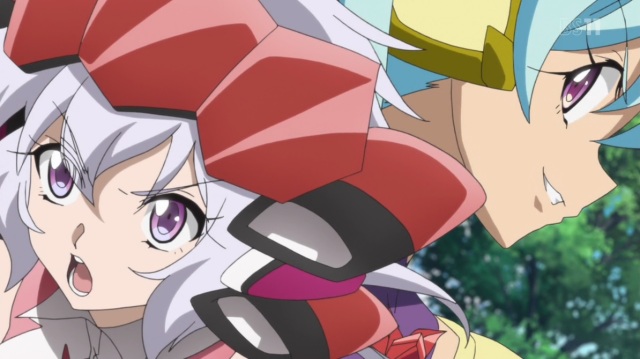 Cagliostro tries to attack Chris from behind

As you may have expected, Cagliostro is the one leading the attack. She almost gets one over on Chris, but the arrival of reinforcements puts a halt to that.
This is where Cagliostro puts her plan into action – she is able to split the girls up. Leaving Shirabe and Kirika together is a dangerous prospect, so she separates them. As such the girls end up paired off like so: Maria & Chris, Shirabe & Tsubasa and Hibiki & Kirika. It is Maria and Chris who fight Cagliostro. 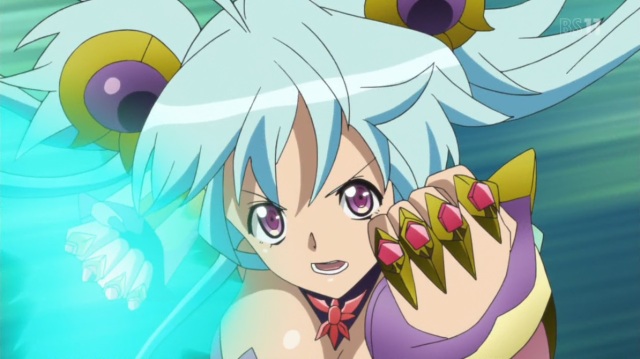 Cagliostro proves to be a formidable adversary

When Cagliostro threatens Stefan, he stands up and kicks some debris at her. Cagliostro retreats after Chris seizes the opportunity to attack. Meanwhile, Stefan tells both Sonya and Chris to put the past behind them,
After those words of encouragement, Chris gets back into the fight. She and Maria decide to make use of their training from earlier. 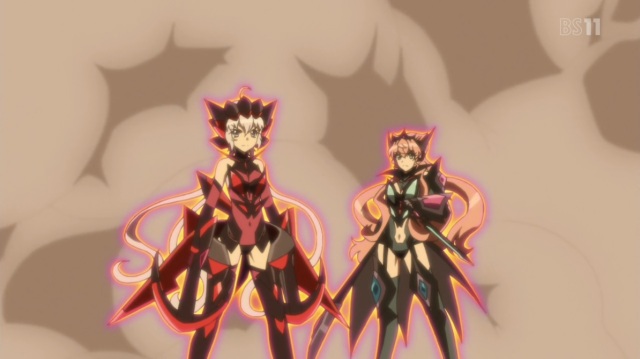 So that training that Genjuro put the girls through earlier? It was to build the bonds of unison between all six Symphogear users. Genjuro had foreseen the enemy splitting up Shirabe and Kirika, so the training was to prepare for that. I guess it’s time for another training slideshow:

We get a duet from Chris and Maria as they fight, and during the small training montage as well. Their song is called ‘Change the Future’, which is probably appropriate considering the technique they use. 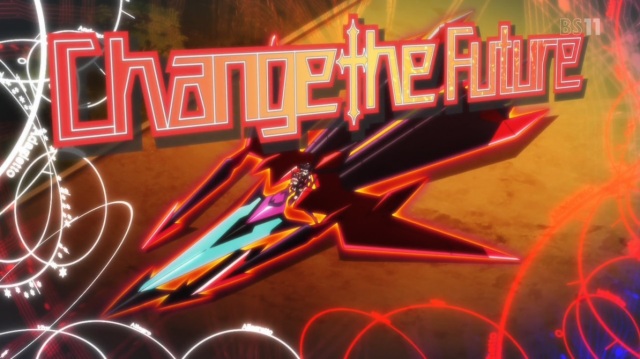 The battle comes to end, and the Symphogear users see of Stefan and Sonya afterwards.
Meanwhile, we see more strife occurring on the alchemists’ side – with Cagliostro gone, Adam says they should sacrifice Prelati.
Saint-Germain isn’t exactly best pleased with that suggestion…

Symphogear consistently delivers amazing episodes, and this one is certainly no exception. Seeing Genjuro in action once again was amazing – it’s not something we’ve really seen from him since the first season. I am kind of gutted we didn’t get to hear him sing during the training like in Symphogear G‘s 9th episode. However, Genjuro being able to take out all six Symphogear users with his bare hands… I guess that makes up for it quite a bit.
We also Chris finally come to terms with her past, and just in time to deliver an incredible battle fighting alongside Maria.
That Chris and Maria duet was amazing, and I feel the same about their fight against Cagliostro. Genjuro’s training really paid off, huh?
It also opens up the prospects of further duets. It’ll be interesting to see how the different genres of music of each Symphogear user will be combined.