Princess Principal‘s ninth episode is the eleventh case, and the focus is on Chise this time around. The episode is set fairly soon after Chise’s arrival in London, so we get to see how she adjusted to life in England. 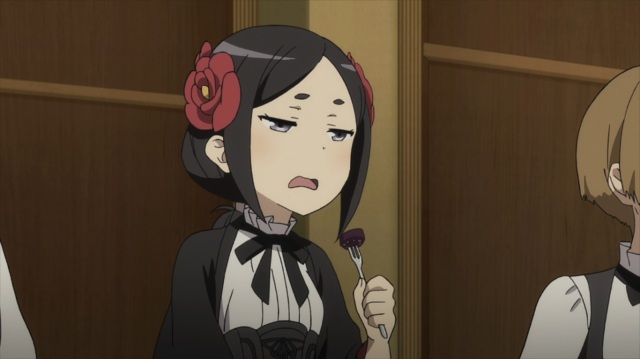 Chise is not a fan of the food

This episode is narrated by Chise, who is writing a letter to her older sister in Japan. Due to that, Chise gives us an idea of what a typical school day is, along with her activities as a spy. She doesn’t like the food, and her English is lacking.

She does excel at physical education, even if she does have a rather unusual approach to playing cricket. It works quite well – though I imagine her skill with a sword helps quite a bit.

Beatrice isn’t a fan of Chise’s drawing of her

Chise tries to demonstrate some uniquely Japanese culture in both music and art classes. She’s not exactly met with glowing praise.
During lunch break, Chise spots a couple of girls dressed up in fencing gear. She takes quite an interest, and decides to challenge one of them to a duel. She misunderstands how to challenge someone to a duel, but Chise and the fencer girl end up clashing blades anyway.

Chise’s duel draws quite a crowd

A teacher tries to break them up, and probably earns himself quite a headache courtesy of Chise.
Chise meets with the other Team White Pigeon members, and we get to hear her thoughts on each of them. I don’t care what anyone says, I find it perfectly believable that 20 year old Dorothy could get away with pretending to be a 17 year old secondary school student. Chise doesn’t, though.
Dorothy gives the signal that shows she needs to tell them about their next mission, and they retreat to the lavatory.

Lily has some less than kind words to indirectly say about Ange. Chise tells her to just straight up say she doesn’t like Ange, to which Lily responds that Princess should choose her friends better. Princess’ retort to that flusters Lily, and she leaves.

Chise wants to be useful

When they do go on their missions, Chise finds herself doing very little. As a member of the team, she just wants to prove herself useful.

Chise tries to admire a butterfly emerging from a cocoon

Later on, Chise spots a butterfly emerging from a cocoon and stops to admire it. However, a group of guys come along, and order her to get out the way. One of them kicks the butterfly, which angers Chise. She challenges him to a duel, but Ange and the others arrive and tell her to stop drawing so much attention to herself. 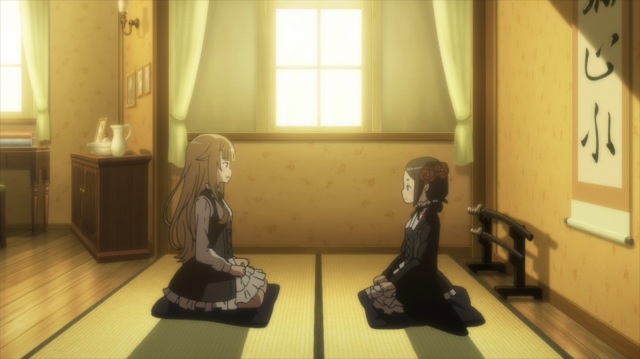 To Chise’s surprise, Princess drops in on her. Turns out Princess is there to teach Chise how to duel.

Princess acts as Chise’s second for the duel

Everything is set up for the duel, with Lily being the witness. The rules are simple; both duellists are handed a gun each. The guns only have three shots, and the duellists take turn to fire at each other. Whoever is injured first loses, and if all the shots miss, the two duellists will let bygones be bygones.
Chise’s gun misfires, supposedly because it is old. Her opponent shoots at her, but she doesn’t even flinch. Since she can’t rely on her gun, Chise comes up with a different idea.

Chise uses her ribbon as a makeshift sling

With a little inventiveness – and a very good arm – Chise is able to claim victory in the duel. She gets an apology from her opponent.

Chise can’t help but laugh at the celebration ceremony the others put on for her. She can see that Japan is still unknown to them.
Dorothy also reveals that they were taking care of their own mission whilst Chise was duelling – Lily’s absence allowed them to sneak into her room and tamper with her phone. Only a little bit, though.

Throughout the episode, Chise made several reports to Lord Horikawa. Her goal is to determine whether Japan should side with the Commonwealth or the Kingdom – Operation: Changeling is a deciding a factor in that. She doesn’t know whether the operation will be successful, but she wants them to be victorious.

I really enjoyed this episode. Seeing and hearing events from Chise’s point of view was fun, especially with her being a foreigner in an unfamiliar land. As far as Princess Principal goes, it was a pretty light-hearted episode – in fact, it might have been just the thing I needed after watching this week’s A Centaur’s Life…

Princess Principal is still retaining its episodic nature, and we seeing the cases out of order. That’s not something I have a particular problem with, though I can’t help but wonder if the structure will change as we enter the last weeks of the season.

Some of Princess Principal‘s episodes stand out moreso than others, but I don’t feel that is ever had any bad episodes. I would easily consider amongst the best anime of the summer season.

I enjoy writing, manga, anime and video games, so naturally here on my blog, you will find anime reviews, Nintendo news and other such things that I deem interesting.
View all posts by Rory →
This entry was posted in Episodic and tagged Action, Ange, Beatrice, Chise, Dorothy, Episode 9, Princess, Princess Principal, Spy, Summer 2017 Anime. Bookmark the permalink.