Today, gamescom opened its doors in Cologne, Germany. Nintendo are present at the games fair, and they’ve already made a few announcements. You can find them on Nintendo’s various social media sites, but I’ll be sharing them here along with my thoughts on them.
The news I’m most interested in is new stuff for Fire Emblem Warriors. Since there were several announcements from gamescom, I decided I would just lump them all together in this post.


First up, some update news for Splatoon 2. A new stage, Manta Maria, will be added on Saturday 26th August. The Manta Maria is a ship, and it seems that its masts will play key roles in battles.
There will also be a new special weapon, the Bubble Blower. The Bubble Blower allows you to fire up to 3 big bubbles, which will explode when doused in your team’s ink. When they explode, the area around them is doused in ink. The bubbles can also be used defensively, though if an opponent shoots them enough they will disappear.
The Bubble Blower will be available as part of the Forge Splattershot Pro weapon set, which will be released on Saturday 2nd September.
Finally, the Salmon Run mode is getting a new stage called Lost Outpost. It’s an area that was abandoned due to rising sea levels, and there are plenty of walls that obscure your vision. You’ll be able to play on Lost Outpost in local multiplayer after applying the update data that will be released on Wednesday 23rd August. It will also appear in online Salmon Run events as well.

I really like the look of Manta Maria, and I suspect that there’ll be some fierce battles around the masts at teams of Inklings strive to cover everything in their own colours. The Bubble Blower special weapon looks interesting as well, though I wasn’t a fan of the Forge Splattershot Pro when I tried it out in the first game. Still, I give every new weapon a test run when they are released, so maybe it could convince me. It’s going to take some doing to persuade me to part with my Splat Brella, though.
Glad to see that we’re getting a bit more variety in Salmon Run as well. Things get pretty intense in that mode, it’ll be interesting to see how the walls in Lost Outpost affect that.

Next, a new character will be added to ARMS. Her name is Lola Pop, and you can see her introduction in the video above. The Nintendo UK YouTube channel will have a closer look at Lola Pop on Wednesday 23rd August at 10:00 BST.
Lola Pop also brings a new stage and three new ARMS along with her. She will be added in the next free update for the game.
Also, the ARMS Global Testpunch will return from Friday 25th August 16:00 BST to Sunday 27th August 21:00 BST. It’s free to download, allowing Nintendo Switch owners to experience ARMS without committing to buying it.

I welcome the addition of another female fighter in ARMS, but I’ll probably be sticking with Min Min as my main choice. The video above gives an idea of Lola Pop’s special ability, though we’ll have to wait a bit longer to actually see how to best use it during a battle. The new ARMS she has look to be fairly interesting too, though I tend to prefer the glove-type ARMS. They may be relatively basic, but they get the job done.

Next, new features have been revealed for the Nintendo Classic Mini: Super Nintendo Entertainment System which launches on September 29th.
There is a rewind feature, allowing you to go back when you make an error during a game. Action-oriented titles like Super Mario World let you go back 40 seconds, where RPGs such as Super Mario RPG: Legend of the Seven Stars allows you to go back a few minutes.
The video above shows a couple of other features as well. Will everyone who wants one be able to get their hands on a SNES Mini? I don’t know – I imagine the inclusion of Star Fox 2 is going to make demand for it rather high. 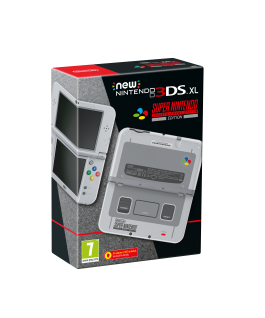 The New Nintendo 3DS XL – Super Nintendo Entertainment System Edition will also be released on October 13th. The outer shell pays tribute to the SNES’s classic design, whilst the buttons have the same colour scheme of the European SNES. I’d guess that this will only be available in Europe (and maybe Japan), as the American SNES’ buttons have an ugly purple colour scheme.
On the same day, three new titles will be added to the Nintendo Selects range: Super Mario 3D Land, Luigi’s Mansion 2 and Kirby: Triple Deluxe.

I’m content with my New Nintendo 3DS, so I don’t have much interest in buying this. It looks good, though. Also, if I stumble upon a competition to win one, I’ll most likely enter.

We now come to the news that I’m probably most excited about, and it’s the reveal of new characters for Fire Emblem Warriors, as well as a release date.

As shown in the trailer above, four more characters have been revealed for the game. They all come from Fire Emblem Fates, and are Hinoka, Takumi, Camilla and Leo.
Considering this is a game from Koei Tecmo and Team Ninja, it was pretty much a given that Camilla was going to be in it. Still, we get some variation in weapon types with those four – Hinoka uses lances, Takumi is an archer, Camilla wields an axe (she is able to use magic as well in her default class in Fates) and Leo is a magic user. 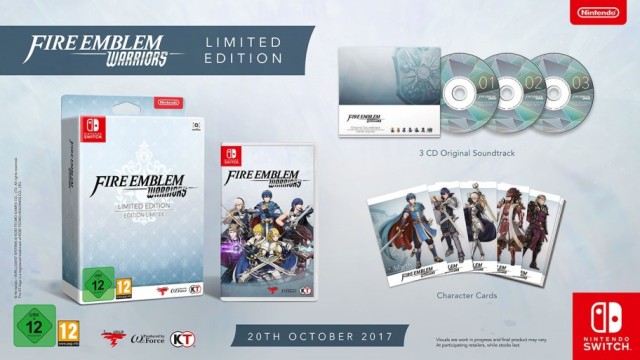 Fire Emblem Warriors will be released for both the Nintendo Switch and New Nintendo 3DS consoles on October 20th, alongside the new Chrom and Tiki amiibo.
The Nintendo Switch version will also be available as a special Limited Edition as seen above, which includes a three-disc original soundtrack and character art cards.

I would love to get hold of that Limited Edition a lot. However, Fire Emblem Warriors is the third game I want to buy that is released in October, with both Super Mario Odyssey and Nights of Azure 2: Bride of the New Moon coming out the following week. I’ve already committed to the Nights of Azure 2 Limited Edition, so I guess I’ll just have to settle for the regular version of Fire Emblem Warriors… or maybe sacrifice some Comic Con spending money.

With gamescom going until Saturday 26th August, Nintendo might have a few more things to share during the event. I’ll post about anything that catches my attention here.

1 Response to Nintendo News from gamescom