Episode seven of A Centaur’s Life features a trip to a swimming pool, followed by a round of scary stories. Can you tell that I wasn’t feeling particularly creative with that title?

The three Chis have a rather amusing reaction upon meeting Suu

Hime and her friends meet up with Manami and her younger sisters, as they are all heading to the pool. Before that, though, the three Chis call Suu a dinosaur, and then struggle with pronouncing her name.
They soon get used to her and start climbing all over her.

Everyone ready for the pool

The girls get changed to get into the swimming pool. During this, we learn that Antarcticans do not nurse any young. Shino is also able to get changed by herself – the three Chis triumphantly show that they can as well, but they don’t have to go to as much effort as a centaur.

Suu was reluctant to get into the water

Suu was scared of entering the water, due to the time she spent living in Antarctica. Falling into water there would almost certainly be a death sentence. Fortunately, she’s not in Antarctica any more and the three Chis are able to encourage her into the pool.

Shino thinks that Sue is cute

Sue ends up slipping, but fortunately Shino is there to pick her up. She also finds her to be incredibly cute.

Hime and the others go back to the other pool. Shino plays around with the three Chis for a while. Afterwards, they go to grab a warm drink. After playing so much, the younger girls are exhausted.

The Chis find themselves with more than one older sister

The second half of the episode has the Occult Science club gather at school at night to tell scary stories. The reason for that is that one of the club members wants to get closer to the club president, and apparently that involves dragging Hime and her friends along as well.

Hime has a predictable reaction to the scary stories

The conversation turns to how sufficiently advanced technology is said to be indistinguishable from magic. That’s followed by Antarcticans’ beliefs, and a superstition that Suu once held. 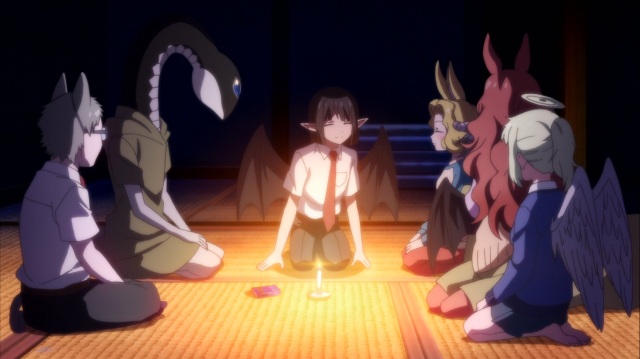 The subject returns to scary stories

The guy who came up with the idea of telling scary stories tries to get things back on track. The story he tells isn’t so great, though he does manage to get reactions from Hime and Suu.

Towako says that she’s going to the restroom, and asks if anyone wants to accompany her. She then has to deny being scared, and the episode just abruptly ends there.

This was an episode of two halves. The first half was some enjoyable fun at a swimming pool, with a cuteness factor provided by Shino, the three Chis and Sue. I did feel that it might have lingered a little too long on Shino getting changed, but everything else was pretty good.
Manami may have had some harsh words for her dad last time, but at least she’s a reliable older sister. I still think she has some work to do before she can entirely redeem herself, though.
Learning more about Suu’s fears and family was pretty nice, as well. She is one of the more interesting characters after all.

I didn’t really find the second half of this episode very engaging. For a start, the guy who wanted to get closer to Towako – was his name ever stated? Maybe it was, but I certainly can’t bring myself to care about him either way. His behaviour around the girls did him no favours, either. That ‘Mystery Spot’ guy was more interesting, and he was just sitting there silently reading a book. He was somewhat reminiscent of the brother from Non Non Biyori.
Like I mentioned above, we already know how Hime was going to react to the scary stories, and I don’t really see why they had to go through with that a second time.
That whole segment also seems to end abruptly as well – I don’t know why they bothered going to the effort of animating the male club member stand up if they’re just going to cut to the credits right away.
The only positive things that I feel came from the second half of this episode were Nozomi defending Hime and learning a little more about Suu and the Antarcticans in general.

A Centaur’s Life continues to be a succession of hits and misses, with this episode having one of each. I really enjoyed the stuff at the swimming pool, but I caught myself yawning during the whole scary story sequence.
There’s some great potential within A Centaur’s Life, but it has moments where it just doesn’t live up to that. I know that it can be better than the second half of this episode, and that just makes it frustrating when it is not.

I enjoy writing, manga, anime and video games, so naturally here on my blog, you will find anime reviews, Nintendo news and other such things that I deem interesting.
View all posts by Rory →
This entry was posted in Episodic and tagged A Centaur's Life, Comedy, Episode 7, Episodic, Himeno Kimihara, Kyoko Naraku, Nozomi Gokuraku, Sassassul Quetzalcoatl, slice-of-life, Summer 2017 Anime, supernatural. Bookmark the permalink.

1 Response to A Centaur’s Life Episode 7: Swimming and Scary Stories