Having passed the halfway point of the current season of anime, I’ll now be sharing my thoughts on what I have been watching.
If you go back and compare my Summer 2017: First Impressions Part 2 post to this one, you’ll notice that CHRONOS RULER is missing. That’s because I watched a couple of episodes and then forgot it existed. I could try to get back into, but considering the lack of impact it had, I won’t bother.
Everything else is there, though.A Centaur’s Life

A Centaur’s Life has been fairly hit and miss so far. At its best, this show is an enjoyable slice of life series, but then it can tend to be a bit on the lame side on occasion as well. There are some interesting themes running through that may not be immediately obvious, but keeping an eye on the background reveals those.
Perhaps things will get better for the second half. 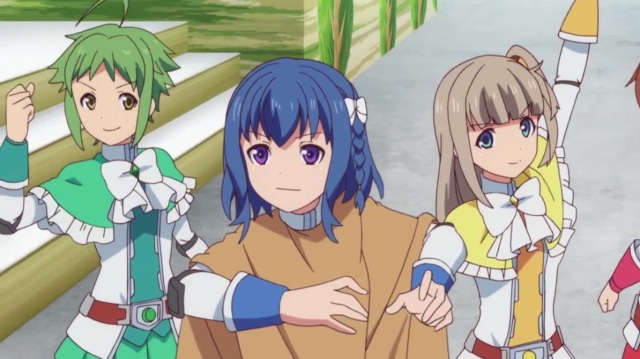 Yuki Aoyama is the newest addition to the Cheer Fruits team

Action Heroine Cheer Fruits has been a really great surprise this season. I was looking forward to it before the season began, but it has managed to a whole lot more entertaining than I thought it would be. I still maintain that there is a Love Live! feel to it, even if only just a little.
I believe we’ll have all the cast together properly after the next episodes, so I’m looking forward to seeing where it goes after that. 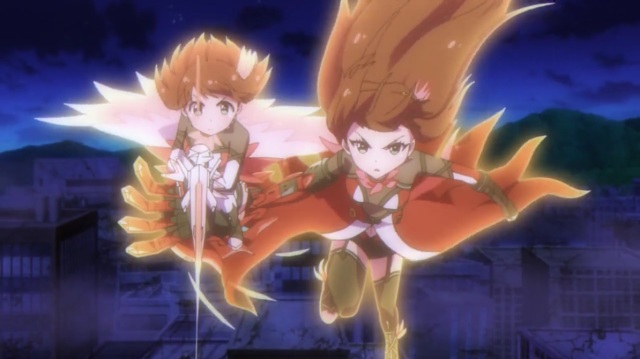 Miki and Misaki ready to attack

A problem I have with Battle Girl High School, as well as any other similar smartphone game adaptations, is that the producers feel the need to cram as many characters in as possible. There are subtitles that appear to remind you who is who for each episode, but they are in Japanese and the subbers don’t seem to really care for translating them.
Ideally things like this should focus on groups of five or six at the most – sure, someone’s favourite character might only end up with a minor role, but it will be easier to keep track of everyone.
Though saying that, there are a few characters who stand out – Misaki for example, though from what I can tell she doesn’t appear in the game.
Battle Girl High School is pretty much just another smartphone adaptation, with nothing particularly unique going for it. I am enjoying, but not quite as much as almost everything else mentioned here.

The last few episodes have effectively been slice of life stuff concerning Boruto and his fellow Ninja Academy students. Those episodes were all right, but I wouldn’t exactly say that they stood out.
At the time of writing, a new arc has started. Sarada suspects that Sakura may not actually be her mother, so she has decided to set out in search of her father, Sasuke. Doesn’t look like we’ll have to wait long before we get some more action, either, so I’m guessing things are going to get at least a little bit better.

Gohan and his mentor, Piccolo

The Universal Survival arc of Dragon Ball Super might just be my favourite arc of the show so far. A big part of that is the introduction of Caulifla and Kale, but it has also been nice seeing characters other than Goku and Vegeta get to actually do something. Androids 17 and 18 have been particularly amusing during the Tournament of Power, and the most recent episodes have featured a magical girl parody. That was pretty much Toei making fun of itself, and I enjoyed that a lot.

One thing I’ve come to realise about the Fate franchise is that the Servants summoned tend to be way too good for their masters. I suppose there are some exceptions, though…
Anyway, the most recent episode ended just before the Red and Black Factions were about to clash so I’m certainly looking forward to seeing that battle unfolding.
Also, Berserker of Black might just be my favourite Berserker class Servant of the franchise – she is adorable.

Apparently the general consensus is that the original Luck & Logic isn’t very good. I haven’t seen the original, but Hina Logic has been something that I have found particularly enjoyable. I suspect that is because the focus is on cute girls doing cute things, with some magical girl elements sprinkled in for good measure. Sure, it may not have mainstream appeal, but what it does have is good enough for me. 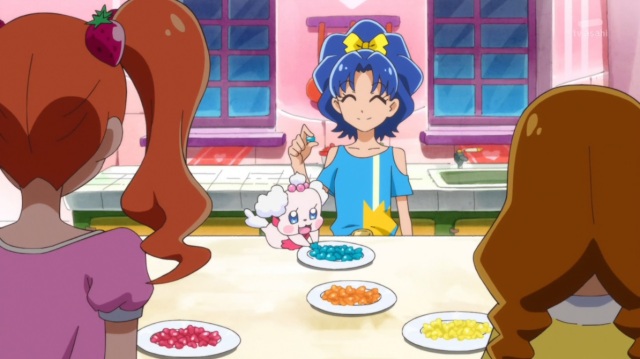 The most recent episode focused on Aoi

We’re getting some character-focused episodes at the moment, which will almost certainly lead to the Cures’ next power-up. This is good, because I feel that those episodes are where this particular series shines brightest.
I do feel that it did peak with episode 25, which was an incredible AkiYuka episode with a plot that felt lifted straight out of a yuri manga. I got into PreCure for the yuri subtext, and this season has delivered that.

The beginning of this show was all right, but I feel like I’m more into it now that Riko and Reg are actually descending into the Abyss. The designs of all the different creatures that make their homes in the depths are great.
I’ve seen some high praise for Made in Abyss, but I personally don’t feel it quite lives up to that. All I can really say is that I have found it decently enjoyable.

Sirius and the best female character from My Hero Academia, Froppy

We recently saw a major fight which was a catalyst for more villains to start making a move – and also saw a few characters experience personal growth because of it. The most recent episode at the time of writing this was anime original, with a focus on my favourite female character from the show, Froppy – yet another character I liked voiced by Aoi Yuuki.
I feel that the second season of My Hero Academia has been quite an improvement over the first.

Hotaru and Yuma try to get intimate

Let me begin by saying that Fujiwara should take a long walk off a short pier. Considering how he is pretty much being played up as an antagonist, I suspect that’s the reaction the show wants. I did feel a bit of sympathy for Takeda at first, but like I’ve seen discussed elsewhere, this show has gone particularly overboard with his sadness that I really don’t care any more.
Besides, the main draw here is Yuma and Hotaru. They may be terrible people, but I do want to see them end up together properly. Whether that will actually happen or not… 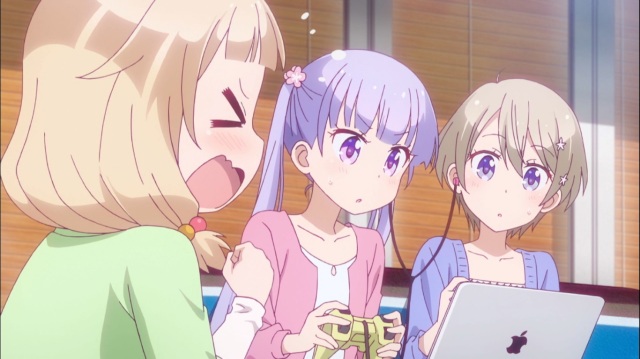 I adore the first season of NEW GAME!, but this second season might be even better. There’s more drama here, and as a result I feel more invested in the development of PECO than I did with Fairies Story 3. Aoba may have achieved one of her dreams, but it has not been plain sailing for her.
The other characters have been getting some love as well, with Hifumi being the best example as she tries to overcome her shyness.
The yuri is stronger than ever, too – the show has actually acknowledged that there is something going on between Ko and Rin, and then the Nene x Umiko ship has become even more evident.
NEW GAME!! has been great so far, and I imagine that will remain the case for the second half.

Luffy destroys one of Cracker’s many biscuit soldiers

The Straw Hats are still on Whole Cake Island, and probably not going anywhere any time soon. One Piece is going at a snail’s pace once more, but at least we’ve got some action with the Luffy vs. Cracker fight. I know how the fight unfolds from having read the manga, but I am looking forward to seeing it in animated form.
Meanwhile, we’ve been introduced to Sanji’s family, the Vinsmokes. They are not very nice, to say the least.
There are some great moments coming up in the current arc, but it might be a while before we actually get to them.

Princess Principal might just be the best original series of the season. The first six episodes have been establishing the main cast, and they’ve all delivered some pretty great stuff. The spy stuff has been enjoyable, and the series can deliver great action scenes when necessary as well.

Riri ready to sing and upload her video to the internet

It seems that a fair few people can’t help but compare Sakura Quest to Shirobako. The thing is, Sakura Quest is not Shirobako. This show should be judged based on its own merits, rather than what it is not.
It’s a great show, too. I’ve really enjoyed watching Yoshino and her ministers try to drum up more tourism for Manoyama, whilst tackling a few of their own personal problems too.
Riri is probably my favourite of the main group of five girls, and I would have to say that Sandal is my favourite of the male characters. 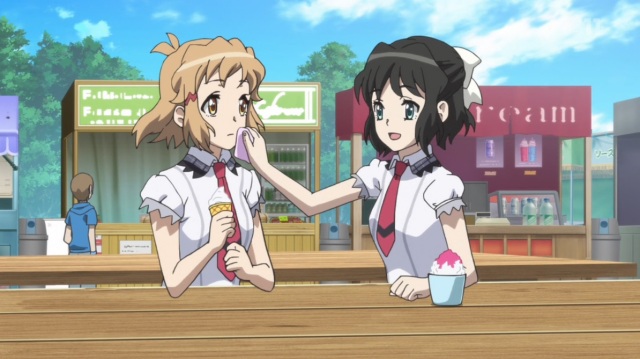 Hibiki and Miku are so good together

I was hoping that I would be able to catch up before posting this, but that unfortunately hasn’t been case. All we can really do is wait patiently for the subs. It seems we won’t have to wait much longer. Once the latest episodes have been subbed, I’ll be covering them as soon as possible, and then hopefully I’ll be able to return to the regularly scheduled Symphogear AXZ posts after that.
I have loved every minute of what I have seen, simply because it is Symphogear. It is just something that you’ll probably never see outside the medium of anime, and I love it to pieces. The songs are great, the fight scenes are brilliantly over the top and it has yuri as well.
The antagonists are fairly interesting, and the show has even managed to find a way to bring back a certain character. Hopefully they’ll prove beneficial to Elfnein’s research.

That list above only applies to shows that premiered in this season. My Hero Academia Season 2 has been brilliant, and Toei has really delivered with Dragon Ball Super and KiraKira ☆ PreCure a la Mode.
Actually, now I think about it, those shows listed above are all currently contenders for my inevitable Top 10 Anime of 2017 list I’ll be creating at the end of the year. I’ve found this season to be pretty great overall.