With each season of PreCure having around 50 episodes, I guess we are now officially past the halfway point of KiraKira ☆ PreCure a la Mode. Whilst the character introductions were pretty good, it has had less than stellar episodes too. However, the most recent episodes have proven to be most impressive.
This 26th episode features a trip to the ocean, and a reunion with a familiar face. Let’s see if KiraKira ☆ PreCure a la Mode can continue to impress me.

The KiraPati girls ready for some fun at the beach

KiraPati sets up shop at the beach, and the girls just generally have a good time. Ichika uses kira-kiraru to create a giant swim ring for the shop itself, having it float on the ocean. This soon proves to be a bad idea, particularly when everyone falls asleep and KiraPati begins drifting on the tide.

Ciel becomes too hungry to maintain her human form 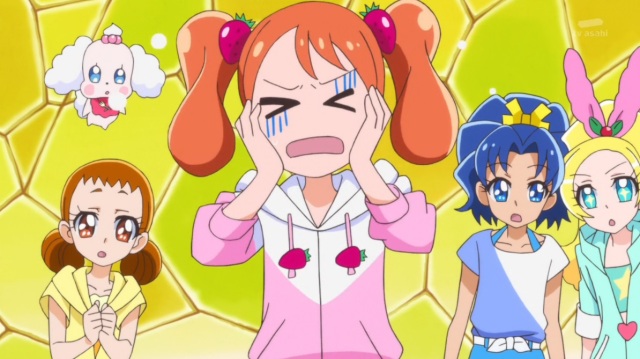 Ciel should be in fairy form here…

The girls end up stuck on a deserted island. Ichika suggests that Ciel transforms into Cure Parfait, but Ciel’s stomach has other ideas. Without any kira-kiraru or ingredients to generate kira-kiraru, the girls explore the island in search of ingredients.

You know what? KiraKira ☆ PreCure has some pretty great reaction faces

The girls end up mistaking a vine for a snake. They all react except for Yukari and Akira, and then you get Akira’s brilliant reaction to having almost everyone hide behind her. After that little incident, the girls stumble upon some footprints. Kirarin goes on ahead to see where the footprints lead, and she stumbles upon a familiar face. 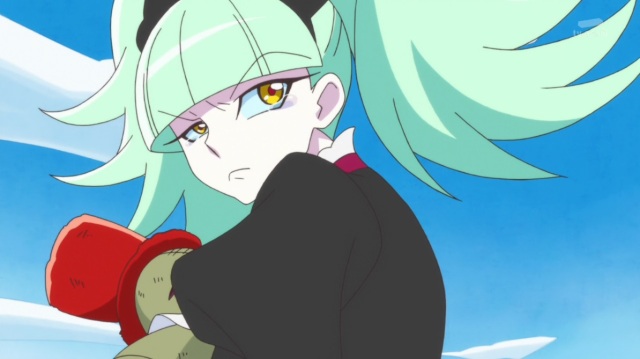 Bibury is stranded on the island as well

After being defeated last time, Bibury couldn’t face Noir. She headed out to the island, but when she went to return, her boat had floated away. Iru is without any power, so Bibury was alone. Bibury runs off after telling Kirarin all of that. 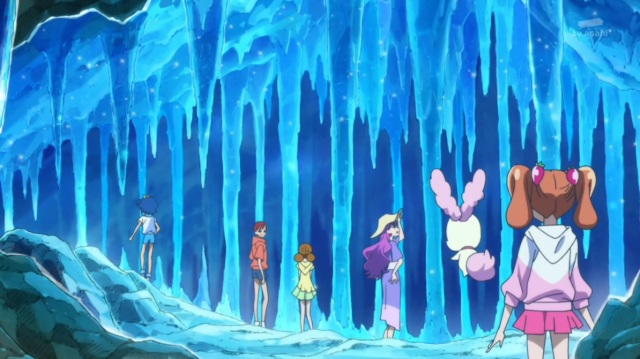 Ichika and the others discovered a cave full of icicles

Kirarin finds her way back to Ichika, who leads her to a cave full of icicles. Seeing the icicles gives Ichika an idea, and the girls get to work making shaved ice.

Ichika has a flash of inspiration and creates penguin shaved ice

After only a single spoonful of shaved ice, Kirarin returns to her human form. I don’t know, I find it odd that Ciel hadn’t heard of shaved ice before now.
Ciel lets the others know that the footprints they discovered earlier belonged to Bibury. After seeing that lonely look in her eyes, Ciel wants to make some shaved ice for Bibury. The others go along with it, because that’s what Ciel’s heart desires.

Ciel approaches Bibury with some penguin shaved ice, and offers it to her. When Ciel mentions how she and the others worked together to make it, that only upsets Bibury. She has Iru steal the kira-kiraru from the penguin shaved ice.

Iru will be playing the role of monster of the week

Iru ends up turning on Bibury, despite being told to attack Ciel. Luckily for Bibury, Ciel is a nice lass and she doesn’t want to see her come to any harm. 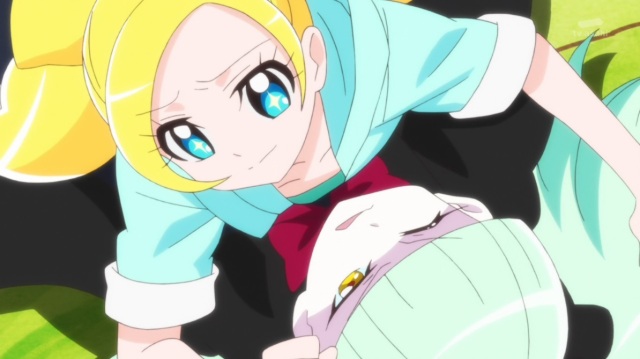 Of course, Bibury is less than pleased with that turn of events. Just then, the other Cures show up. Ciel transforms into Cure Parfait, and Bibury has to watch as she is protected by the Cures. She laments that everyone leaves her and she always ends up alone.
As the Cures continue to fight, Bibury ends up getting caught in an attack and falling from a cliff.

Parfait tells Bibury that she doesn’t have to be alone

Parfait wants to eat the shaved ice together with Bibury, even if they are enemies. Also, those things the Cures received a few episodes ago – Cure Parfait’s one turns into a pegasus after she saves Bibury.
After ensuring Bibury is safely back on the ground, Parfait returns to the battle and finishes Iru in the usual way. 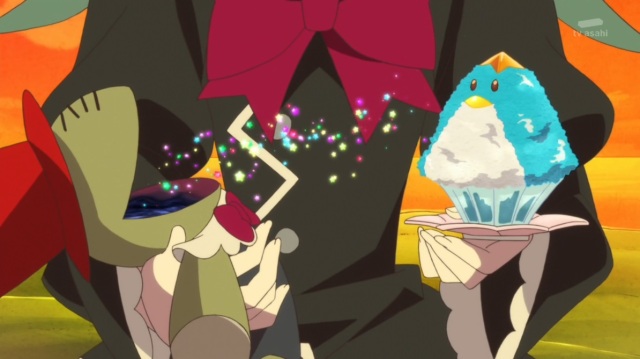 After Iru is defeated, Ciel offers Bibury the penguin shaved ice. She accepts it, but uses the kira-kiraru to transform Iru again and fly away from the island.

With the kira-kiraru generated from making the penguin shaved ice, the girls are able to convert KiraPati into a hot air balloon to escape from the island themselves. As they go, Ciel is a little depressed that she couldn’t get Bibury to try the shaved ice. However, there’s always next time.

That wraps up episode 26. Honestly, I don’t expect anything will be able to top episode 25 (except maybe another AkiYuka episode), but I did enjoy this episode a lot. Perhaps that was because Ciel was the main focus, or perhaps because it gave us the possibility of Ciel x Bibury being a thing.
It wouldn’t surprise me if Bibury switches sides later on in the series; after all, Julio did earlier on. Bibury received her powers in a similar manner to him, so it’s not like there isn’t any precedent for that.

Next time, looks like Aoi will be the main focus. We’ll be getting a battle of the bands, and you can certainly bet that I am looking forward to seeing that.