This month, I’ll be shining the spotlight on a game that I gave an honourable mention last time around. Part of the reason for that is because I really need to slow down when it comes to buying Switch games – in the few months that it has been out, I’ve already bought 11 games for it. Two were digital only (KAMIKO and Wonder Boy: The Dragon’s Trap in case you’re wondering), the rest are all physical. To put that in perspective, I was barely able to get 12 games in a single year for the Wii U.
Another part of the reason is that I have been unable to resist pre-ordering the Limited Edition version of Nights of Azure 2: Bride of the New Moon. Since that comes out in October, the idea is to put some money aside for that. Same goes for Super Mario Odyssey and the London MCM Comic Con. Urgh, October is going to be an expensive month for me… and I don’t think having my birthday right at the beginning will help to offset any of that. That Touhou Kobuto V: Burst Battle is also mighty tempting as well…
Huh, got kind of off topic there, huh? Well, let’s just turn our focus to the game that I have picked to feature this month. It is a sequel to a Wii U title, and it involves squids and a whole lot of ink.

Splatoon 2 brings the Inklings back once more, together with the familiar four vs. four turf wars. Whilst there are plenty of elements present that players of the first game will be familiar with, there’s also plenty of new stuff to sink your teeth into. 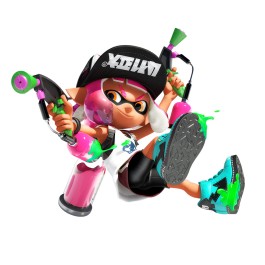 Mainstays such as the Splat Roller and Splat Charger return from the first game, but they are accompanied by a couple of new weapon types. One of those are the Splat Dualies. As you can see on that image to the left, the Inklings dual-wield Splat Dualies. If you hit the jump button whilst firing them, you’ll be able to do a dodge roll. Performing a dodge roll also lets you concentrate fire on a single spot, making it useful for splatting opponents.
The returning weapons have been changed up a little, though. New special weapons have been introduced in Splatoon 2, which remix the weapons featured in the original game.

Shown above are a small handful of the available weapons: Splattershot, Splat Charger, Slosher and Heavy Splatling. At the time of writing, I’m waiting for the addition of another weapon that is only currently available to use in single player. It’s a weapon that would help to keep you dry in the rain, at least whilst you’re not spraying ink everywhere with it. Funnily enough, it can protect you from enemies’ ink as well.

If co-op modes are more your thing, Splatoon 2 provides that with the new Salmon Run mode.

The enemies in Salmon Run are called Salmonids

In Salmon Run, teams of 2 to four Inklings battle waves of Salmonids in order to collect Power Eggs and Golden Eggs. The main goal is to collect enough Golden Eggs to fill a quota within a time limit. All Salmonids drop Power Eggs when you splat them, whereas Boss Salmonids drop Golden Eggs.
You have to survive three waves, and your pay grade goes up for each successful completion. Things start relatively easy, but it isn’t long before there are Boss Salmonids everywhere. You can overwhelmed pretty quickly in this mode if you’re careless.

You can change your Inkling’s hair this time around

Of course, multiplayer is a big part of the Splatoon 2 experience. It is possible to complete in local multiplayer Turf War battles. Up to 10 docked Nintendo Switch consoles – eight players and two spectators – can connect via wired LAN. This means you are able to host Private Battle tournaments without an internet connection.
My multiplayer battles have all been online thus far, and that will probably continue to be the case for a long while.
Ranked Battles are where you go to strive to become the best, battling through modes such as Splat Zones and Rainmaker.
Should you obtain a high enough rank, you’ll then be able to participate in League Battles.

The single player Hero Mode returns, and this time around it is not just the Great Zapfish you are tasked with rescuing. Marie of the Squid Sisters has disappeared, so Marie recruits you to find her.
You can choose from a variety of different weapons to play through each level with. Once you’ve completed all the levels with a specific weapon, you are able to use a replica of it in the multiplayer modes.

One of the new stages, Musselforge Fitness

Alongisde familiar areas like Moray Towers and Port Mackerel, Splatoon 2 introduces several new stages. You can see Musselforge Fitness directly above, and the screenshot of the two Inklings further up the post is taken from Starfish Mainstage.

A few new amiibo were released alongside Splatoon 2, and much like in the first game, you can use them you can use them to gain exclusive gear. My Splatoon Inkling Girl amiibo has allowed me to unlock the school uniform, which I favoured in the first game until I got hold of the Squid Girl outfit. Unfortunately, it seems unlikely that the Squid Girl clothes will return.

Much like the original game and ARMS, updates for Splatoon 2 have been and will be rolling out. These updates will add new stages, fashions and weapons. Recently, the Dualie Squelchers were added to the game. I happen to favour those weapons at the moment, despite not being a fan of the Dual Squelcher from the first game…

Splatoon 2 takes an rather complicated approach to voice chat. Rather than plugging a headset into the Switch, you need to download an app and do it through that. I personally don’t use it, because my phone has no memory available due to Twitter, Love Live School Idol Festival and Fire Emblem Heroes. Also, I’m not exactly a talkative person either, and I managed to play Splatoon fine without any sort of voice chat.

Splatoon 2 is a great game, and those extra modes help to bring some freshness to the franchise. Whether you are familiar with the franchise, or have yet to discover whether you are a kid or a squid, this is a game that I can happily recommend.

I enjoy writing, manga, anime and video games, so naturally here on my blog, you will find anime reviews, Nintendo news and other such things that I deem interesting.
View all posts by Rory →
This entry was posted in Games of the Month and tagged August 2017, Game of the Month, Nintendo, Nintendo EPD, Nintendo Switch, Splatoon 2, Third-person shooter. Bookmark the permalink.