Before I begin, it seems likely that the PreCure Dream Stars! film will soon get subbed, by the same person who has been subbing these. Sure enough, you can expect me to share my thoughts on it once I have seen it – that will make a nice post to fill one of the empty days listed on my schedule.
But enough of that, let’s concentrate on KiraKira ☆ PreCure a la Mode‘s twenty-fourth episode. We have new villains to meet, whilst a familiar face transfers into Ichika’s class.

So Pikario isn’t dead, he’s just not very well. Chourou says the ancient PreCure is protect his essence, so it seems very likely that he will wake up at some point later on – I imagine closer to the end of the series.
The ancient PreCure grants a gift to the six Cures; Chourou guesses that they are messages. That’s all we learn about those for the time being.
All right, time to meet a couple of new villains. 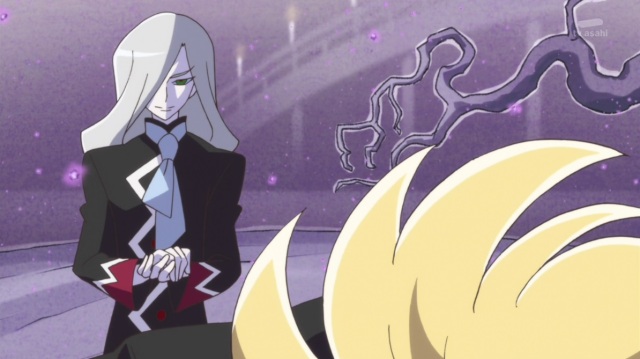 Grave and Elysio are Noir’s underlings. Elysio brings a message from Noir: to create a world in which humanity’s souls will drown as soon as possible. Of course, that means collecting a lot of kira-kiraru.
After that, back to Ciel. She’s determined to work even harder after becoming Cure Parfait, and she happens to see Ichika’s dad and his karate students. Now, I have said before that I would like to see at least one of the Cures study karate under Genichirou.

This episode delivers – though only for a scene.

Ciel works up quite an appetite with the training, so Ichika invites her to grab a bit to eat. As Ciel and Ichika talk to Genichirou, he asks if Ciel is a friend from school. This gives Ciel an idea.

Ciel turns out to be perfect – or rather, ‘parfait’ – at almost everything she does. Japanese proves to be something of a struggle, though.
Before she knows it, it is lunchtime and Ciel is very hungry. So hungry, in fact, that she is unable to retain her human form. 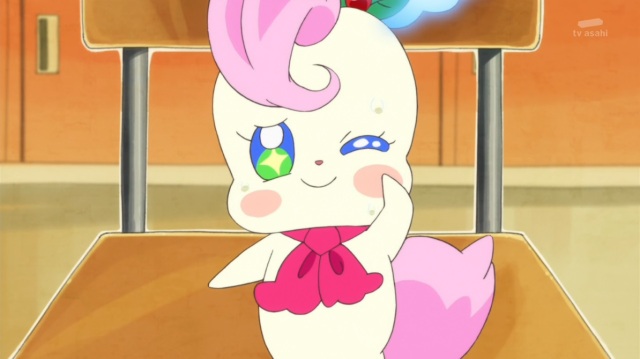 Kirarin reverts to fairy form in front of her fellow pupils

Kirarin then flies through the school, causing a commotion. Hmm… a fairy flying through a school causing a commotion… that sounds like something I’ve seen before…
Kirarin gets chased by the students, but a co-ordinated effort between Ichika, Himari and Aoi allows her to escape. She ends up in a cardboard box, and the first person to discover it is the school’s headmaster.

Ichika uses a terrible pun to distract the headmaster

The headmaster is the type that finds terrible puns hilarious, so he has a laughing fit whilst Ichika and the others retrieve Kirarin.
The girls find an empty corner on the roof, and Kirarin admits that she turns back into a fairy when she is hungry. Ichika, Himari and Aoi say that Kirarin should eat lunch together with them, as they are friends. Eating with friends also makes the food taste better.

If she fits, she sits

Ciel returns to her human form, and then a flying car passes overhead. It is collecting the kira-kiraru from the town, so Ichika and the others go after it. This is the first encounter with Grave.

Chocolat and Macaron appeared after the transformation sequence

Grave isn’t going to fight PreCure himself. Nope, instead, we get a monster of the week, because direct confrontation with the Cures doesn’t usually end positively for the villains.

Cure Parfait charges ahead of the others, but that turns out to be a mistake. Whip tells her that they can rely on each other, and the Cures launch a joint attack.

This moment genuinely made me laugh out loud

Standard finishing procedure takes place at the end of the fight, with Cure Parfait’s finishing move. PreCure then watch as Grave retreats. 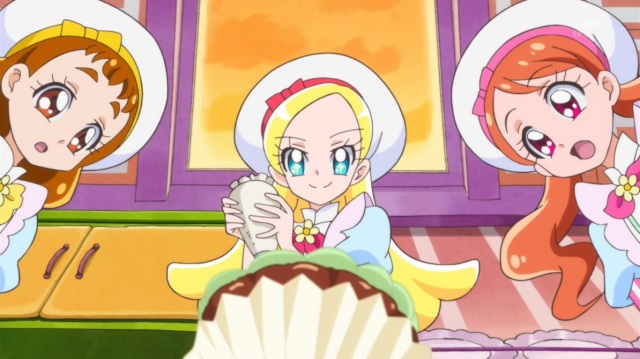 Ciel officially becomes a part of KiraPati. She makes some cupcakes, and then Ichika has a flash of inspiration.

I had a lot of fun watching this episode. I suppose it makes sense to have things be more light-hearted considering what happened last time, and that certainly proved to be an enjoyable decision.
Ciel is still a pretty great character, though Yukari will remain my favourite. Actually, I could see those two striking up something of a rivalry, what with Yukari being perfect and Ciel being ‘parfait’. I don’t know if something like that would happen, but that could be fun.

Grave and Elysio look like villains I have seen many times before. That’s not necessarily a bad thing, but my opinion of them will be based more on their actions rather than their appearances. Grave has a sweet ride, though.

This episode was just some perfect light-hearted fun to follow up the events of the previous one, and that was fine with me. Looks like the next episode will be a particularly good one, as the focus will be on Yukari and Akira.