Thoughts on Cells at Work! Volume 3

I did want to share my thoughts on another yuri manga this weekend, but it has yet to be delivered at the time of writing. Nevertheless, I still have plenty of other manga to talk about, so this time around I’ll be sharing my thoughts on Akane Shimizu’s Cells at Work! once more.
There are a total of five chapters in this volume, running from chapter ten through to chapter fourteen. 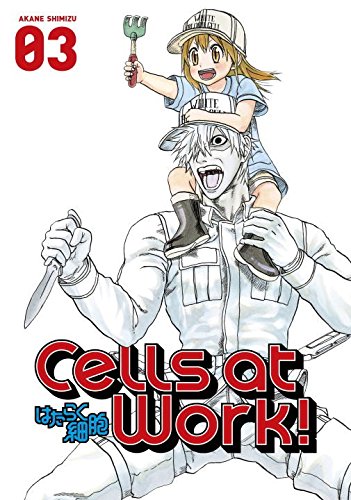 TO CATCH A COLD
To fight on the front lines of the immune system, hardworking cells must undergo intense training. Killer T Cell and Helper T Cell are the best of the best now, but back in their academy days they were nothing more than little cells with big dreams and an even bigger rivalry. Meanwhile, some of the trickiest problems turn out to be the most mundane. The common cold proves to be a serious prankster who’s hard to handle, and the usually calm White Blood Cell finds himself dealing with one of the most annoying everyday maladies… acne.

This volume opens with chapter 10, ‘The Circulatory System’. Red Blood Cell determined to make her way through the circulatory system without getting lost again. Unbeknownst to her, White Blood Cell decides to keep an eye on her and deal with any threats before they can reach her.

In chapter 11, ‘The Common Cold’, a normal cell encounters another one with a ‘stylish hat’. The cell with the hat turns out to be quite the prankster, and he causes trouble for the immune cells.
The normal cell soon learns that his new friend is actually a virus infected cell, though the immune cells step in before he can be infected as well.

We delve into the past of Killer T Cell and Helper T Cell in chapter 12, ‘Thymocytes’. Its like their personalities switched after they graduated from the academy – Helper T Cell was the rough and ready one, whilst Killer T Cell was much more meek then he is now.
Killer T was able to graduate thanks to the help of Helper T, though they were more rivals than friends.

Memory Cell has a dream that he believes to be a glimpse of the future in chapter 13, ‘Acquired Immunity’. The dream comes true when a whole horde of virus infected cells appear, and all Memory can do is panic.
Memory and B Cell go look for a solution to the crisis. A blow to Memory’s head knocks some sense into him, and he realises he didn’t dream the future. Rather, he was recalling the past – and as such, they are able to counter the virus infected cells with antibodies.

That brings the third volume of Cells at Work! to an end, and I still think it is a lot of fun. To celebrate the release of the fifth volume in Japan, Kodansha released an animated advert for the series:

Before I saw this advert I would have liked to see an anime adaptation of this series, but that desire has only increased after seeing the advert.

I particularly enjoyed the way in which this volume portrayed rather common things like the cold and spots as life-threatening to the cells. Whilst they can be annoyances for us humans, seeing how much effort the cells have to exert to deal with the threat is interesting.
The action continues to be as bloody as ever, at least when it’s not focusing on Red Blood Cell trying to do her job. Well, then again, White Blood Cell winds up with his hands full looking out for her from out of sight…
It has pretty enjoyable humour, too. Killer T Cell and Helper T Cell reacting to the photos of their academy years was pretty funny, and the slapstick humour of the prankster virus infected cell was something that amused me.

And of course, this particular series is educational as well. Whenever a new cell, germ, virus or similar is introduced, there’s generally an info box to explain it. This even extends to bodily functions such as sneezing.
You’ll probably be able to remember the details about the main characters, because that info box crops up every time someone like White Blood Cell first appears in a chapter. Since the series is serialised monthly it makes sense to include them, but they are excessive when the chapters are collected together in a single volume.

I enjoy writing, manga, anime and video games, so naturally here on my blog, you will find anime reviews, Nintendo news and other such things that I deem interesting.
View all posts by Rory →
This entry was posted in Manga and tagged Akane Shimizu, Cells at Work!, Comedy, Manga, shounen, Volume 3. Bookmark the permalink.