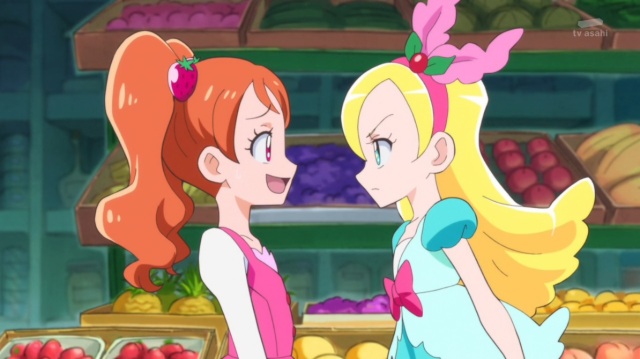 Ichika and Ciel both mention kira-kiraru

It seems that Ciel can be just as dense as Ichika sometimes, as neither of them actually process that they said kira-kiraru until after they’ve parted ways…
Ichika returns to KiraPati, which suddenly seems to be haunted. Chourou has everyone go to Strawberry Mountain, and Pekorin hands Ichika an umbrella.

The umbrella sparks off an impromptu fireworks show

The fireworks attract the attention of a whole load of fairies, who gather on Strawberry Mountain. Ciel also happens to witness them as well.

The fairies were scattered, but Gummy and the other fairies that PreCure fought before were able to find them and guide them to Strawberry Mountain.
With the fairies reunited – well, except for two named Kirarin and Pikario – it’s time for a party. Of course, Ichika is hit by a flash of inspiration.

The fairies make mousse cakes, and much jubilation is had. Ciel also happens to arrive during the celebration.
Of course, all that kira-kiraru doesn’t go undetected, so Bibury decides to set off to claim in the name of Noir. Julio tries to go instead, but Bibury doesn’t let him do so. However, Julio’s ambition to defeat the PreCure does not go unnoticed.

Our first glimpse of Noir, who restores and powers up Julio’s Noir Rod

Back on Strawberry Mountain, Ciel seems to be familiar with the fairies. They have no clue who she is, at least not at first. 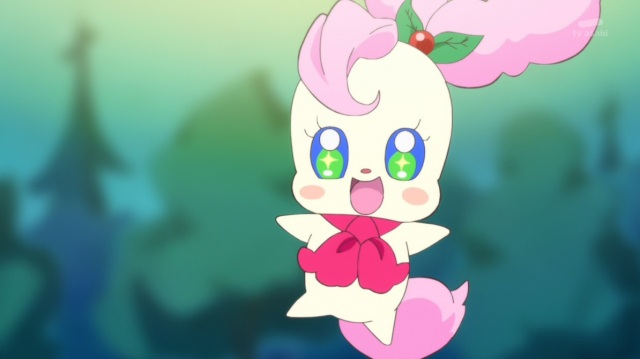 Ciel reveals herself to be the fairy Kirarin

Naturally everyone is quite shocked by this revelation – the audience isn’t though, because Toei is pretty crap at keeping secrets…
It doesn’t take long before Bibury crashes the party and steals the kira-kiraru of the fairy mousse cakes. 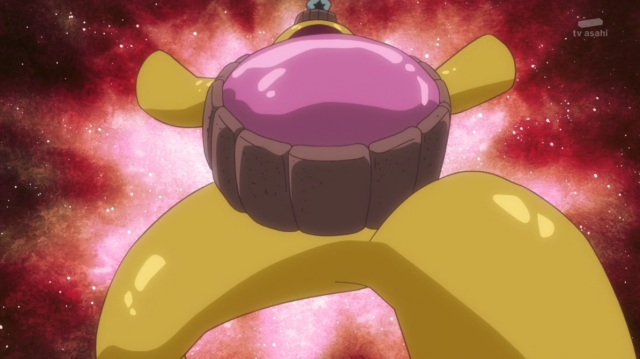 Here’s Iru’s form for this week

Of course, standard procedure follows on from that, and Ichika and the others transform. Kirarin is thrilled to see the legendary PreCure with her own eyes.

See? Look how stoked she is!

The Cures have a pretty easy time preventing Iru from escaping with the kira-kiraru, which only serves to tick off Bibury.

Bibury powers up Iru with her own kira-kiraru

The tide of battle changes, and Ichika finds herself about to be attacked. Ciel has no qualms about intercepting the attack, because she looks up to PreCure. 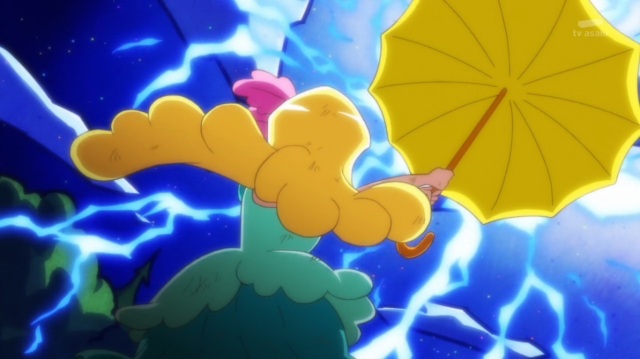 Ciel reverts to her fairy form after that, but the Cures take the opportunity to bring the battle to a close.
With that taken care of, Kirarin has something she wants to ask Cure Whip.

How the tables have turned, huh? Kirarin even says the same things Ichika did when she was asking to become Ciel’s apprentice.
Just then, another uninvited guest appears.

Kirarin seems to feel a familiar sensation when Julio shows up… hmm, I think I’m starting to get a clear idea of Julio’s real identity.
That’s where the episode ends, so we’ll have to wait until next week to see what happens next.

This episode was pretty good; I enjoyed it a fair bit. I do think Ciel’s reveal might have been more effective if the audience hadn’t been made aware of it beforehand. This is Toei, though, and they’re not exactly the best at keeping things under wraps.
We got to see the current big bad, and sure enough, he wouldn’t really look out of place in a Kirby game. I can appreciate that.
With Julio’s arrival, I’m guessing we’re heading towards the mid-season climax – that visual that I mentioned at the beginning of this post seems to be further evidence of that. PreCure may find themselves confronting Noir himself sometime soon…

Next time… well, it’s a direct continuation of this episode.