KiraKira ☆ PreCure a la Mode Episode 19: This Is Me

A pâtissière prodigy arrives in town in episode 19 of KiraKira ☆ PreCure a la Mode, and Ichika is very keen to learn from her. Said prodigy has actually been appearing during the opening theme since the beginning. 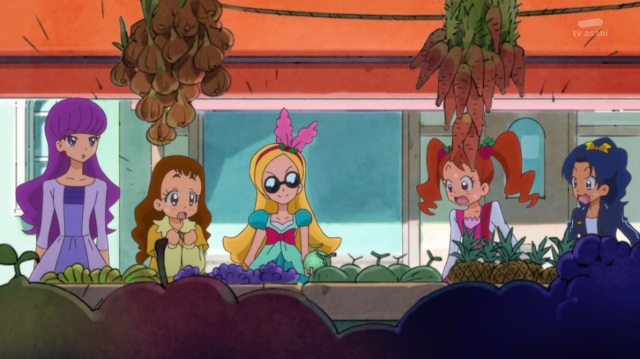 Ciel Kirahoshi appears from out of nowhere

Whilst Ichika and the others are out for shopping for some fruit, Ciel Kirahoshi suddenly appears. It takes them a few moments, but they soon realise just who she is – and soon enough a large crowd gathers to see the prodigious pâtissière.
Ciel announces that she will be opening a new shop in Strawberry Hills and encourages everyone to visit. Naturally, Ichika and the others go to check it out. 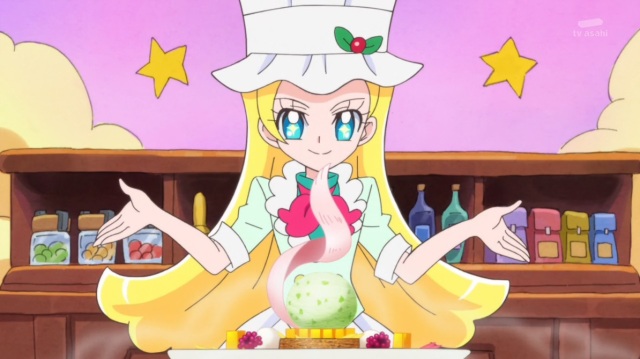 Ciel makes a galette for Ichika and co.

Being impressed by Ciel’s galette, Ichika requests to become her apprentice. Ciel turns her down at first. 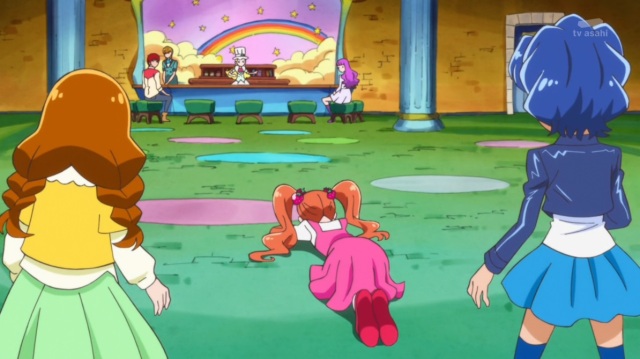 Ciel can’t help but be amused by Ichika’s begging, and decides to give her a test to see if she is worthy of becoming her apprentice. Ciel challenges Ichika to make something that says “this is me”. 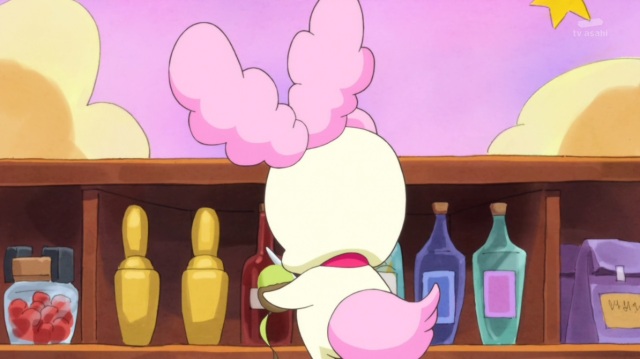 A Pekorin-lookalike peeling a kiwi

Ichika goes over to Ciel’s shop when she has a day off, and spots quite an interesting sight. When she goes inside the shop, Ciel greets her. Ciel has been creating trial runs of sweets using kiwi as a theme, and allows Ichika to try some. The time then comes for Ichika to make her “this is me” dessert. 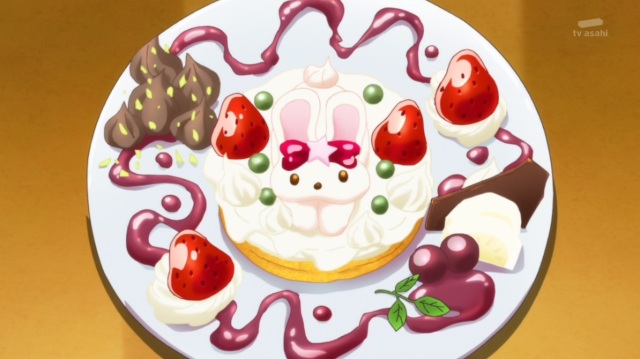 Unfortunately, Ichika isn’t able to satisfy Ciel with her shortcake. However, Ciel is inspired to create something from Ichika’s effort. 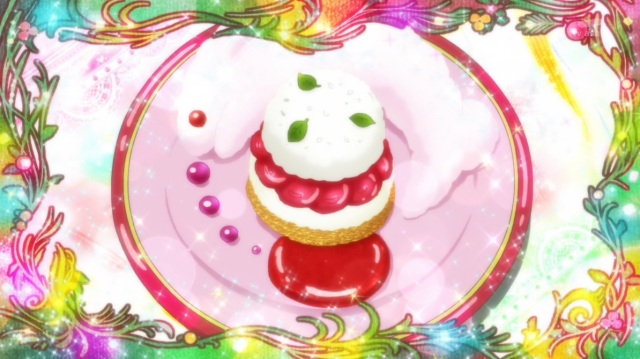 Ciel goes off to make some tea, given Ichika a chance to flick through her notebook. She sees that she and Ciel share the same feelings when it comes to sweets. 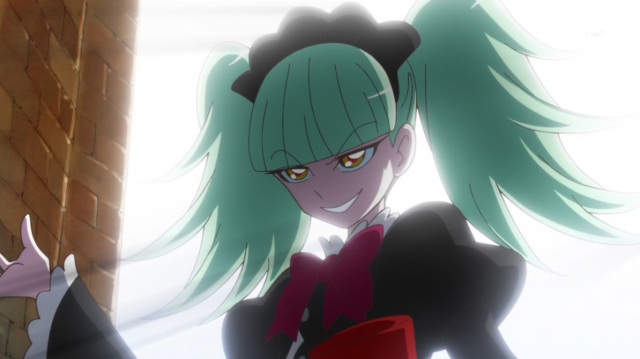 Having overheard people talking about the pâtissière prodigy’s shop, Bibury decides to drop by to claim its top quality kira-kiraru. 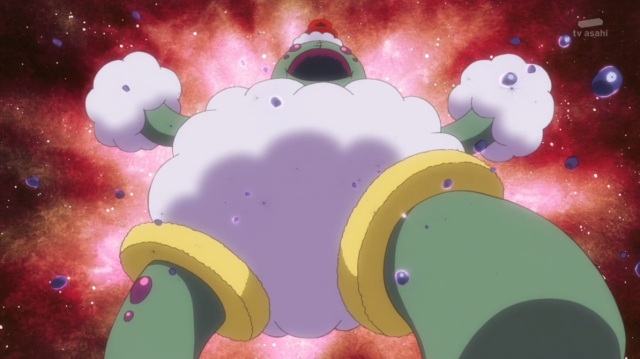 Here’s Iru’s form for this week

Ichika transforms into Cure Whip to confront Iru. Ciel rushes outside, and ends up getting knocked aside when Iru jumps down from the roof. Whip does her best to fight Iru, but she ends up in a sticky situation. Fortunately, the other Cures show up just in the nick of time. 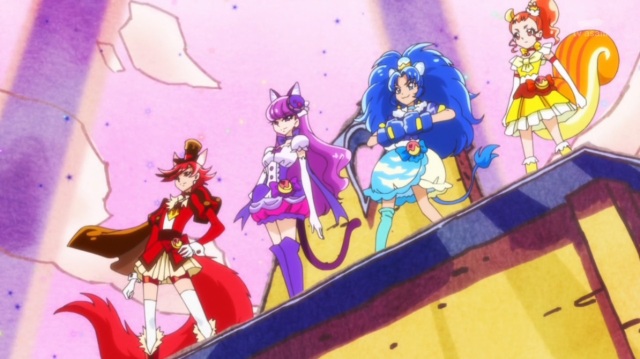 The other Cures arrive 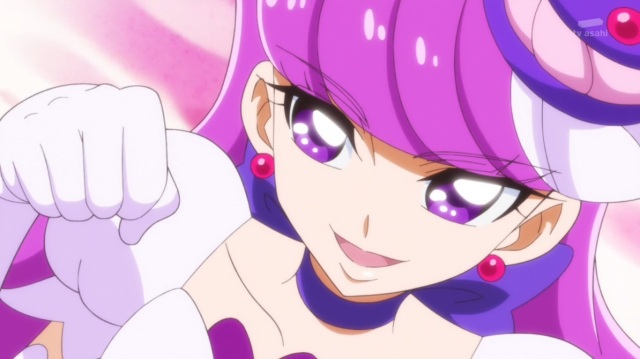 After the showcase of special moves, the Cures end the battle in the usual manner. Ciel is able to remain conscious long enough to see PreCure do their thing. 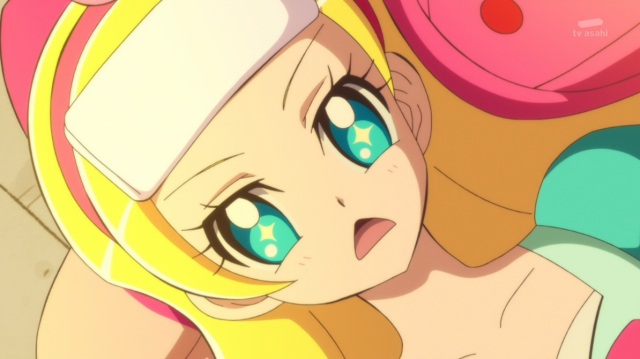 Ciel asks after PreCure, and Ichika just tells her that they’ve gone home. Ichika thanks Ciel for everything before she leaves, and says that she has no intention of giving up just yet.

That’s it for this episode, and I quite liked it – I definitely enjoyed it more than the previous one. I quite like Ciel, and as such think she is a pretty good addition to the cast.
I’ll admit that out of all the Cures, Ichika remains my least favourite. However, if she gets more episode like this I definitely feel like I’ll be able to appreciate her slightly more.
On the other hand, I feel like Bibury will be somewhat overshadowed by Ciel. I feel that Ciel will have much greater focus over the course of the next couple of episodes at least, particularly because of her true identity.
Bibury is pretty much just there to fulfil the one battle per episode quota at the moment, and as such I don’t really think too much of her. I do like her design, but that’s probably because I like the twintail hairstyle. Iru also somewhat fills the void of the monster of the week that KiraKira ☆ PreCure a la Mode has been missing, but it’s just not quite the same as previous iterations’ monsters of the week.

Next week… well, there won’t be an episode of KiraKira ☆ PreCure a la Mode next week because of golf of all things… However, the week after that, it will be back and Ichika will have a chance to learn more about Ciel – including who she looks up to.

Finally, it is around 8:30pm on June 11th as I type this. June 11th is the important part here, as it is Yukari Kotozume’s birthday. 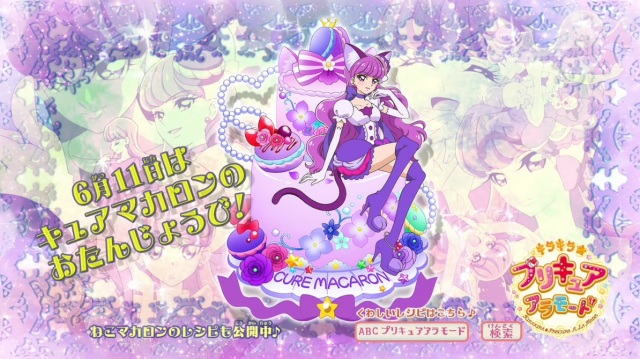 1 Response to KiraKira ☆ PreCure a la Mode Episode 19: This Is Me