Thoughts on Bleach Volume 35: Higher Than the Moon

All right, time to go back to sharing my thoughts on the Bleach series. Volume thirty-five continues the Arrancar arc. After a seemingly hopeless spot for the heroes, reinforcements arrived to back them up.
There are a total of ten chapters in the thirty-fifth volume, which opens with chapter three hundred and six and finishes with three hundred and fifteen. 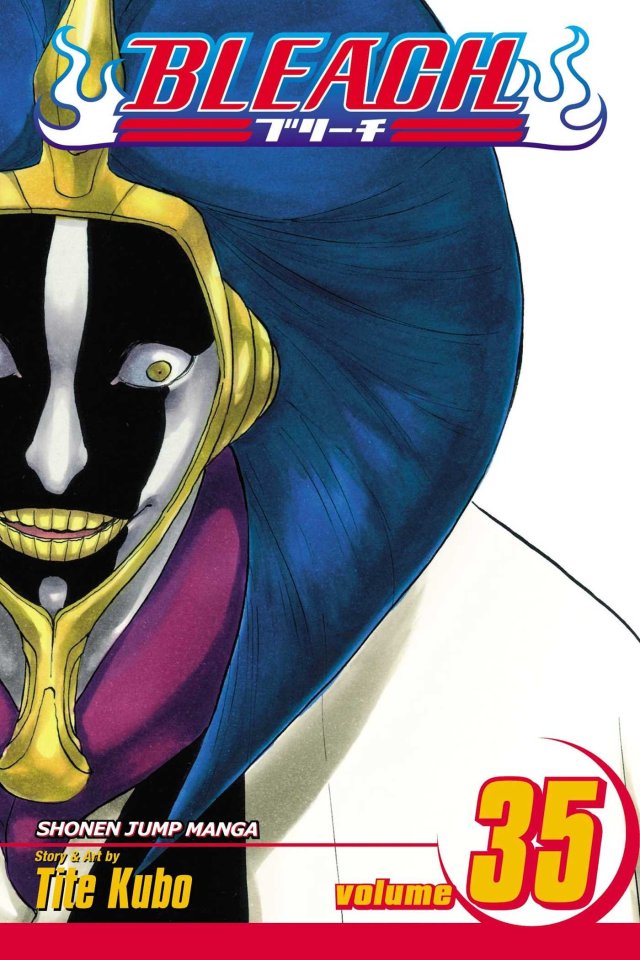 Born and then fall
Is the same as death

While the Soul Reapers are entrenched in bloody one-on-one battles with the Espadas, their sworn enemy Aizen is preparing to make the next move in his elaborate plan. The battlefields of Hueco Mundo will soon give away to another battlefield where the price of losing will prove to be infinitely higher.

Volume 35 starts with chapter 306, ‘Not Perfect is GOoD’, which shows Szayelaporro suffering after his encounter with Mayuri. Mayuri has a speech about how he hates perfection – if someone achieves it, then there’s nothing more. Perfection is a dead end. Whilst Mayuri tends to the wounds of Nemu, Kenpachi continues to fight Nnoitora.

Mayuri turns his attention to Uryû and Renji to fix their wounds in chapter 307, ‘Bite It, Slash It’. There are protests, but Mayuri pays them no heed.
Kenpachi finds himself unable to cut Nnoitora, so he tries targeting his eye. Though Kenpachi’s blade finds its mark, Nnoitora is unfazed and wounds the captain.

Nnoitora reveals that his Hollow hole is located where his eye should be in chapter 308, ‘SATAN FROM ORBIT’. This only increases Kenpachi’s bloodlust, and he is finally able to muster up the strength to cut Nnoitora.

A wounded Nnoitora releases his Resurección in chapter 309, ‘Pray for the Mantis’. Santa Teresa heals Nnoitora’s wounds, and gives him four arms. Kenpachi eagerly charges his foe, only to be cut down.

Nnoitora turns his attention to Yachiru in chapter 310, ‘FOUR ARMS TO KILLING YOU’. Orihime tries to rush over to protect her, but Kenpachi isn’t out of the fight yet. He cuts off one of Nnoitora’s arms, but he just grows it back. The Espada gains six arms to use against Kenpachi.

Not one to shy away from a tough battle, Kenpachi continues to rush at Nnoitora in chapter 311, ‘The Undead 4’. Kenpachi takes multiple hits, and decides he needs to take things more seriously lest he die. He simply wields his sword with both hands.

Despite being heavily injured, Nnoitora insists that the fight continues in chapter 312, ‘Higher Than The Moon’. Kenpachi complies.
A flashback shows that Nnoitora was saved by Nelliel in the past, and he despises the pity she felt for him. Nnoitora falls at the end of the chapter.

A flashback at the beginning of chapter 313, ‘TO CLOSE YOUR WORLD’, reveals that Nnoitora wanted to die fighting.
Kenpachi asks Orihime to heal his wounds, but before she can do anything another Espada and takes her back to Aizen before anyone can react. Once Orihime is back with Aizen, he announces his intention to wipe out Karakura Town.

Aizen reveals his plan to create the Ôken in chapter 314, ‘Night Side of Abduction’. He then announces to all the invaders of Hueco Mundo that he is about to begin his invasion of the world of the living. Having a handful of captains arrive in Hueco Mundo was part of his plan, as they could be sealed in there and reduce the Soul Society’s strength.
Ichigo is desperate to get back to Karakura Town, but Kenpachi reassures him that the Soul Society have already prepared for Aizen’s invasion.

It is revealed that a fake Karakura Town had been set up by the Soul Society in chapter 315, ‘MARCH OF THE DEATH’. The remaining captains of the Soul Society are there to meet Aizen when he comes through from Hueco Mundo.
Whilst Aizen and the top three Espada focus on the Soul Reapers, Ulquiorra is left in charge of Las Noches.
Ichigo takes off, heading straight for Ulquiorra in order to save Orihime.

That brings volume 35 to a close, and I really like Mayuri’s philosophy when it comes to perfection. If it was theoretically possible to achieve perfection, there would be nothing beyond. I can agree with Mayuri when he says perfection is boring – even if I am in agreement with a mad scientist. Still, the whole idea here is that you can always strive to be better.
Of course, the highlight of the volume is Kenpachi’s fight against Nnoitora. Being a captain without a shikai or bankai, all Kenpachi can really do is just swing his sword. He really quite enjoys doing that, which makes his lust for battle quite a sight to behold. Also, the increase in power he gets from simply choosing to wield his sword with both hands is fairly interesting.
A pretty good volume of Bleach all round, with Mayuri’s thoughts on perfection and Kenpachi fighting Nnoitora. It even sets up the next part of the Arrancar arc.
Before we get to that, however, the next volume of Bleach delves into the past of a particular group of characters.

I enjoy writing, manga, anime and video games, so naturally here on my blog, you will find anime reviews, Nintendo news and other such things that I deem interesting.
View all posts by Rory →
This entry was posted in Manga and tagged Action, Adventure, Bleach, Manga, supernatural, Tite Kubo, Volume 35. Bookmark the permalink.