Let’s start this post off with a little trivia about myself – the first home console I owned (well, I suppose it was more of a family console) was Sega’s Master System. Out of all the games we owned for it, there were two I particularly enjoyed: Wonder Boy in Monster Land and Wonder Boy III: The Dragon’s Trap.
The latter of those two games has returned, courtesy of Lizardcube, and that is what I’ll be focusing on here.
Wonder Boy: The Dragon’s Trap– 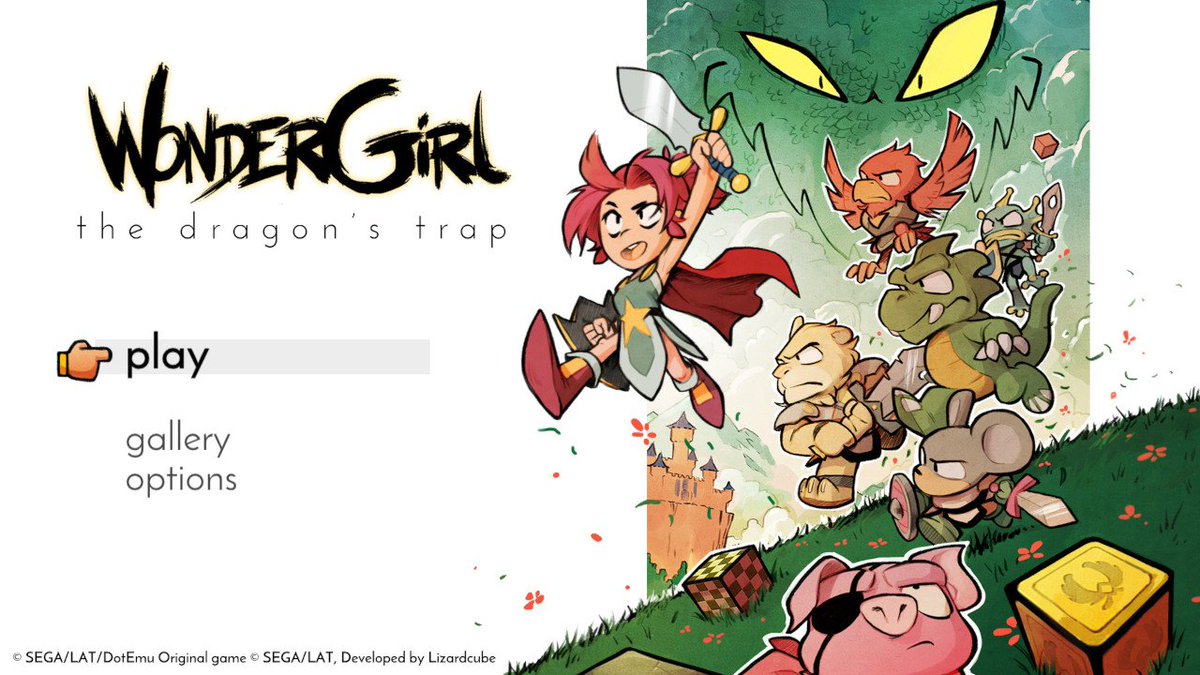 – or Wonder Girl, if you prefer

Anyways, the game picks up directly at the end of Wonder Boy in Monster Land, with the hero making their way through a castle to confront Meka-Dragon. Though the hero is able to defeat Meka-Dragon, they end up being cursed and turned into a half-human, half-lizard.
They then have to escape the crumbling castle, before ultimately proceeding on an adventurous undertaking to return to their human form.

During the course of the game, the hero will assume different forms with unique abilities. The Mouse form allows the hero to stick to certain walls, whilst the Piranha form allows the hero to swim.
Throughout the world there are shops that sell weapons and armour – some forms may receive extra benefits from equipping certain items.
The hero is also able to use sub weapons: fireballs, tornadoes, arrows, boomerangs and thunder flashes. Arrows are shot straight up, perfect for dealing with enemies above. Boomerangs return to the hero after they’ve been thrown, providing a fairly useful ranged attack that can be used over and over.

Treasure chests are also hidden throughout the world, often containing money, sub weapons and/or life upgrades. Since the hero starts with only one heart after being cursed by Meka-Dragon, it’s a good idea to seek them out.
The hero will also encounter a fair few locked doors during their adventure, which means having to seek out keys. They can also be found in treasure chests, or dropped by a defeated foe.

Wonder Boy: The Dragon’s Trap has a Retro Feature. A simple press of a button can switch between HD and 8-bit graphics at any time, so those who feel particularly nostalgic for this game can experience it the same way they did when they first played. It isn’t just the graphics, either – it’s possible to switch between HD and 8-bit audio as well. You can even combine the retro and the modern if you so desire; HD graphics and 8-bit audio, or 8-bit graphics and HD audio.

If you’ve played the 1989 original Wonder Boy III: The Dragon’s Trap and have a password or two floating around from back then, they are fully compatible with this game.

Wonder Boy: The Dragon’s Trap is a great remake of the Master System classic, and all around fun action-adventure platformer.

I enjoy writing, manga, anime and video games, so naturally here on my blog, you will find anime reviews, Nintendo news and other such things that I deem interesting.
View all posts by Rory →
This entry was posted in Games of the Month and tagged Action adventure, April 2017, DotEmu, Game of the Month, Lizardcube, Nintendo Switch, Platformer, Wonder Boy: The Dragon's Trap. Bookmark the permalink.