The previous of volume of Bleach shared some revelations about Ichigo’s and Uryû’s fathers, as well as introduce a new character who possesses an interesting power.
In the twenty-second volume, a new threat arrives in Ichigo’s hometown – whilst Ichigo has to contend with his inner Hollow.
There are ten chapters in this volume – one hundred and eighty-eight up to one hundred and ninety-seven. 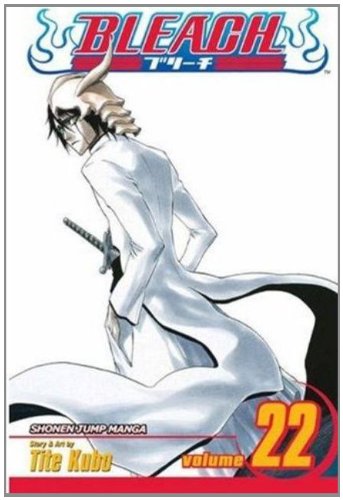 The noose is tightening around Ichigo. His inner Hollow can’t wait to consume him, the sinister transfer student has him tapped for a mysterious job, and now powerful new enemies have landed in his hometown to destroy him.

Kisuke meets with Isshin in chapter 188, ‘CRUSH THE WORLD DOWN’, and they discuss Arrancar, the Vizards and Aizen. At the end of the chapter, a captain’s meeting is called in the Soul Society.

Ichigo ponders the Vizards in chapter 189, ‘RESOLVE’. He has to put up with Shinji’s antic during school. After school, Orihime and Chad approach Shinji to ask who he actually is, and they meet another Vizard – Hiyori.
Uryû goes to Ryuken in order to get his powers back, and swears not to associate with Soul Reapers again.

Hiyori Sarugaki introduces herself in chapter 190, ‘Conquistadores’, before threatening to kill Chad and Orihime. Shinji grabs her and runs for it, though Chad can tell that Hiyori’s threat wasn’t empty words.
Ichigo arrives at his home in a slump, with his inner Hollow playing on his mind. Whilst wondering what he should do, Karin tells him that she knows he is a Soul Reaper.
The R&D department in the Soul Society detect something arriving in eastern Karakura.

Ichigo tries to play off the Soul Reaper thing in chapter 191, ‘Conquistadores 2 (Screaming Symphony)’, but the spiritual pressure of the newly arrived Arrancars distracts him.
There are two Arrancars, Ulquiorra and Yammy. Yammy literally sucks the souls out of nearby people, killing almost all of them and leaving Tatsuki in a weakened state. When Yammy tries to finish off Tatsuki, Chad and Orihime intervene. Whilst Orihime takes care of Tatsuki, Chad tries to fight Yammy – only to have his arm torn off.

Yammy tries to attack Orihime in chapter 192, ‘Conquistadores 3 (Hounded Priestess), but she is able to hold him off with her Santen Kesshun technique. Ulquiorra notes Orihime’s strange power. Orihime attempts to attack Yammy, but he just crushes Tsubaki. Yammy then reaches for Orihime, but Ichigo arrives and releases his bankai.

Orihime is awed by seeing Ichigo’s bankai up close for the first time in chapter 193, ‘Conquistadores 3 (Ebony & Ivory)’. Ichigo tries to fight Yammy, but his inner Hollow plays up. Yammy seizes the opportunity to smack Orhime aside, and goes for Ichigo afterwards.
Kisuke and Yoruichi arrive to protect Ichigo.

Kisuke fights Yammy in chapter 194, ‘Conquistadores 5 (La Basura)’, whilst Yoruichi tends to the injured Orihime. Kisuke easily gets the upper hand, but Ulquiorra intervenes and both Arrancars retreat.

Those who fought the Arrancars recover from their injuries in chapter 195, ‘Death & Strawberry (Reprise)’. Upon returning to school, Ichigo is reunited with Tôshirô, Rangiku, Renji, Ikkau and Yumichika. They aren’t the only familiar faces to return, either – Rukia is with them.

Rukia drags Ichigo out to fight Hollows in chapter 196, ‘PUNCH DOWN THE STONE CIRCLE’, in order to force Ichigo to gain the resolve he lost after he saw his friends getting injured by the Arrancar. It works.

Rukia, and the other five Soul Reapers, all go to Ichigo’s house in chapter 197, ‘The Approaching Danger’. There, they explain to Ichigo about Arrancars, and the different classes of Hollows: Gillians, Adjuchas and Vasto Lordes.
The chapter ends with Ulquiorra and Yammya reporting to Aizen.

That wraps up the 22nd volume of Bleach, which continues to serve as an introduction to the Arrancars. We see that Yammy is a powerful foe, though Kisuke’s certainly no joke, either. We don’t get to see the full extent of Yammy’s power, though – he stops just short of drawing his zanpaku-tô against Ichigo.
Ichigo’s struggle with his inner Hollow also causes him despair, particularly as a momentary lapse resulted in Orihime being injured. Shinji made it clear that he won’t give up on Ichigo, so surely it’ll be just a matter time before Ichigo seeks out the Vizards.
The return of a handful of Soul Reapers was quite funny, what with the scene they caused at Ichigo’s school. It’s nice seeing the return of some familiar faces, though we’ll have to wait a bit longer to see them in combat once more.
We did see a brief fight between Kisuke and Yammy in this volume, but that was all pretty much just setting up for the rest of this arc – we know that the Arrancars are powerful foes not to be taken lightly, and Aizen is the one pulling the strings.

I enjoy writing, manga, anime and video games, so naturally here on my blog, you will find anime reviews, Nintendo news and other such things that I deem interesting.
View all posts by Rory →
This entry was posted in Manga and tagged Action, Adventure, Bleach, Manga, supernatural, Tite Kubo, Volume 22. Bookmark the permalink.