I’ve looked at Wii U games, now my focus turns to the Nintendo 3DS. It’s been quite a strong year for role playing games on the handheld, and my list will be reflecting that, as you see.
All the titles listed here are ones that I have physical copies of – I’m sure some, if not all, are available through the eShop. It’s just I’ll always prefer physical to digital.
Much like my Wii U list, these are all games that I have played. Just not necessarily through to completion, though…

A crossover title featuring characters from Bandai Namco Entertainment, Capcom and Sega franchises, with a little sprinkling of Fire Emblem: Awakening and Xenoblade Chronicles for good measure.
Project X Zone 2 is a strategy RPG. When your characters engage an enemy in combat, things go all a bit fighting game what with you being able to input different attacks to pull off combos – and you get special attacks, complete with their own cinematics.
The mash-up of the different worlds and characters, absurd combos and the soundtrack make for a very enjoyable game.

We go from one strategy RPG to another, though this one features an original story and characters.
This game’s story features a character called Alto, who is on a quest to gather four Witches in order to stop Hilda, the Witch of the Destruction. Since Alto is the main character of a JRPG, he possesses a special power and the Witches are naturally drawn to him – some rather cliché stuff, basically.
Regardless, the game is a fun experience. Naturally you have the battles, but you can also build bonds between characters and there are multiple endings to pursue as well. Also, one of the characters is a ninja who wears a cardboard box over her head.

Kirby’s second 3DS adventure has him facing a mechanical menace, which threatens the peace of Dream Land. Of course, Kirby’s response to this is typical Kirby behaviour: go forth and consume everything in sight. It makes sense, considering Kirby’s whole shtick of gaining Copy Abilities by inhaling particularly enemies. Planet Robobot introduces 3 new Abilities: Doctor, Poison and ESP. Familiar ones such as Sword and Cutter also return, as you’d expect.
Unique to this game, Kirby can pilot mech suits known as Robobot Armour. Robobot Armour can use Copy Abilities as well, though not as many as Kirby himself.
Completing the game gives you the ability to play through a mode as a different character, and you also get the challenge of the Arena where you can take on the bosses.
You can’t really go wrong with Kirby games, and Planet Robobot is just proof of that.

Rhythm Paradise Megamix takes loads of the rhythm games from previous entries in the series and gathers them together, whilst throwing in a few new ones as well. You’ll go from interviewing a wrestler to dancing the tango with a robot via plucking hairs from onions, all to a beat. That’s only a tiny selection of the oddball Rhythm Games on offer – there’s a whole lot of quirky charm with this game.
Revisiting old Rhythm Games is fun, but the newer ones are also welcome additions to the franchise.

6: Dragon Quest VII: Fragments of the Forgotten Past

For the first time this year, Europeans got the opportunity to play the 7th entry in the Dragon Quest series. In this game, you play as a hero who has to travel the land and search for stone table fragments to make new islands rise up from the ocean depths. This is achieved by travelling back in time, where you’ll fight the evil that caused the island to disappear.
By saving the islands in the past, you expand the world map of the present.
You can also have your characters take on different vocations, once you advance far enough into the game. Master basic vocations such as Warrior and Mage opens up more advance classes, meaning more powerful attacks and spells at your disposal.
Dragon Quest VII: Fragments of the Forgotten Past is not a small game, and requires a rather large investment of time, even just to get through the story. After that, you still have plenty of extra things to do – this is a game that will keep you busy for a while. 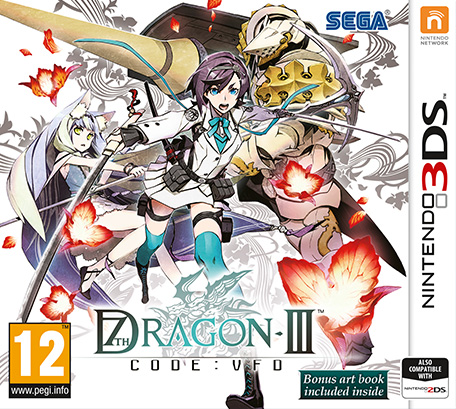 When I first picked up this game, I had only played the demo and knew next to nothing about it. However, the demo was enough to persuade me to buy it, and I’m glad I did.
7th Dragon III Code: VFD tells the story of humanity’s struggle against dragons – people fall ill with dragon sickness, spread by flowers called dragonsbane. You take control of a group of characters in order to wipe out the dragons, which involves travelling into the past, present and future.
The characters you control are ones you customise – you can choose the way they look, their voice and their class. You only have access to a few classes at first, but playing through the game soon expands that – you could have the Samurai who either dual wields or fights with a single sword, the Duelist who relies on cards to do elemental damage, or the God Hand who uses good old fisticuffs.
You’ll meet a whole host of characters throughout the story, and if you so desire, you can have the option to date them – there’s no restrictions on gender, either.
Also, the game features a cat café.

A 3DS port of the Wii U game. It’s condensed down to a 3DS cartridge (or SD card if you buy it digitally), and brings in some new things as well. All previous Hyrule Warriors DLC is included with the game, and there’s also the addition of new character Linkle. Linkle gets her own levels in the story mode, and there’s also a part that focuses on The Wind Waker.
Whilst it may lose out on a couple of Wii U features (challenge mode and co-op), the amount of content on offer makes up for that – and that’s before the new DLC stuff, which gave us characters and weapons from The Wind Waker, Link’s Awakening, Phantom Hourglass, Spirit Tracks and A Link Between Worlds.
As far as hack-and-slashers go, this might just be my favourite of the lot of them.

Honestly, this and number 2 on my list are interchangeable, but I need to put them in some form of order. As such, Monster Hunter Generations gets the third sport.
Monster Hunter is one of the few franchises I can easily sink 100+ hours into. It’s so satisfying to take down the huge monsters you have to fight, and then use pieces of them to create new weapons and armour.
Generations introduces Hunting Styles and Hunter Arts. There are four different Hunting Styles: Guild, Striker, Aerial and Adept. Guild is the most balanced style, Striker is all about using Hunter Arts, Aerial involves jumping around and mounting monsters, whilst Adept powers up attacks my dodging a monster’s attack at the last second.
With a slew of weapon types, and the four different Hunting Styles, there’s many different ways to approach any quest.
Hunter Arts are basically special attacks, providing high damage, buffs or even healing allies.
You can get Felyne companions called Palicoes in this game, or you can even play Prowler Mode, in which you directly control a Felyne.
With plenty of monsters, weapons and quests on offer, Monster Hunter Generations is another game that will keep you busy for a while – and you can always go online with up to three other hunters. 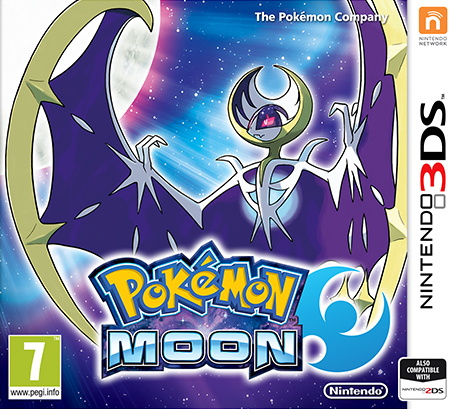 The 7th generation of Pokémon games does away with Gyms and their badges, and instead sees you tackling the Island Challenge of the Alola region. You also get involved in the creation of a Pokémon League, something Alola doesn’t have when you first start out.
Also newly introduced are Z-moves, which are super-powered versions of attacks your Pokémon can use by holding a Z-Crystal. Certain Pokémon, such as the fully evolved starters or Pikachu, get their own unique Z-moves. On top of the unique Z-moves, there’s one for each type.
We are also introduced to Alolan form Pokémon – Pokémon from the Kanto region that have adapted to the Alolan environment, resulting in them becoming different types from normal.
The characters in the game are pretty great – particularly Lillie. I quite like all the fan art going around that pairs her up with the female protagonist. There’s also the evil Team Skull, who might just be the best evil team we’ve had so far.
I haven’t even mentioned the new Pokémon yet, either. There’s some pretty great designs in there, and I have to say I’m quite a fan of Primarina – that would be Water type starter Popplio’s final form, which gains Fairy typing as well.
For those who are curious, my team consists of Primarina (nicknamed Minami), Raichu (nicknamed Yayoi), Salazzle (nicknamed Towa), Tsareena (nicknamed Kotoha), Kommo-o (nicknamed Itsuki) and Porygon-Z (who I haven’t actually got around to giving a nickname yet). Palossand and Sylvally were a couple of others I had on my time for a short while, too.
Pokémon Sun and Moon are great new additions to the franchise, and certainly help to make things feel fresh by eschewing the eight gyms formula in favour of the island trials.

Out of all the video game franchises out there, only Fire Emblem surpasses The Legend of Zelda as my favourite. Fire Emblem Fates actually has three different parts – Birthright, Conquest and Revelations – but I was fortunate enough to get the limited edition that includes all three. Which is good, as I can include them all as a single entry.
In Fates, the kingdoms of Hoshido and Nohr clash, and your character has to decide who they want to side with. There’s also the third option, which the Revelations path covers.
Your character is a custom avatar, who also happens to be of royal blood. Oh, and also possesses the ability to transform into a dragon, like the Manaketes from previous entries.
One of Fire Emblem‘s key features is perma-death – if a character dies in battle, they are gone for good. Sure, you have the option to turn it off, but that’s not in the true spirit of the game.
Just to ensure that a character’s death hits harder than it should, you can see them grow alongside the other characters and even have support conversations – this allows them to display their unique personalities. Build up enough of a bond between two characters, and they may even have a child who can join your army after some rapid ageing shenanigans in the Outrealm.
Also, for the first time in the series, the game features gay marriage. If you choose to pursue that path though, you do miss out on the avatar’s child.
Gameplay has you, the player, and the enemy take it in turns to move your units, having them engage in combat. There’s a wide variety of classes available, with roles such as healer and thief also being covered alongside the more standard combat classes.
The Hoshido side actually gives us something of an Eastern twist on the classes – you get ninjas, samurai and shrine maidens.
Much like Monster Hunter, Fire Emblem is a franchise that I can sink hundreds of hours into – particularly as I effectively have three different games with the three different paths on offer in Fates.