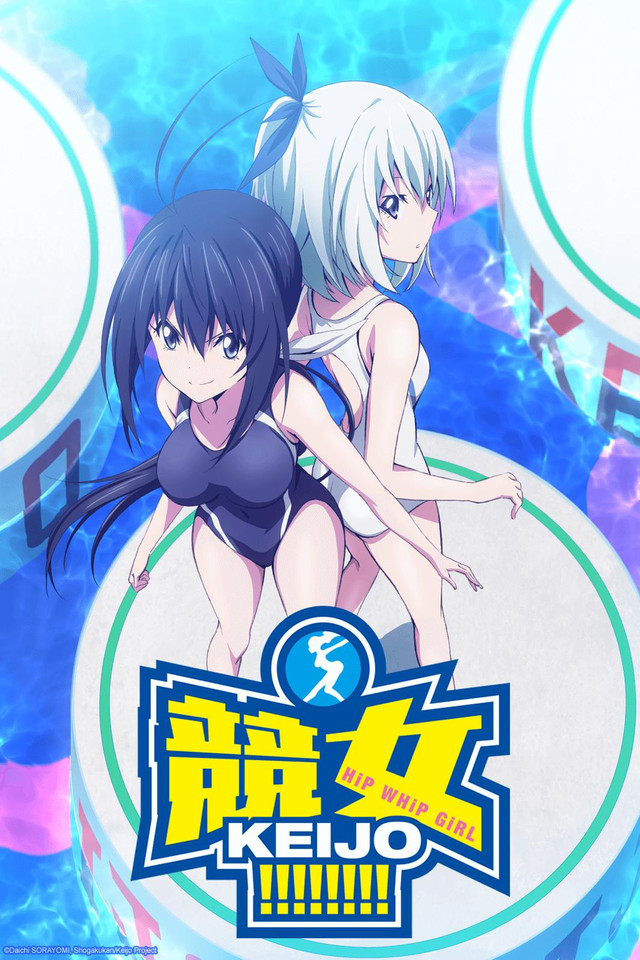 Keijo!!!!!!!! (that’s 8 exclamation marks, just so we’re clear) is a 12 episode anime adaptation of the sports manga series written by Daichi Sorayomi.
The anime was directed by Hideya Takahashi, and the studio that produced it was Xebec. Keijo!!!!!!!! aired as part of the autumn 2016 season, and is available on Crunchyroll.

A good place to start would be by introducing the sport of keijo – considering the whole series revolves around it, what it actually is may make or break someone’s decision to watch it.
The fictional women-only sport of keijo has players on top of a platform in the middle of swimming pool, called a Land. The goal is to knock the other players off of the Land or incapacitate them – which can only be done by using breasts and butts. 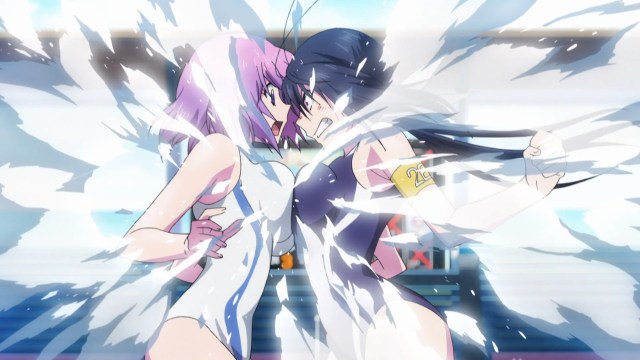 Expect to see plenty of scenes like this one.

The sport of keijo, and the anime itself, is as ridiculous as it sounds. The keijo players all use different techniques, resulting in a varied array of breast and butt techniques.
‘Shoryucans’ is an example of one of the earlier techniques we see, and things only happen to get even more absurd from there. These ridiculous techniques also include homages to other manga and anime series, with the Fate series and Attack on Titan serving as inspiration for a couple of techniques.
The variety of techniques on offer allows the show to never go stale; you’re never sure what absurd technique will be used next.

Keijo!!!!!!!! certainly has a ridiculous premise, but it takes and runs away with it. It probably helps that the characters all take keijo extremely seriously, making for a rather nice contrast with the surreal techniques we see being employed.
The absurdity of it all really cannot be exaggerated. It feels as if every new episode comes with a character using a technique more ridiculous than those that came before, and the best thing is that that trend continues throughout the entire run.

Oddly enough, Keijo!!!!!!!! pretty much fits into a standard formula established by shonen anime. We have different techniques, observers explaining said techniques and plenty of hot-blooded battles.
This series really stands out though, thanks to the sport of keijo. Any other sport, and this would have been a rather generic sports anime – however, by having the focus on a sport that involves the clashing of breasts and butts, it’s certainly unique.

The four main characters in Keijo!!!!!!!! are Nozomi Kaminashi, Sayaka Miyata, Kazane Aoba and Non Toyoguchi – these four end up in the same dorm room at Setouchi Keijo Training School.
Nozomi is a former gymnast, who possesses boundless energy as well as always being cheerful. She entered the world of keijo in order to become rich. As you might expect from a gymnast, she is very agile and uses that to her advantage when moving around the Land. Over the course of the series, she learns and develops a signature technique called the Vacuum Butt Cannon.
Sayaka also came from a sporting background, though in her case she was a judo champion before deciding to switch to keijo. She is amongst the speediest of keijo players, and is even able to work some judo into her fighting style. Impressive, considering the rules forbid use of hands during keijo matches.
Kazane is a quiet girl, simply because she is self-conscious about her Hiroshima dialect. However, her ponytail is expressive, giving her a rather unique way to communicate in team-based keijo matches and activities. Kazane is also very good at analysing the situation and her opponents, and this particular talent gives rise to arguably one of the best techniques we see in the show.
Non is a clumsy girl, who employs a counter fighting style in keijo matches. As far as development goes, Non might just get the least – it is established her soft butt is ideal for counter attacks, but she never really uses any techniques that take advantage of that fact. She doesn’t solely rely on her backside, but that ends being a fairly key point in her matches anyway.

As for the plot, Keijo!!!!!!!! can be split into roughly three parts – arrival at Setouchi Keijo Training School, a training camp and then the East-West War.
The first part introduces us to the characters, and just how exactly ridiculous keijo can be – particularly when Nozomi and her friends end up fighting girls from the Elite Class.
The training camp is a chance for the girls of Setouchi to further develop their techniques. Most of them do this off-screen, as it is Nozomi who gets the focus here.
The East-West War is a series of 4-on-4 matches between Setouchi and Suruga – rival schools who have been holding the East-West War event for a decade. Suruga has never lost a war to Setouchi in that time, and they aim to keep their streak unbroken. Of course, Setouchi are just as determined to score their first win. If you thought things were completely ridiculous before, the techniques we see here manage to transcend that.
Throughout the series, we also see some alternate styles of Land, which force the keijo players to adapt and change up their strategy depending on what they are standing on.

Due to the nature of the sport of keijo, fanservice is a given. Keijo players wear swimsuits (they are fighting over a swimming pool, after all), and a few times they end up with clothing damage.
There are also occasions where the girls may willingly choose to bare their breasts, but nothing explicit is shown on screen. The fanservice does nothing to detract from the show, mainly because it’s never really used as a focal point. Though saying that, some techniques definitely err on the side of lewd – it’s probably best not to let people hear the results of those techniques without context.
Talking of context, Keijo!!!!!!!! has so many lines that can be taken out of it so easily. The best part is, the characters say these lines completely seriously.

Keijo!!!!!!!! is not meant to be taken seriously, without a doubt. Give the show a chance, and you may find yourself actually enjoying the totally absurd sport of keijo.

Score: 9/10
There’s one word that has cropped up several times throughout this review that describes Keijo!!!!!!!! perfectly: ridiculous. Keijo is a ridiculous sport, the girls’ varied techniques are ridiculous, and most important of all, it is a lot of ridiculous fun.

I enjoy writing, manga, anime and video games, so naturally here on my blog, you will find anime reviews, Nintendo news and other such things that I deem interesting.
View all posts by Rory →
This entry was posted in Rory's Reviews and tagged Autumn 2016 Anime, Kazane Aoba, Keijo!!!!!!!!, Non Toyoguchi, Nozomi Kaminashi, Rory's Reviews, Sayaka Miyata, Sports. Bookmark the permalink.

Leave a Reply to The Otaku Judge Cancel reply