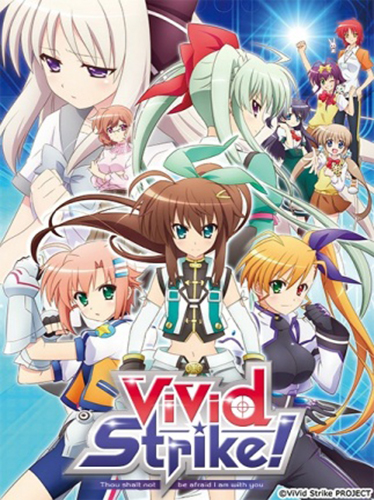 Both Fuuka and Rinne are orphans, who formed a strong bond when they lived together in an orphanage. However, when Rinne is adopted by the Berlinetta family, the two of them begin to drift apart.
Whereas Rinne ends up living a life of comfort (well, almost – more on that in a moemnt), Fuuka is a delinquent at the start of the series. A chance encounter with Einhard Stratos results in Fuuka taking up martial arts.

Whilst Rinne is taken in by a prestigious family, various factors contribute to her changing from a shy, quiet girl into someone who only seeks strength. An ill grandfather, bullies and a kidnapping attempt are some of the tribulations Rinne had to face at a young age.
At first, Rinne seems like a character that there isn’t much to like about, but as her past revealed, it become rather easy to develop sympathy for her.
Watching Rinne snap leads to an incredibly violent scene, yet it also manages to be cathartic.

There’s a fairly sizeable cast of characters, what with those who appeared in Magical Girl Lyrical Nanoha ViVid supporting Fuuka – including Vivio Takamachi and Einhard Stratos. It’s certainly an interesting cast of characters, and the aforementioned pair have quite an effect on both Fuuka and Rinne.

One of many fights featured throughout the series

Being all about martial arts, fight scenes are inevitable. Fortunately, they are really quite good; it’s just a shame that any fights involving minor characters tend to be glossed over. There are occasions when it feels like a character’s motivation is being reiterated, almost as an excuse to not animate fight scenes with minor characters.
However, when it comes to main characters fighting each other, nothing is held back. Each blow has a real sense of weight to it, and it’s never really made obvious who will win a given fight. Whilst one-sided fights can have their moments, watching two combatants work so hard to achieve victory definitely has a greater pay-off when you don’t know who will win.
The destructive power the girls have behind their punches is really quite impressive too; some of the injuries we see the cast suffer are on the extreme side of things – shattered ribs being arguably the most prominent example.

Fuuka at the end of a transformation sequence

Since this is part of the Nanoha franchise, we do get magical girl transformations – and they are in line with what you’d expect from this franchise. Basically, they tend to involve the girls’ clothing disappearing before being replaced by their Barrier Jackets, meaning you get the typical featureless anime nudity.
There are a couple of other examples of casual fanservice that doesn’t involve transformation sequences in the show, but those are only minor things and one of them is played for laughs.

The soundtrack for ViVid Strike! is really quite something. Each girl has their own unique theme for transformation, and even the battle music features high octane electric guitar that suits action scenes perfectly.

Being Fuuka and Rinne’s story, it’s only natural that they should receive development as the plot progresses. Naturally, this is exactly what happens, and their growth is certainly one of the highlights of this series. This culminates in quite an epic finale, though we are robbed of the chance to ever really see Einhard in a fight…

Score: 8/10
ViVid Strike! is a great action anime, featuring some really impressive martial arts whilst telling a rather compelling tale about the growth of its two lead characters.

Here’s a picture of Vivio, just because

I enjoy writing, manga, anime and video games, so naturally here on my blog, you will find anime reviews, Nintendo news and other such things that I deem interesting.
View all posts by Rory →
This entry was posted in Rory's Reviews and tagged Autumn 2016 Anime, Fuuka Reventon, magical girl, martial arts, Rinne Berlinetta, Rory's Reviews, ViVid Strike!. Bookmark the permalink.