This will be the penultimate post for my Wii U Game of the Month – with the Nintendo Switch on the horizon, the Wii U’s lifespan has come to an end. I might look back on it before the Switch is released, but for now I’ll be focusing on the Wii U’s games.
The game I’ll be featuring this month is one that was born from a successful Kickstarter campaign – it surpassed its target of £3000, raising £4018 in total.
The developer for this game is fairly active on its Miiverse community, responding to feedback and sorting out updates.
Oh, and this game is also a Wii U exclusive.

Twisted Fusion focuses on a girl called Cora (the redhead) and her two friends, who are transported into a mysterious world called Evan. The only things they can rely on to survive are their wits and water guns. The water guns prove to be invaluable when it comes to fighting enemies, and they never run out of water either.

This game is an open-world platformer; once you’re warped into the world of Evan, you’re free to start exploring however you want. However, there are a few obstacles that may prove to be insurmountable at first.
As you defeat enemies and find treasure chests, you can collect money which can be used to spend on new abilities for Cora and her friends. One of these includes a jetpack, which is where the world properly opens up for exploration.
Other abilities you can purchase include special abilities – just purchasing that once allows all your unlocked characters to use a unique ability. You can also increase attack and defence, as well as jump height amongst others.

You don’t have to play the game alone, either. Providing you have enough people and controllers, up to five people can play at the same time. You start off with six different characters to choose from, and can unlock more as you play the game. You can also acquire different costumes for Cora.

Cora’s water gun isn’t the only item she has with her in the world of Evan. When she warped into Evan, her smartphone adapted to the new environment and downloaded several new apps which have various functions.
The game has day/night and weather cycles – these things can affect the monsters you encounter. You can use the smartphone’s Clock app to change the time, which can be useful when you’re searching for a specific monster type for a quest. The Weather app lets you know the current weather and how it will change.
Throughout Evan are goddess statues, that heal you when you pass by them. They also act as warp points, which can be accessed through the phone’s GPS app.
The Loot Store is the app where you buy the new abilities from.
There’s also the Difficulty Slider, which goes from 1 to 9. 1 is the easiest difficulty, whilst 9 is the hardest. The higher the difficulty, the stronger, tougher and smarter the enemies. However, higher difficulty also means more loot.
Players & Characters is where you go if you want to change your character or the number of players. You can also unlock other characters through here by using Sacred Orbs.

The Tasks app allows you to keep track of your progress through the game. The are different quests to complete, treasure chests to open and Go Gos to save amongst many other things.
Go Gos are sentient eyeball creatures, who you may often find trapped in a slime monster. By freeing them, you gain Sacred Orbs which are used to unlock new characters and costumes. 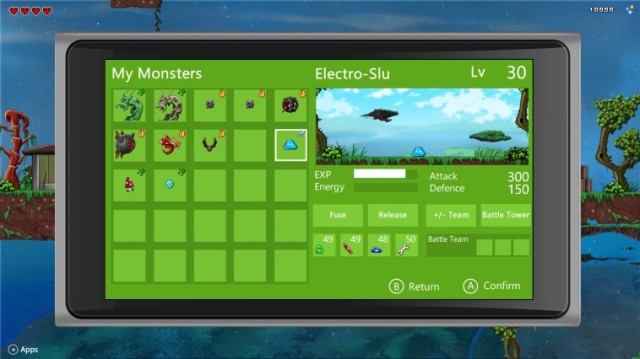 The My Monsters app

Another feature of Twisted Fusion is monster raising. By going into the My Monsters app, you can hatch monster eggs you pick up during gameplay. You can then give the monster items to make them grow, as well as fuse them with other monsters.
You can then have your monsters battle in the Battle Towers, and gain rewards from that.

Twisted Fusion does have a few flaws, and as a result I’ve seen mixed reviews about it. Fortunately, I’ve never been one to be swayed by other people, so I decided to try this game out for myself and I’ve quite enjoyed what I’ve played so far.
Whenever you start the game up, it takes quite a while to load. There are also loading screens for transitions between areas within the game, but those aren’t too bad.
There’s been a couple of times I’ve gone into a new area and ended up stuck inside a wall, but using the GPS app meant I could easily warp out of that predicament.
Character’s jumps are floaty, but that doesn’t really bother me too much. That’s pretty much rendered meaningless when you get the jetpack, though.

This is probably the closest we’ll ever get to seeing Reimu Hakurei in a Wii U game.

On the positive side, I really like the game’s art style and soundtrack. There’s also plenty of exploration to do, as well as loads of quests to tackle. The monster raising makes for an interesting distraction, too.
At only £4.00 on the Wii U eShop, I can happily see past the flaws this game has. There’ll be updates in the future as well, so it seems as if things will only improve.

I enjoy writing, manga, anime and video games, so naturally here on my blog, you will find anime reviews, Nintendo news and other such things that I deem interesting.
View all posts by Rory →
This entry was posted in Games of the Month and tagged Action, Adventure, eShop, Leuvsion, Nintendo, Platformer, RPG, Twisted Fusion, Wii U. Bookmark the permalink.