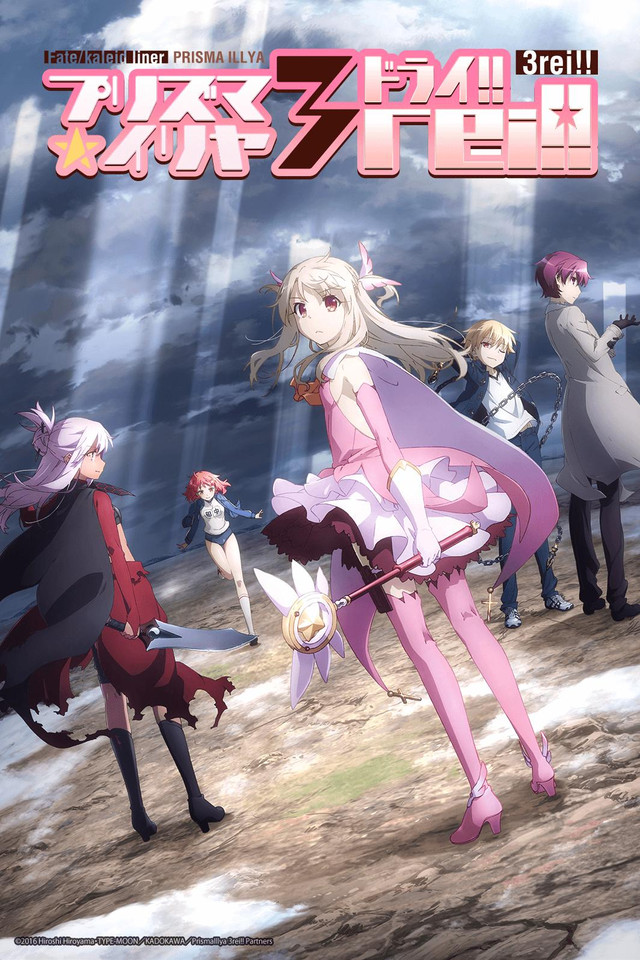 Fate/kaleid liner PRISMA ILLYA 3rei!! is an animated adaptation of the Fate/kaleid liner PRISMA ILLYA 3rei!! manga written by Hiroshi Hiroyama. The directors for this anime were Shin Ōnuma, Masato Jinbo and Ken Takahashi, whilst it was written by Kenji Inoue and Hazuki Minase. The studio that produced it was Silver Link, and unlike the previous seasons it consists of twelve episodes.

All of the above, and this season being reviewed here, are available to watch on Crunchyroll.

When show get multiple seasons, it often becomes a little difficult to talk about them without repeating some things. For example, Illyasviel still serves as the main character in Fate/kaleid liner PRISMA ILLYA 3rei!!, which shouldn’t come as a surprise due to her name being in it. As such, this review will be focusing on the content of 3rei!! – check out the reviews for the previous seasons above for more information on them.

First, however, 3rei!! actually has a plot that runs throughout the episodes, unlike a large chunk of both 2wei! and 2wei Herz!.
Things kick off when Miyu is kidnapped by a mysterious group of people, which naturally leads Illya, Kuro and a few other allies to pursue them into a different world.
Things quickly go pear-shaped, as Illya almost immediately finds herself alone. It is then that she meets a new ally: Tanaka.

Though Tanaka is an amnesiac, she is always full of energy and cheerful. Being quite a silly character results in her providing a fair amount of comic relief; falling asleep when she doesn’t understand something being explained serving as an example. She also favours wearing gym clothes for some reason. There are a few episodes where she has very little to no appearances, and she is still something of an enigma by the end of the series.

A new group of antagonists are introduced for 3rei!!. They are the Ainsworths.

Beatrice Flowerchild and Angelica Ainsworth are the first of the enemies to make themselves known, using Class Cards in a very familiar manner. Being the Ainsworths’ main fighters results in these two participating in the majority of the action scenes.

There’s a whole host of action going on this time around; Illya’s fight to save Miyu has her clashing with the Ainsworths several times over the course of the series, and not always in her default magical girl form. One particular treat of the increase in battles means seeing more Class Cards Installed; that is, Illya taking on various forms of the heroic spirits. Naturally Saber gets most screentime, but others do get used.
Of course, the action scenes are just as great as they were in the earlier seasons, and the fact there are more of them helps make this season stand closer to the first one.

Though there is an actual plot and battles to be fought, 3rei!! does find the time to squeeze in a couple of kiss scenes between Illya and a couple of her female allies – once again, it will vary from viewer to viewer on whether these hold any appeal or not. They can be quite… intense.

To get back on track, the Ainsworths’ goals are something that challenges Illya’s principles. Whilst certain other characters already know what they want, Illya channels a typical magical girl in her doubts and resolve – which makes sense, considering her flight ability as a magical girl arose simply because she believes magical girls should be able to fly.
A conflict does arise within Illya due to this, but her interactions with other characters help her to approach that issue and ultimately make a decision truly befitting of a magical girl.

Whilst 3rei!! is pretty great throughout, its finale felt a little lacking. A familiar face joins the battlefield, but the anime didn’t quite seem to capture the impact of that event – perhaps because that particular episode suffered production issues.
The ending also comes out of nowhere, and leaves unanswered questions. However, regarding that:

A film will follow up this season. Hopefully it will provide some answers to those questions that were left at the end of 3rei!!.

When it comes down to it, Fate/kaleid liner PRISMA ILLYA 3rei!! arguably stands as an equal to the first season. Whilst the greater slice-of-life focus in 2wei! and 2wei Herz! was by no means bad, the first season introduced an action-packed magical girl anime that they didn’t quite recreate. 3rei!!, however, managed to replicate that.

Score: 8/10
Fate/kaleid liner PRISMA ILLYA 3rei!! is a return to form for the Fate series’ magical girl spin-off, proving that it can recreate the thrills of the first season. The ending may be a little too open, but it’s entirely possible the film could remedy that.