Naturally, things begin with Mirai, Riko and Mofurun together. It doesn’t take too long for Mirai to burst into song. The Princess Cures also join in on the song, and we get the traditional meeting between the current Cures and their immediate predecessors.
Soon after that, an enemy appears before them. It’s not just any enemy, either; it’s one who caused the Princess Cures to suffer the most despair.

During this sequence, the antagonists for the film are introduced.

Sorcielle the Witch (I’ve seen the spelling of her name vary, but I’m just going with the subs in this case)

We learn of Sorcielle and Trauma’s ambition through a pretty rocking song they perform, complete with PreCure puppets. Anyway, the whole idea is to gather the tears of the PreCure, to complete ‘catastrophic magic’.

After the initial meeting between the new and previous Cures, they get pulled into an alternate dimension and separated from each other. From this point on, it’s pretty much a mixture of battles and singing.
The foes the Cures have to fight in this film are ones conjured up from their memories; almost all of the final bosses from their respective series.
It’s nice to see the Cures actually fight enemies that prove a threat, even if it does seem like those enemies don’t quite possess the same power as they did during their climactic battles – which stands to reason, considering they are pulled from the Cures’ memories, and not the actual enemies themselves.

Oh, and the yuri between Mirai and Riko is as strong here as it is in Maho Girls PreCure!. Like, I could call it subtext, but I think we’re past that point by now. When separated, they both sing a song which can easily be interpreted as them pining to be with each other.

Being a Pretty Cure All Stars film means that there’s also some big damn heroes moments. Mana’s harem- er, I mean the DokiDoki! Cures rush to the aid of Cure Magical, whilst Miracle is helped by a group consisting of pink, blue, yellow and purple Cures. I got my hopes only to have them crushed to discover it was the HappinessCharge Cures, rather than the far superior HeartCatch Cures…

I was expecting HeartCatch and ended up with HappinessCharge… urgh.

The combat scenes are as enjoyable as ever – they retain the the hard-hitting physical combat, and special moves are used without stock footage so the flow is never really broken – well, at least until towards the end, but that’s pretty much what you’d expect from Pretty Cure. Oh, and Cure Echo also shows up, and she er… that’s about it, actually.

Cure Echo doesn’t really do much.

Miracle and Magical get the honour of facing the antagonists on their own – you know, the most inexperienced Cures… during that sequence we learn of their motivations and histories.

I think the song that is sung during the final confrontation is pretty good as well, and of course the climactic battle is as good as you’d expect from PreCure. 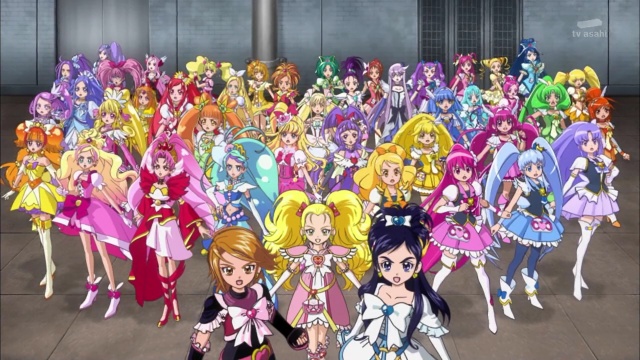 44 Cures participate in the final battle – which was all of them when this film first came out.

Pretty Cure All Stars: Singing With Everyone♪ Miraculous Magic! is definitely a lot better than it’s predecessor, Spring Carnival♪. It actually has a proper plot beyond some excuse to gather the Cures (though I guess ultimately that’s all these All Stars films are), the songs actually go well with everything else and the enemies the Cures fight pose a credible threat.
I would definitely say I’m also a fan of Sorcielle.

One eternal disappointment I suspect I’m going to have with Pretty Cure All Stars is the fact that that certain major characters from particular series (DokiDoki and Splash Star in particular) don’t get to appear alongside their allies. Though saying that, it’s gotten to the point where only a select few Cures actually get any lines at all…

Some of the stuff that happens definitely feels pretty familiar, particularly when compared to the other Pretty Cure All Stars films. There’s also the part where Mirai and Riko get uncharacteristically depressed – something of a recurring problem throughout the All Stars films, which air at the beginning of each season of PreCure…
Would also still be nice to see Cure Echo actively participate in combat – even if it’s only throwing a single punch, it would be more than we saw her doing in this film.

Going back to the positives, Sapphire Style makes an appearance.

Only a brief one, but at least it made it in, unlike Ruby Style which was shown in a trailer but nowhere to be seen in the actual film. For the most part, they use Diamond Style.
The soundtrack is great – we get the Go! Princess PreCure and Mahgo Girls PreCure! opening themes, but everything else is pretty much original – and I’d have to say that Sorcielle and Trauma’s song is my favourite of the bunch, though the song that plays a key role in the plot is pretty good too.

Pretty Cure All Stars: Singing With Everyone♪ Miraculous Magic! is definitely a pretty good film as far as the series goes, though I don’t think anything will ever quite recapture the impact I felt from the first All Stars film.
That’s just my personal opinion, though. Maybe this film is your favourite entry in the All Stars series, or perhaps it wasn’t quite your cup of tea.
Feel free to share your own opinions of this film in the comments.