Thoughts on Akuma no Riddle: Riddle Story of Devil Volume 3

I will now finally get around to talking about the third volume of Akuma no Riddle, which I picked up a fair few weeks ago – I was just focusing on other manga series at the time.
Since it’s been a little while, I’ll provide a brief summary of the overall plot here: a class of thirteen students is formed at an all-girls’ school, where twelve of the girls are assassins, and the thirteenth student is their target. However, one of the assassins decides to protect the target instead of assassinating her.
That’s a fairly simple outline, check out my previous posts on this manga series for more details.
Back to the third volume, and this one is all about the preparations and performance of a school play.
This volume contains chapter eighteen to twenty-six. 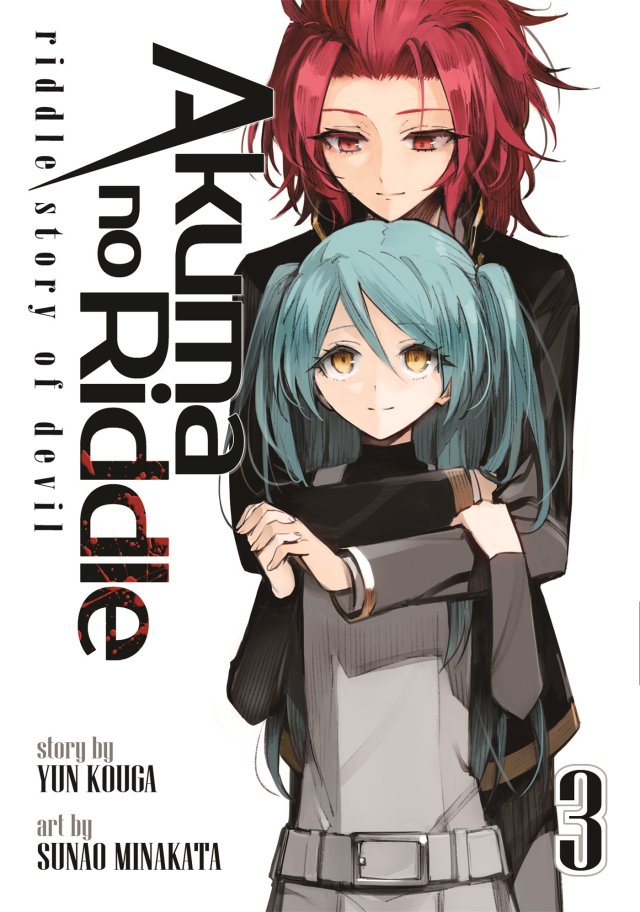 To be or not to be… assassinated!
So far, Haru Ichinose has managed to survive. Tokaku Azuma has continued to act as her loyal guardian, having thwarted several assassination attempts on the girl’s life. This means Haru has lasted long enough to take part in the school play, along with her assassin classmates.
Working on the play will bring all the girls closer, for better or worse. Secrets will be revealed, lines will be crossed, and the stakes against Haru’s life will be higher than ever. How can Haru possibly survive this latest theatre of war?

I’m sure you’ve guessed this, but that was the blurb. Right at the beginning of this volume we have a few colour pages, each one featuring two girls from Class Black. In order, the colour art features Haru & Tokaku; Hitsugi & Chitaru; Haru & Tokaku again; Isuke & Haruki; Hitsugi & Chitaru again; Otoya & Shiena; Haru & Hitsugi and finally Suzu and Kouko.

Chapter 18 is called ‘Trumpets of Benediction’. Chitaru joins Tokaku on her morning exercise routine, and she reveals that Haru is not her target, but an assassin called ‘Angel Trumpet’.
Haru and Hitsugi join Tokaku and Chitaru for breakfast.

‘Precious Thing’ is the title of chapter 19. During a discussion between Isuke and Haruki we learn the latter’s motivation – her family, which is quite extensive.
As Tokaku and Haru use the bath, Haruki joins them. She talks with them, and Haru remains determined to live on.
This chapter ends with Tokaku receiving a new riddle.

Chapter 20 is ‘Caged Bird’, and we get to see a bit of Tokaku’s past. We also see that Tokaku is popular with the girls outside of Class Black who look forward to seeing their play.
Haruki sets up a meeting between herself and Tokaku for that night. We also learn what she desires as a reward for assassinating Haru.

Chapter 21, ‘Baby Pink I Had Always Wanted’, focuses on Haruki. The title refers to nail polish that she brought with her reward for killing her first person.
Turns out the meeting Haruki scheduled was just a ruse, and she confronts Haru when she’s alone.
Of course, it doesn’t take long for Tokaku to arrive on the scene and overwhelm Haruki. She tries one final trump card, and the confrontation is brought to a close.

In chapter 22, ‘Hunter and Hunted’, dress rehearsals for Romeo and Juliet begin. Shiena approaches Nio about her reward. A brief flashback shows that Shiena was the victim of bullying, but she stumbled upon a group that could help her – by taking revenge upon the bullies. In return, she’d need to take revenge for someone else.

The title of chapter 23 is ‘Unforgivable’, in which Hitsugi contacts Nio and discusses her reward.
As Shiena prepares to make her assassination attempt, Hitsugi appears before her…

‘Don’t Worry’ is the title of chapter 24. Tokaku tries to get information on Chitaru.
Hitsugi and Chitaru discuss Angel Trumpet. Hitsugi says she will make sure that Chitaru kills Angel Trumpet, before confessing to her.

Chapter 25 is ‘Justice or Love’, and it is here where we get to see Class Black’s performance of Romeo and Juliet. This chapter starts with some shipping material between Sumireko and Mahiru.
It is during this chapter that Chitaru learns Angel Trumpet’s true identity. Of course, the chapter ends with the conclusion of the play.

In chapter 26, it’s time for a ‘Water Game’. It is here where Suzu makes her assassination attempt – she goes for a game as she doesn’t do brute force. With an explosive collar locked around Haru’s neck, Tokaku has to search for the combination to release it.
They also only have three chances to enter the correct combination – getting it wrong means that the collar explodes. This chapter ends with Tokaku entering an incorrect code, leaving only two more chances.

Shiena didn’t really get a chance to do much in this volume due to reasons, but I suppose we did learn a little more about her motivation. The main focus of this volume is the play and it presents some interesting interactions between the characters – in particular they almost seem like a normal class of students during rehearsals.
Another thing I quite enjoyed from this volume was the interactions between Mahiru and Sumireko.
The assassination attempt started at the end of this volume makes a nice change of pace from a direct confrontation, so the next volume should be fairly interesting.

I enjoy writing, manga, anime and video games, so naturally here on my blog, you will find anime reviews, Nintendo news and other such things that I deem interesting.
View all posts by Rory →
This entry was posted in Nintendo News and tagged Action, Akuma no Riddle, Manga, psychological thriller, Riddle Story of Devil, Sunao Minakata, suspense, Volume 3, Yun Kouga. Bookmark the permalink.