Thoughts on Soul Eater NOT! Volume 4 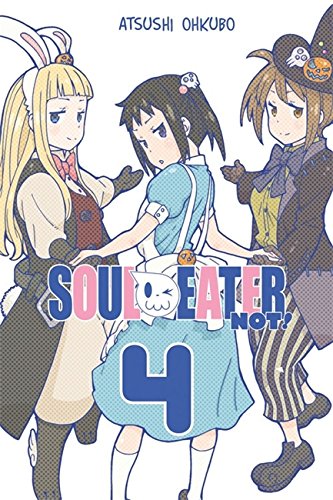 Tsugumi Harudori is in love with life at DWMA, but she still hasn’t made a decision on whether to take Meme or Anya as her new meister. Anya has delivered an ultimatum: Tsugumi must make her choice by Halloween – and the clock is ticking! Can Tsugumi make up her mind in time, and without hurting one of her friends? It’s a savage but super-fun life!

With the blurb done, let’s start with chapter 21, ‘First Day!’. First up is a class where the students learn more about weapons, then a PE class. The chapter ends with Tsugumi getting something to eat at the café.

‘Soul Eater JOT! 7’ features Jacqueline studying up on witches, Kim turning into a tanuki and finally Kim telling Jacqueline that she is the only one for her.

In chapter 22, ‘Tropical Night!’, the subject of Shaula Gorgon comes up once more – she hasn’t been seen since the incident with Eternal Feather.
A hot night makes it a struggle for Tsugumi to get to sleep, whilst Meme strips off in her sleep and gets personal with Tsugumi.
Anya puts a stop to it, and takes the opportunity to spar against Meme’s ‘sleep fist’.
Tsugumi brings that to a halt, and ends up in bed together with both Meme and Anya. The two of them fall asleep, but Tsugumi isn’t able to do so due to the warmth of their bodies.

In ‘Soul Eater JOT! 8’ we’re shown Death City is a whole mixture of cultures, Kana uses cards for everything, a child loses a balloon and Anya cooks for Tsugumi and Meme.

‘Blade!’ is the title of chapter 23, in which the development of the weapons in the NOT class is evaluated. Maka and Soul observe the class, which makes Tsugumi nervous.
The different weapons show their progress, and eventually it comes round to Tsugumi’s turn. Whilst Tsugumi is able to fully transform, she lacks a blade.
After the class, Tsugumi is determined to put a proper edge on her blade.
Meme and Anya see her training, and it is here that Anya tells Tsugumi she needs to choose one of them to be her partner by Halloween.

‘Soul Eater JOT! 9’ shows us that you should be wary of what you touch, Anya gives some advice to fellow students, Ox tries to impress Kim and Tsugumi wants to properly control her weapon powers.

In chapter 24, ‘Nursing!’, Tsugumi comes down with a fever. Meme and Anya both attend to her. When Kim and Jacqueline go for a visit, they see that they’re not needed – Kim also admits to not being alone any more, which gets quite the reaction from Jacqueline.

Following on from that is ‘Soul Eater JOT! 10’. Clay acts foolish so he doesn’t blow his cover, then he tries to pull one over on Akane, we learn Eternal Feather’s real name, Tsugumi, Meme and Anya discuss trick-or-treating and Clay uses Tsugumi to play a prank on Akane.

Chapter 25, ‘Preparations!’ begins with a flashback to three months prior, when Tsugumi, Meme and Anya started to grow some pumpkins.
In the present day, the pumpkins are fully grown and ready to be made into Jack-o’-lanterns.
The girls aren’t the only ones preparing for Halloween – there will be a battle festival and the rest of Death City is getting in the mood for it. Of course, event he café is getting in on the Halloween spirit too.
Progress in the Shaula Gorgon case is made, with the discovery of a list of meisters and weapons that had been stolen from the DWMA.
Whilst Tsugumi, Meme and Anya carve their pumpkins together, Tsugumi is concerned about the choice she will inevitably have to make.
Maka and Soul decide to enter the battle festival in order to serve as an example to the NOT students.
Many people dress up as a witches for Halloween, making it the perfect place for a real one to hide in plain sight…
As preparations continue on, Tsugumi receives a letter containing bad news. This sends her into depression, which causes her to snap at Meme when she forgets yet another thing.

That’s volume 4, which mostly deals with Tsugumi’s dilemma: who to choose as a partner.
Not much else really happens, at least until a certain witch’s reappearance and the ending, which is a fairly dramatic moment for what has mostly been a slice-of-life series.
Learning a little more about weapons towards the beginning was pretty great, too – I really enjoy those things that expand upon the lore of a series.

Next time, Soul Eater NOT! reaches its conclusion. What will happen at the battle festival, and who will Tsugumi ultimately choose to be her partner?
Guess we’ll find out when I take a look at the final volume of the manga next time – or you could read it yourself, or watch the anime.

I enjoy writing, manga, anime and video games, so naturally here on my blog, you will find anime reviews, Nintendo news and other such things that I deem interesting.
View all posts by Rory →
This entry was posted in Manga and tagged Atsushi Ohkubo, Comedy, Manga, slice-of-life, Soul Eater Not!, supernatural, Volume 4. Bookmark the permalink.

1 Response to Thoughts on Soul Eater NOT! Volume 4