If you’ve read my previous episodic posts for Maho Girls PreCure!, you’ll know that this episode is a milestone for the franchise. What exactly is that milestone?
12 years, 13 seasons, 11 different continuities, 20 films, 44 Cures (well, technically a lot more if you count legendary, past and international Cures) and 600 episodes.
600 episodes, and I have watched every. Single. One. There were ups and downs – fortunately, the good outweighs the bad by a fair margin.
Anyway, which character was fortunate enough to have the prestige of being the star of episode 600?

Haa gets the spotlight this week

This episode starts with everyone waking up and preparing for school, whilst Haa wants some food. Unfortunately, Mirai’s too busy getting dressed, Riko’s doing homework and Mofurun is sleeping. Haa takes matters into her own hands.

She then proceeds to eat all of this food

Turns out that there’s a consequence to eating so much food in a single sitting. She gets magical hiccups that can change her form. 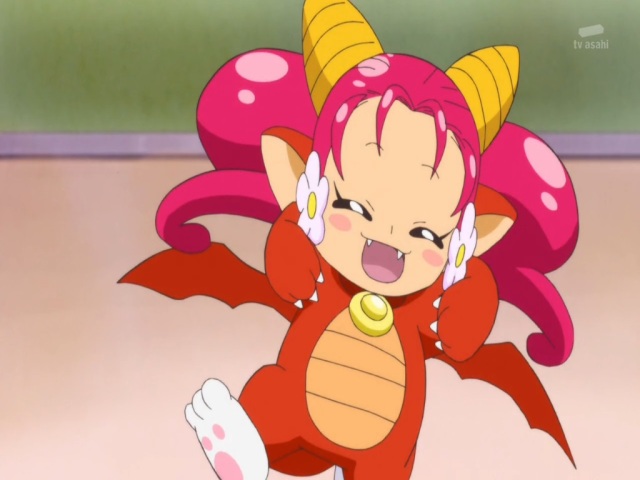 Anyway, Haa decides to fly off, leaving Mirai and Riko to look for her on their way to school. Turns out that is where Haa has actually gone, and who’s the first to see her? 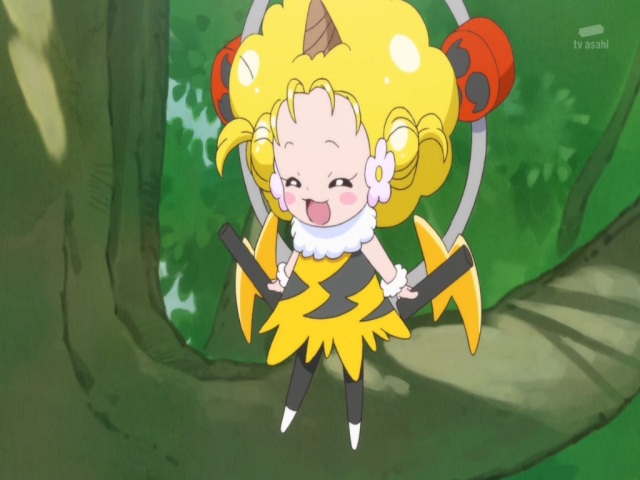 Haa flies off again before Mirai and Riko can do anything. In class, Mirai and Riko are too concerned about Haa to concentrate. Meanwhile, Haa’s getting into some mischief of her own. 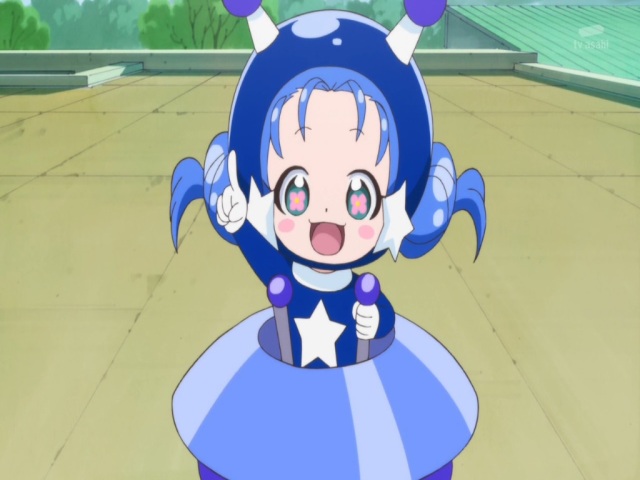 Haa’s mischief is noticed by many students at the school, but we’ll get to that later. Anyway, Mirai and Riko have to go back to class, so Mofurun looks for her. 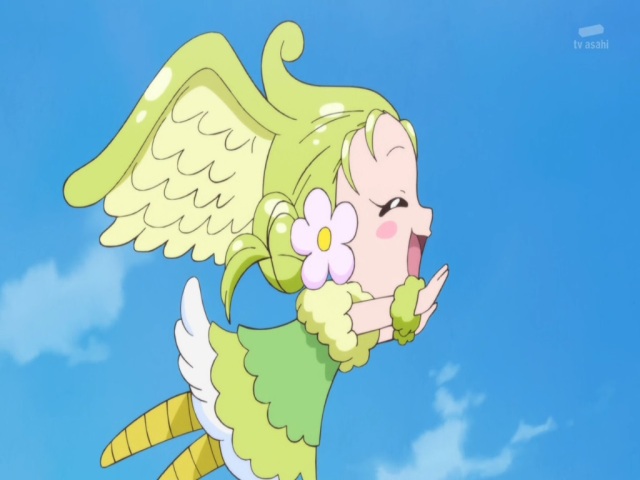 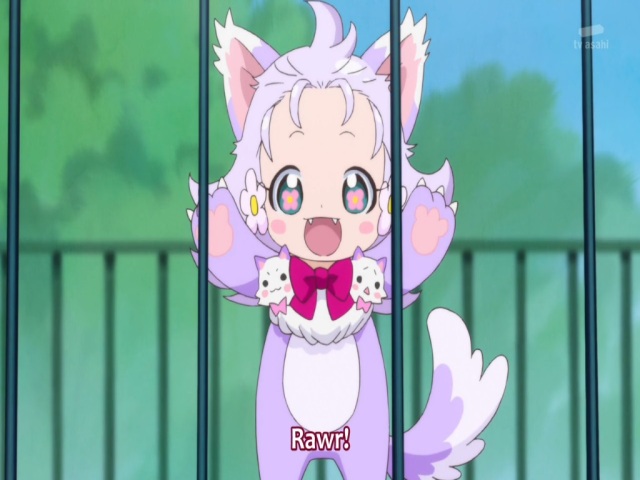 I’d like to say I managed to keep it together during this episode, but then this happened…

Mofurun is unsuccessful in locating Haa, even getting trampled by a flock of chickens. Class finishes, and Haa catches the attention of perhaps the entire school.

Mermaid Haa – remember, an earlier episode established that flying mermaids used to be a perfectly normal thing in the Magic World. 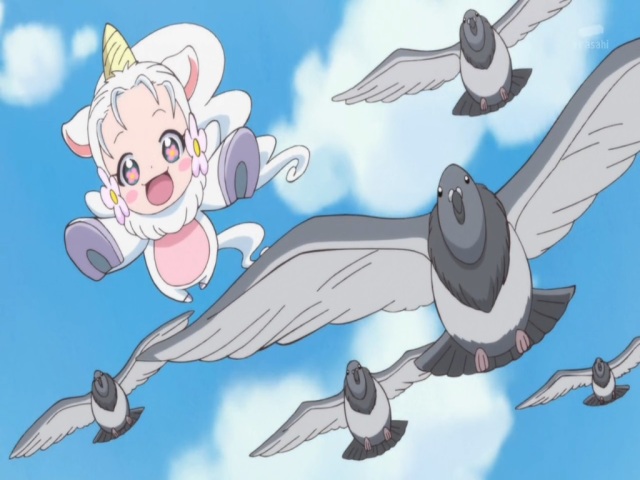 So the school starts talking about the mysterious fairies, and Katsuki insists its something to do with the witches she’s seen before. Whilst this is happening, Haa flies out of the school grounds.

Mirai, Riko and Mofurun go out to look for Haa and we get this:

I’ve made the ‘two mamas’ reference before, but well…

OK, so this has confused me a bit. I’m sure someone will explain it. All I can guess is that Mofurun is included in this – the Pretty Cure wikia lists Mofurun’s gender as ‘unknown’, whilst TV Tropes has Mofurun as male. I know Japanese is better at being ambiguous when it comes to gender, and that doesn’t really translate well into English – it’s pretty much the same situation as with Crona from Soul Eater.

Anyway, Haa ends up in Sparda’s clutches but it doesn’t take long for Mirai and Riko to find them. Naturally, they aren’t able to get Haa back without a fight.

Time for some Topaz Style Cures

Sapphire Style is my favourite, but I would say that Topaz is the ‘sweetest’. Jokes aside, the fight against the Yokubarl is pretty fun to watch, but it doesn’t quite match up to the first Topaz Style fight – there was a bit more variety in their attacks there.

The Cures rescue Haa during the battle, and we get this cute moment in an episode that has been full of them

Anyway, the Cures defeat the Yokubarl and Sparda retreats. Back at their base, Sparda reports her defeat to Yamoh. Yamoh implies that Dokurokushe won’t hesitate to destroy those who are useless – this makes me wonder if the current villains are going to last through the entire season. That hasn’t always been the case – in the first few seasons, there was generally two different groups of villains working under the big bad. I’ll guess we’ll just have to wait and see. Oh, and Yamoh also shows an interest in the Linkle Smartome.

After that, Haa is reunited with everyone else and there is much apologising. It all ends on a happy note, though.

Mofurun says that Haa probably transformed due to a build-up of magic power from eating so much, and that’s probably correct. I do wonder if Haa might be able to utilise that sometime in the future, though. Back at school, everyone talks about fairies spreading happiness around the school.

Let’s all just take a moment to appreciate that Haa is in Riko’s pocket.

Thus ends the episode, and I have to say that it was a very good one. I loved seeing Haa in the spotlight, and her different transformations were very cute – I’m sure you can easily work it out, but why not try guessing my favourite? This 600th episode was certainly a memorable one, and very worthy celebration of that milestone.