With this volume of Soul Eater, the DWMA’s infiltration of Baba Yaga Castle is in full swing. However, for one person and his weapon partner, ‘stealth’ isn’t part of his vocabulary…
There are four chapters in this volume, starting with number forty-nine and ending with number fifty-two. 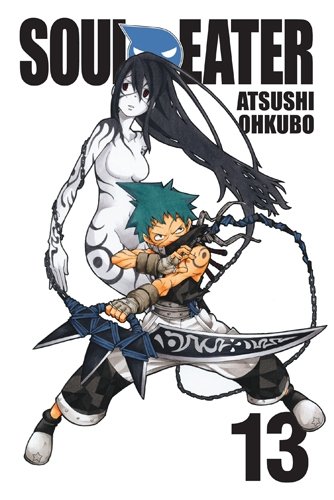 Starting with the blurb, as usual:
As Maka and a team of DWMA students slip into Baba Yaga Castle in the guise of Arachnophobian guards, Black☆Star opts for his usual style of entrance: loud and without a trace of subtlety! But although Black☆Star doesn’t seem to have changed much on the outside, inwardly he as at last found a way to harness the true power of the Uncanny Sword. Will Black☆Star’s transformation be enough? Or will he once again find himself at the mercy of the great swordsman Mifune?

‘Operation Capture Baba Yaga Castle (Part 5)’ is the title of chapter 50. Black☆Star and Tsubaki get to show off some new techniques against Mifune.
The DWMA students inside Baba Yaga Castle carry out their mission. Maka and Soul continue to follow Medusa, whilst Harvar fights Kim and Jackie in order to protect the injured Ox.

Chapter 51, ‘Operation Capture Baba Yaga Castle (Part 6)’ continues directly from the previous chapter, with Ox and Harvar taking on Kim and Jackie. Well, it takes Ox a little while to get on board with the idea, but he does so eventually.
We also see Kid’s progress in the eighth tower, where he encounters Mosquito. Free also shows up, despite the fact he should be in the second tower…

The last chapter of this volume is number 52, called ‘Operation Capture Baba Yaga Castle (Part 7)’, focuses on Kid and Free fighting against Mosquito.
We get to see Eibon, and then the chapter ends with Mosquito taking on his form from 400 years prior and bringing his fight to a swift end… well, at least for this volume.

Whereas the beginning of the stuff in Baba Yaga Castle was all about subterfuge as the students infiltrated the castle, this is where the action starts to pick up – which should be expected, considering the fact that Black☆Star shows up.
Talking of Black☆Star, its neat to see the growth he has undergone and the new abilities he’s been granted because of it.
As ever, another enjoyable volume – particularly because this one features a lot of action, which is arguably one of the best things about Soul Eater. That action looks set to continue, if the preview of volume 14 is anything to go by…

I enjoy writing, manga, anime and video games, so naturally here on my blog, you will find anime reviews, Nintendo news and other such things that I deem interesting.
View all posts by Rory →
This entry was posted in Manga and tagged Action, Adventure, Atsushi Ohkubo, Manga, Soul Eater, supernatural, Volume 13. Bookmark the permalink.