Thoughts on Pretty Cure All Stars New Stage: Friends of the Future

Pretty Cure All Stars New Stage: Friends of the Future is the fourth feature-length film of the Pretty Cure All Stars series. This is actually something of a continuity reboot of All Stars.
This film was originally released on March 17th 2012, during which time Smile PreCure! was airing. Cure Muse and all of the Smile Cures make their All Stars debut here.
The director for this film was Shimizu Junji, and the screenplay by Yoshimi Narita. The opening theme for this film is “Pretty Cure ~Eternal Friends~” by Maya Kudou and the ending theme is “Yay! Yay! Yay!” by Hitomi Yoshida – which is also the first ending theme for Smile PreCure!. 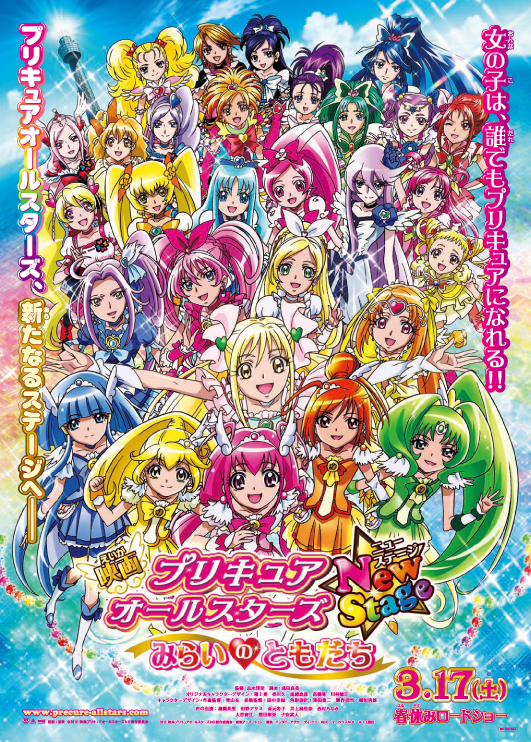 This film opens with the Cures from Max Heart up to Suite coming together to defeat Fusion, who has taken on a form not too dissimilar from Godzilla.

This film starts with 23 Cures and ends with 29…

However, despite this being a Pretty Cure All Stars film, this isn’t the Cures’ story. No, instead we get an original generation character named Ayumi Sakagami – the plot of this film focuses on her. 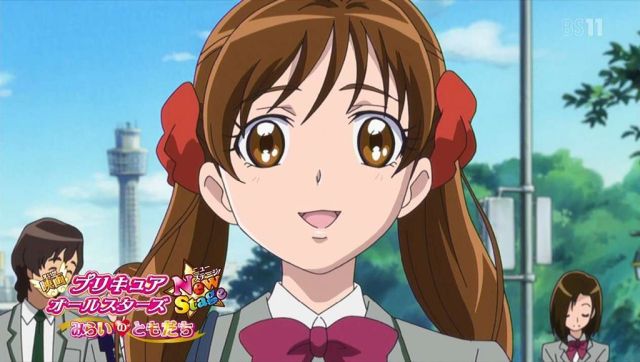 Ayumi starts out as a shy girl. Having only recently moved to a new town, she finds herself struggling to fit in and adjust to her new life. She also happens to be a fan of PreCure, wishing she could be one herself.

Anyway, during the course of the film she discovers one of the fragments of Fusion and names it ‘Fu’. Completely unaware of Fu’s origin, she befriends the fragment.

Elsewhere, the fairies from Fresh, HeartCatch, Suite and Smile discover a fragment of Fusion. Naturally, they inform the Cures of this.
For the majority of this film, the only Cures that appear are those from Suite and Smile. Naturally, Ayumi also happens to meet them in their civilian forms.

A fateful encounter between Miyuki and Ayumi

Ayumi also ends up bumping into Hibiki as well. Miyuki and Hibiki both end up chasing her, and we end up with the running gag of the current and previous lead Cures bumping into each other.

Shortly after parting ways, fragments of Fusion show up. The Suite and Smile Cures all meet up and transform in order to fight Fusion. They retain their respective transformation themes, though their tactics for fighting Fusion only serve to empower it… you’d think the Suite Cures would know better, huh?

Anyway, attention shifts back to Ayumi who ends up throwing a tantrum and wishing that her mother and the city didn’t exist. Fu takes this literally and starts devouring things, including Ayumi’s mother. After all, Ayumi did tell him that he needs to eat to grow big and strong…

Ayumi ends up meeting Miyuki and the other Smile Cures again, and Fu actively attacks the Cures. The Suite and Smile Cures go to attack Fu, but Ayumi stops them. The Cures explain that Fu came from Fusion, and he needs to be stopped before it makes the whole city disappear.

Things take a turn for the worse with the fragments of Fusion actively attacking Ayumi, but the HeartCatch and Fresh Cures show up, as do their fairies. Again, they get to keep their transformation themes. The Smile Cures try to get Ayumi closer to Fu so she can convince him to stop, whilst the others fight the fragments of Fusion.

This is the point where all other PreCure teams show up as well – they get no dialogue whatsoever, though the insert song “Friends” by Aya Ikeda does kick in with their arrival. Their only role for this part is to play big damn heroes.

As Ayumi gets closer to Fu, she ends up engulfed in one of Fusion’s fragments. However, her desire to help Fu brings forth a new power and the number of Cures increases by one.

As you can imagine, things move towards the climax from there. As far as finales go, this one is actually somewhat subdued compared to the stuff from the previous films – it only involves the Smile Cures, despite all Cures being present.

So basically, this film is Ayumi’s story, with the other PreCure thrown in for good measure. Whilst I do like Ayumi’s character, I feel that the focus on her detracts from the whole premise of what an All Stars film is supposed to be. A story like this could have easily been done within a single continuity. Cure Echo doesn’t exactly contribute a whole lot here, either – she does one thing before reverting back to Ayumi, and that thing isn’t even that impressive…
At least in the DX trilogy, all of the Cures got lines… though considering how absurdly big that number is starting to become, I guess it shouldn’t really come as a surprise.
Regardless, the action’s still great – the first fight against Fusion and the big damn heroes moments probably being the highlights. The music retains its quality as well, so that’s more points in favour of this film.

I have to say, I did quite enjoy this film. Introducing a film-only Cure was an interesting idea, and I suppose the greater focus on the Suite and Smile teams is probably welcomed by their respective fans.
I am quite curious to see what other people think about Ayumi – if you have an opinion on her, feel free to share it here.

Next time, the New Stage trilogy continues, and it is where Cures from my favourite series make their All Stars debut.