Thoughts on Pretty Cure All Stars DX2: Light of Hope☆Protect the Rainbow Jewel!

Continuing to look at Pretty Cure All Stars, up next is the second feature length film, Pretty Cure All Stars DX2: Light of Hope☆Protect the Rainbow Jewel.
This film originally aired on March 20th 2010, whilst HeartCatch PreCure! was airing. Naturally, this means that it features Cures from HeartCatch, though only the first two – Cure Blossom and Cure Marine. This is also Cure Passion’s first appearance in a Pretty Cure All Stars film.
Just like the previous instalment, Takashi Otsuka was the director for this one, whilst the writer was Isao Murayama.
The opening theme for this film is “Twinkle Cute! PreCure All Together♪ ~The Light of Hope~” performed by Aya Ikeda, whilst the ending theme is a medley of opening themes called “17 Jewels ~PreCure Medley 2010~”. This is performed by Aya Ikeda and Mayu Kudou.

The second All Stars film starts with Tsubomi and Erika waking up (I guess they were having a sleepover) to discover that their fairies Chypre and Coffret have up and vanished on them. All that they’ve left is a note and a map for the girls to follow.
The girls end up at Fairy Land, a theme park where the fairies fly freely around whilst the general public enjoys the attractions on offer. Fairy Land is also home to the Rainbow Jewel, which you can probably guess is important in this film.
Anyway, Tsubomi and Erika soon end up meeting Love, Miki, Inori and Setsuna – the Cures from Fresh.
At this point, I should mention the formula generally starts with the current Cures meeting their immediate predecessors – Love met Nozomi in the first film, and that trend continues for each one.

Our big bad this time is called Bottom.

I think the less time spent dwelling on the name of the big bad, the better. Naturally, he covets the Rainbow Jewel, and he has several minions. Those minions happen to be some of the enemy generals from the first six seasons, as opposed to the monsters of the week as seen in the first film.

As you can imagine, the different groups of Cures end up fighting those enemies, though Cure Blossom and Cure Marine pretty much just spend most of their time running from their enemies.
Now, being fully aware of the growth Tsubomi and Erika experienced in HeartCatch PreCure!, coming back to this film is a little jarring because of that. However, it’s also worth bearing in mind that this film aired right at the beginning of HeartCatch, so Tsubomi hadn’t exactly received her full character development at that point. 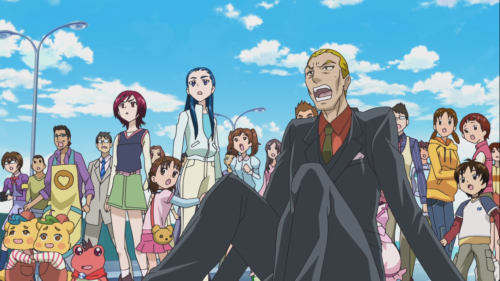 Some familiar faces here. Their only role is to wave their Miracle Lights…

Talking of background characters, a certain couple of characters from Splash Star are also relegated to that status, despite playing a major role in that season… that bugs me to no end, but I don’t think that’s ever going to change. A shame, if you ask me.

Anyway, the combat is as strong as ever, though we only get instrumental versions of the Fresh and Yes! PreCure 5 GoGo! theme tunes when they do their things.
Still, the music is pretty good. It matches the fight scenes well, and of course the Cures retain their transformation themes from their respective series. In fact, I feel that the fights against the enemy generals are actually a lot more fun than the final confrontation, purely because the Cures are going up against human-sized(ish) foes with good old physical combat – oh, and their special moves.

From a series that started with only 2 Cures, this film features 17 – and that number will only increase in the future

I can understand the need for an imposing foe like Bottom to be the final enemy for 17 Cures (well, 15 Cures and 2 supporting allies), but honestly, Bottom doesn’t really get to do much. Sure, there’s a brief beam-o-war, but I’m pretty sure you can guess how things go for Bottom in the end.
Oh, and I find it pretty funny that the move-exclusive power-up the Cures receive is almost pointless for the Splash Star Cures – they naturally possess the power of flight. I suppose it probably gives the Cures an increase in power as well.

Much like the previous film, the fairies get some dedicated screentime as well. Whilst the Cures are fighting their enemies, the fairies are trying to retrieve Miracle Lights from a haunted house. Whilst I would have preferred to see more action scenes, I suppose it does play an important part in the plot…

As already mentioned, the ending theme is a medley of opening themes – this is where we get to hear the Max Heart and Splash Star tunes. It’s s shame that’s the only time we got to hear them, though… oh, and the ending features CG Cures dancing together – something that’s standard for PreCure now.

Still, this is another enjoyable entry in the All Stars continuity of PreCure, though I feel that the first one is a bit better overall. I suspect it comes down to the use of the music – I happen to think that the opening themes for Max Heart and Splash Star are amongst the best, so it’s a shame we don’t get to hear them during the action.
This doesn’t really do anything to change the formula of the first one, though there is a change coming up. Before we get to that, however, there’s one more feature length film with ‘DX’ in its title, as well as another short.

1 Response to Thoughts on Pretty Cure All Stars DX2: Light of Hope☆Protect the Rainbow Jewel!