Time to take a look at the second, and final, volume of Homura’s Revenge!. This volume contains four chapters, from chapter six to chapter nine, which is also the final chapter of this particular tale. As ever, there’ll probably be spoilers, since this is Madoka… with that said, let’s dive in. 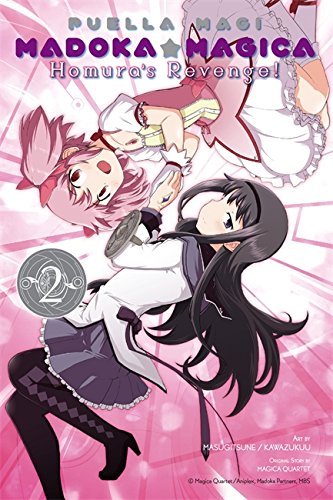 The back of the volume features an image of Sayaka, Kyouko and Kyubey sitting on Homura’s shield, as well as the blurb which goes something like this:

Homura vs. Sayaka and Kyouko?!
Even with Madoka’s help, Homura has failed to rescue Mami from her fate – worse, she may actually have brought it about. With both Sayaka and Kyouko looking to exact their revenge for Mami’s death, Homura has to concern herself with her own survival – on top of trying to save her friends! Can anything derail the tragic fate that awaits them all?

Chapter 6 opens with the confrontation between Homura and Sayaka and Kyouko, with the former confident that she can defeat the latter two. There’s a quick flashback to Kyubey introducing Kyouko to Sayaka and then it shifts back to present day with the battle between the magical girls. Homura ends up fighting both Sayaka and Kyouko at the same time, but her powers prove useful in making an escape.
Of course, Kyubey helpfully informs Kyouko that Homura has time-stopping powers, leading to Kyouko begrudgingly agreeing to team up with Sayaka. Kyubey also informs the pair of Walpurgis Nacht.
Elsewhere, Madoka correctly guesses that Kyubey was responsible for the alliance between Sayaka and Kyouko. Still, Homura is OK with how things have turned out as it means Kyouko will be able to keep Sayaka safe and the pair might survive to take on Walpurgis Nacht.
Sayaka and Kyouko hunt witches together, with the former actually not suffering the same way she did in the anime. Kyouko also has a few pointers for Sayaka when it comes to fighting. Still, Sayaka insists on the reckless approach.
Homura appears to offer the same advice. However, Kyouko traps her and together with Sayaka plans to finish her off. Oh, but Sayaka happens to be using too much magic…

Chapter 7 opens with a flashback of Kyouko agreeing to train Sayaka, before returning to present day. Kyouko and Sayaka are able to gain the upper hand against Homura, at least until she uses her powers to escape from a sticky situation. However, things don’t work out in Homura’s favour as Sayaka abuses her regeneration magic.
Of course, using so much magic comes with a price and thus another magical girl meets her fate before Homura’s eyes. She did try to help, but Kyouko misinterpreted Homura’s actions and stopped her. What follows is Homura having to explain what happened to Kyouko – one wonders how many times she’s had to do that.
Homura is the one to finish off the witch this time around – no suicide attack from Kyouko.
Kyubey explains to Kyouko about Homura’s situation, and Kyouko insists that Homura should have just explained things from the start. Of course, Homura had tried that before, but well, nobody believed her.
Kyouko feels no obligation to stick around after that, so she leaves. This means Homura is the only magical girl left to face Walpurgis Night, unless a certain someone makes a wish – all according to Kyubey’s plan.

Chapter 8 heralds the arrival of Walpurgis Nacht, though there’s the part where Madoka visits Homura’s home before that. Homura feels that she hasn’t achieved anything and has only driven Madoka into despair. However, Madoka says that she was able to save Kyouko.
Still, Homura hasn’t prepared to battle Walpurgis Nacht, so she suggests that they re-do the timeline once again.
Turns out Kyouko hadn’t left Mitakihara, and has a stock of grief seeds available. She decides to take on Walpurgis Nacht.
Meanwhile, Homura and Madoka talk about what would happen to those who remain behind if they re-do the timeline. Madoka suggests that she should become a magical girl, but we all know what Homura thinks of that.
Kyubey then turns up, and informs them that Kyouko is fighting Walpurgis Nacht alone. Madoka runs off, and Kyubey says that Homura should just go back in time by herself.
We get to see how the battle between Kyouko and Walpurgis Nacht unfolds, with Homura stepping in when Kyouko finds herself in a pinch. Madoka is there as well. Homura swears to protect Madoka, regardless of cost. Homura and Kyouko team up, an idea which was suggested in the anime but never actually happened.

In the final chapter, Homura and Kyouko hit Walpurgis Nacht with everything they’ve got, and Homura uses a technique she had witnessed Kyouko use in a previous timeline – you know, the sacrificial one? However, Kyouko stops her from doing something so reckless. Both Homura and Kyouko exhaust themselves fighting Walpurgis Nacht and Homura suffers a fatal attack.
Madoka sees this, and she does the one thing that Homura had been trying to prevent. She makes a contract with Kyubey, using her wish to allow Homura to live.
Homura isn’t too happy that she failed, however, Madoka has no regrets about using her wish for Homura’s sake. Together, Homura and Madoka deal the final blow to Walpurgis Nacht.
Homura uses all of her power so Madoka wouldn’t, completely clouding her soul gem. She asks Kyouko to finish her off before she turns into a witch. Since this is Puella Magi Madoka Magica a tragic fate- wait, no, turns out Kyouko has a spare grief seed, so we actually get something of a happy ending.
Well, almost, anyway. Homura couldn’t prevent Madoka from becoming a magical girl, so she’ll be re-doing the timeline again – and Madoka decides to say in that particular timeline so that Homura has a chance of actually achieving her wish. Of course, Homura swears to keep repeating the timeline as many times as it takes.

So there we have it – a bittersweet ending, I would say. This spin-off of Puella Magi Madoka Magica presents an interesting take and could easily slot in amongst the various timelines that Homura experienced. We also get to see some fights that would otherwise never happen (well, Mami vs. Homura happened in Rebellion, but still…)
If you’re a fan of Puella Magi Madoka Magica, I feel that this ‘what if?’ story is definitely worth taking a look at. Not my favourite spin-off (Puella Magi Kazumi Magica: The Innocent Malice has that honour), but enjoyable nonetheless.

Next time, I might actually take a look at something that wasn’t originally serialised in Manga Time Kirara… though I do still have a few Madoka spin-offs to take a look at.

I enjoy writing, manga, anime and video games, so naturally here on my blog, you will find anime reviews, Nintendo news and other such things that I deem interesting.
View all posts by Rory →
This entry was posted in Manga and tagged Kawazukuu, magical girl, Manga, Masugitsune, Puella Magi Madoka Magica, Puella Magi Madoka Magica: Homura's Revenge!. Bookmark the permalink.