So after taking a look at Puella Magi Kazumi Magica: The Innocent Malice, I figure it’s time to switch gears and take a look at something lighter and softer. As you can see from the title, I’ll be taking a look at Kakifly’s K-On! manga.
As this is a four-panel comic strip, there are no chapters to speak of. Instead I’ll be providing a general summary of how the volume unfolds. With that said, let’s take a look at some musical shenanigans. 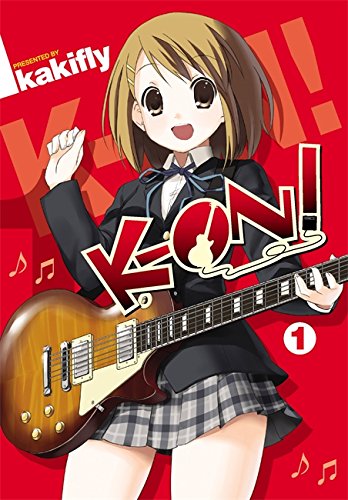 With that established, let’s take a look at what is says on the back of the first volume:
When their high school’s pop music club is about to be disbanded due to lack of interest, four girls step up to fill the membership quota. Unfortunately, lead guitarist Yui Hirasawa has never played an instrument in her life. Ever. And although she likes the idea of being in a band, standing in front of the mirror posing with her guitar is a lot easier than actually playing it. It’s gonna be a while before this motley crew is rocking out, but with their spunk and determination cranked to 11, anything is possible!

As you may notice, the translation that the manga uses for the club the girls join is the ‘pop music’ club, rather than ‘light music.’ I prefer the latter myself, as it is closer to the original Japanese – translation notes are provided at the end of the volume.

The manga starts with colour pages, showing Mio, Ritsu and Mugi joining the club. We’re back to traditional black and white afterwards, where Yui visits the light- ahem, sorry, pop music club and decides to join. There are other colour pages scattered throughout the volume – for the most part, they tend to be at the beginning of a new section.
Following on from Yui joining the pop music club, we get to see her and the other members of the pop music club go shopping for a guitar, and we learn a little about Tsumugi.
Colour pages return, with a beach scene naturally. This turns out to be a club trip, but the girls would much prefer to play around – which means sand, sea and swimsuits.
After the club trip, the girls are back to school and lazing around eating snacks rather than playing as a band. We also get to meet Sawako Yamanaka proper – she appeared at the beginning, but her we get to see that she is particularly skilled with the guitar.
With Sawako on board, the girls get ready for their first gig. Mio is extremely nervous about it, and the fact that Sawako has them wearing costumes doesn’t help. Still, the performance goes ahead.
After a successful gig, Mio trips – and rather than the anime’s rice bowl, the reader actually gets the same view as the audience – it’s only a single panel, but it’s there.
Christmas and the new year follow on from that – pretty standard school club goes on there. The volume ends with the pop music club putting on a gig for freshman orientation – Yui’s sister Ui happens to be one of those attending.

There are a few bonus comics at the end of the volume – one concerning photos that Ritsu took of Mio whilst she was sleeping, and another all about Tsumugi’s eyebrows.
We also get translation notes, which explain the some of the terms that the English translation uses, as well a few pieces of Japanese culture.
Additionally, there’s some music theory for you aspiring musicians. It’s only basic, but it teaches how to read a Musical Staff and a few guitar chords – in fact, it teaches the four guitar chords that are used in many, many songs.
As an aside, here’s a selection of songs played using the same four chords:

It doesn’t really have much connection to K-On!, but it does serve to demonstrate a point.

Anyway, getting back on track. The humour in the manga is great, which is good considering it is a comedy. Of course, there are things that are better shown in anime form, but I’ll talk about that later.
I feel that the translation for the club should have been kept as the light music club, but at least its consistent…
Something else worth noting – when it comes to buying a guitar, the manga keeps the currency as yen, unlike the English dub of the anime. The dub converts the money into dollars, despite the yen symbol being prominent – that always bugged me. This is one small thing where the manga’s translation is better than the anime’s.

A fairly enjoyable volume, and definitely will elicit a laugh or two out of those who possess a sense of humour. Honestly, I have a feeling the following volumes will be the same… well, I’ll still be posting about them regardless.

I enjoy writing, manga, anime and video games, so naturally here on my blog, you will find anime reviews, Nintendo news and other such things that I deem interesting.
View all posts by Rory →
This entry was posted in Manga and tagged Comedy, K-On!, Kakifly, slice-of-life. Bookmark the permalink.

1 Response to Thoughts on K-On! Volume 1