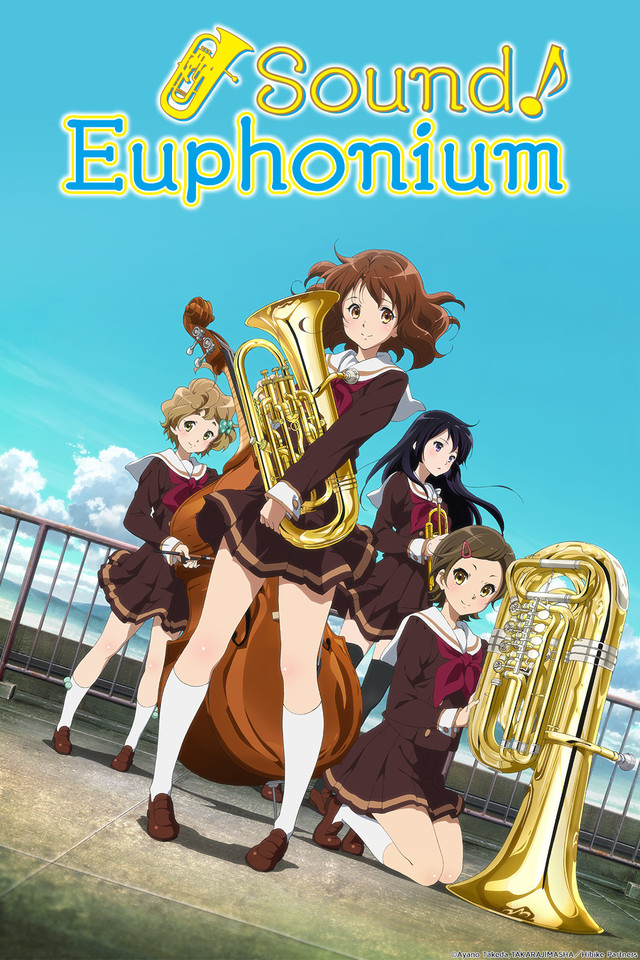 Sound! Euphonium is a thirteen episode animated adaptation of a Japanese novel written by Ayano Takeda.
The anime was produced by Kyoto Animation and directed by Tatsuya Ishihara.

Sound! Euphonium focuses on the Kitauji High School concert band club as they strive to make it to a national tournament. The protagonist is Kumiko Oumae – she plays the euphonium.

The anime shows the steady progress of the concert band club as they build towards becoming good enough to perform at the nationals. There are numerous trials and tribulations that the members of the club have to overcome.
The first and foremost is the appointment of a new advisor – Noboru Taki. He is strict and earns a lot of ire from the club members due to this methods. Still, he is the type of teacher who employs strict methods in order to help his students to improve.
Tensions break out amongst the students when it comes to selecting solo parts, other students have to deal with coming to terms with feelings for their classmates and not everyone can perform in the nationals – there is a fair amount of drama to be found in this anime.
The way the characters deal with these dramas makes for some interesting viewing, and things are generally resolved in a satisfying manner.

Throughout the series, the interactions between Kumiko and the trumpet player Reina Kousaka are less than subtle about hinting at a relationship between the two girls. The two girls share tender moments with each other and indulge in some playful teasing after Kumiko gets over her awkwardness around Reina. It’s clear that this pairing has a following, as there has been plenty of fanart of the pair springing up.
Apparently it’s not quite that way in the novel itself, but we’re focusing on the anime adaptation here.

Of course, not all the screentime is given to Kumiko and Reina. Other members of the concert band club include Kumiko’s friends Hazuki and Midori. There’s students from across all the years in the club, and some are more enthusiastic about participating than others.
One of the stand-out characters is another euphonium player – Asuka Tanaka. She is the vice president of the club, but the president relies upon her for support. Asuka can be quite playful, though she is serious about performing in the nationals.
Not all the characters are particularly great though – particularly when rumours about Noboru Taki playing favourites when it comes to selecting the soloist for the piece they are performing at the nationals.

As for the music itself – well, that’s the whole focus of the show. Sure the soundtrack is not as varied as Show By Rock!!, but that probably comes from the fact that the concert band club are working to perfect their performance for the nationals.
Still, it’s quite fun to listen to and there’s a couple of other instances of classical music that crop up during the run as well.

Sound! Euphonium proves to be quite an interesting watch, particularly if you are into music. The drama is done quite well, too.

Score: 8/10
An anime that’s about being in a concert club band – it does what it sets out to do, with some additional drama and ship teasing thrown in for good measure.

I enjoy writing, manga, anime and video games, so naturally here on my blog, you will find anime reviews, Nintendo news and other such things that I deem interesting.
View all posts by Rory →
This entry was posted in Rory's Reviews and tagged drama, Hibike! Euphonium, Music, Rory's Reviews, slice-of-life, Sound! Euphonium. Bookmark the permalink.