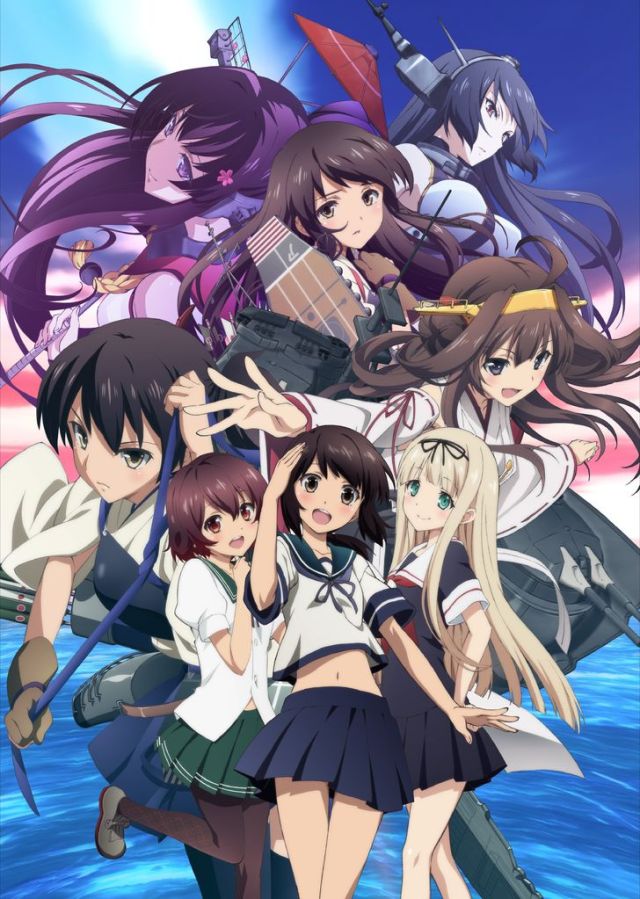 Kantai Collection (also known as KanColle) is a twelve-episode action anime series based on the free-to-play web browser game of the same name that was developed by Kadokawa Games. The anime itself was created by Diomedéa.

In Kantai Collection, the majority of the characters are “Fleet Girls” – moe anthropomorphisms of World War II naval warships. Each character is based on real-life vessels, with their personalities and appearances correlating to said vessels.
In the anime, Fubuki serves as the protagonist. At the beginning, she arrives at the naval base and meets the other Fleet Girls. It isn’t long before she is sortied into battle, despite her lack of experience.
The plot of Kantai Collection mixes the daily lives of the Fleet Girls at the naval base with their battles against the Abyssal Fleet at sea. Of course, there’s also plenty of training going on with some power-ups thrown in too, in the form of upgrades.

Kantai Collection has loads of characters. A few of them received decent development, but many others are just there. When you only have twelve episodes and more than forty characters, it’s inevitable that only a select few can receive any major development.
Fans of Kantai Collection who decided to watch the anime in hopes of seeing their favourite Fleet Girl may find themselves disappointed, but they might find themselves with a new favourite after watching the characters who do receive development. Naturally, this is less of an issue for those who jumped headfirst into the anime without prior knowledge of who everyone is.
The admiral in this show is only ever shown through shadow or a first-person view, as the players of the browser game serve that role themselves. The admiral’s gender is ambiguous, despite what some subtitles would have you believe.

A key component of Kantai Collection are the battles at sea. They mix traditional animation with CGI, the latter of which might be an issue for purists. However, it doesn’t prevent them from being enjoyable and arguably the highlight of the anime.

Score: 8/10
Kantai Collection is a fun anime to watch, whether you are a fan of the original game or not. A huge number of characters means less development for some, and some people might not enjoy the CGI during battle scenes, but overall this is a good experience.

I enjoy writing, manga, anime and video games, so naturally here on my blog, you will find anime reviews, Nintendo news and other such things that I deem interesting.
View all posts by Rory →
This entry was posted in Rory's Reviews and tagged Action, Comedy, KanColle, Kantai Collection, Military, Rory's Reviews, Sci-Fi. Bookmark the permalink.