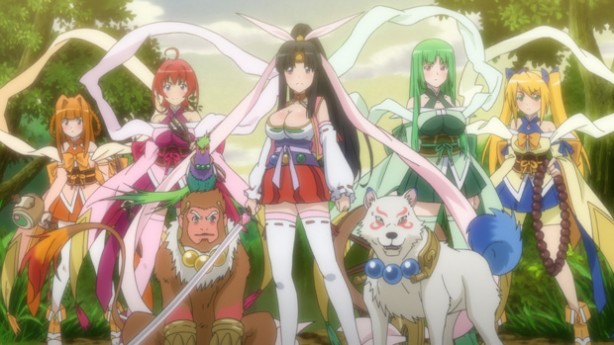 Momo Kyun Sword is a twelve-episode fantasy anime based on a light novel that is serialized online for free. The anime television series was adapted by Tri-Slash and Project No.9.

The plot of Momo Kyun Sword focuses on Momoko, a girl born from a peach. If the being born from a peach thing sounds familiar, that would be because she is based on Momotaro from the traditional Japanese folktale. She is accompanied by three animal gods: Inugami, Sarugami and Kijigami – dog, monkey and pheasant respectively. Momoko is assigned the task of collecting Michimi Peach Fragments on behalf of Heaven, in order to prevent the Oni acquiring that power.
Aside from Heaven and the Oni, there are also humans who desire the power of the Michimi Peach.

However, Momo Kyun Sword doesn’t do much with this plot. For the majority of the run, the show focuses entirely on fanservice. It includes a beach episode (with a giant squid, naturally), a hot springs episode and many other forms of fanservice. Having to endure all that is not worth it, even if the last four episodes do dramatically improve.
It is during those last four episodes that something resembling an actual plot begins to surface. An item is discovered that renders the first eight episodes’ search for the Michimi Peach Fragment ultimately pointless. Fortunately, Momo Kyun Sword becomes a bit more enjoyable when it is focusing on drama rather than titillation.

One thing that Momo Kyun Sword does have going for it throughout its entire run is the soundtrack. The music manages to fit the mood, particularly when Momoko has to fight.
Talking of Momoko fighting, she uses a technique called Possession Fusion, which lets her fuse with one of her animal god companions. These play out like magical girl transformations. Also, they also seem to end with Momoko unwillingly returning to her original form with clothing damage…

Serving as rival for Momoko is Onihime. She is the daughter of the king of the Oni, Jakiou. Her regular outfit is extremely revealing, but that comes as no surprise considering this anime. She gets some interesting development when the anime decides to start taking things seriously, especially considering her reaction to her actual origin.

Momo Kyun Sword has a couple of interesting ideas, but it doesn’t really go anywhere with them. It shows that it is able to handle drama, but having to endure eight episodes of pure fanservice to get there just isn’t worth it.

Score: 5/10
Having to endure all the fanservice just to get to the actual good quarter of the series just isn’t worth it. You won’t be missing much if you don’t watch this one.

I enjoy writing, manga, anime and video games, so naturally here on my blog, you will find anime reviews, Nintendo news and other such things that I deem interesting.
View all posts by Rory →
This entry was posted in Rory's Reviews and tagged Action, Fantasy, Inugami, Kijigami, Momo Kyun Sword, Momoko, Onihime, Rory's Reviews, Sarugami. Bookmark the permalink.