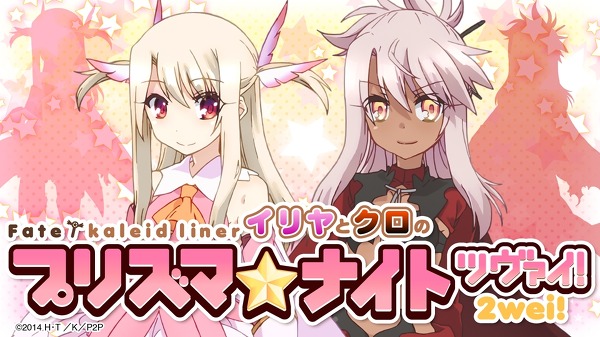 The plot of Fate/kaleid liner Prisma☆Illya 2wei! focuses on the arrival of Illya’s doppelganger, Kuro, for the most part. This results in a more slice-of-life oriented anime compared to the first season, which focused on the collection of Class Cards.
As a result there is a lot more screentime for Illya’s friends and family. Your enjoyment of this will depend on what you think of the characters, and some are certainly worth more than others.
Most of the anime shows how Kuro’s arrival affects Illya’s life, which is quite a lot considering the things Kuro gets up to.
One of those things will certainly appeal to yuri fans, as long as they don’t mind watching young characters kissing.

The greater focus on slice-of-life is arguably the greatest weakness of Fate/kaleid liner Prisma Illya 2wei!. It is by no means bad, but it just feels lacking compared to the almost constant action seen in the first season. Whilst a change of pace can be good, the Fate series fight scenes are definitely amongst the best. There is an argument to be made that the slice-of-life helps to develop characters, particularly in the case of newcomer Kuro.

It’s in the final three episodes that the action really picks up. There is a noteworthy fight before that, but the arrival of a certain character kicks the action into high gear.
That particular character served as Rin and Luvia’s predecessor in collecting Class Cards, and she is certainly capable. Her arrival was hinted at in the stinger of the first season, and it is great to see what she is actually capable of.

Score: 7/10
It may not quite be as good as the first season, but Fate/kaleid liner Prisma☆Illya 2wei! is well worth a watch.

A third season is due to air in 2015, entitled Fate/kaleid liner Prisma☆Illya 2wei Herz!.

I enjoy writing, manga, anime and video games, so naturally here on my blog, you will find anime reviews, Nintendo news and other such things that I deem interesting.
View all posts by Rory →
This entry was posted in Rory's Reviews and tagged Fate/kaleid liner Prisma☆Illya 2wei!, Illyasviel von Einzbern, Kuro, Miyu Edelfelt, Rory's Reviews. Bookmark the permalink.