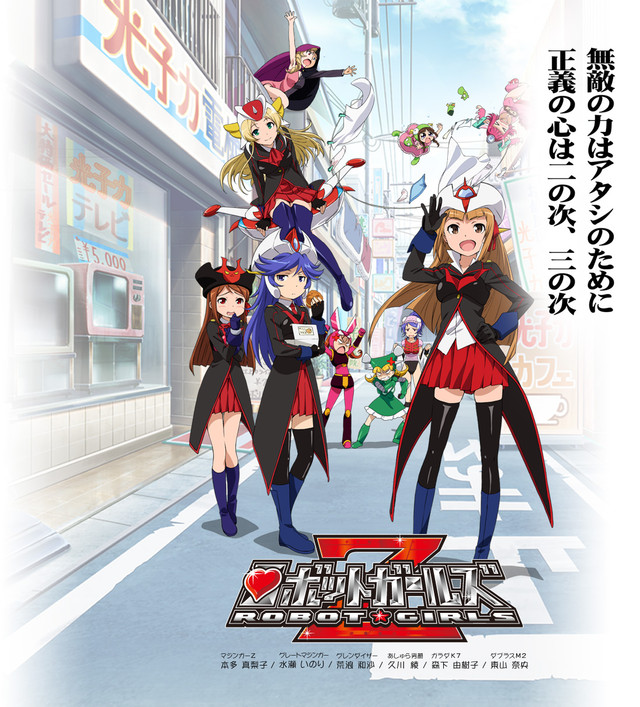 Robot Girls Z is an anime series produced by Toei Animation. It has three episodes, each one consisting of three parts. It parodies various mecha series by Toei, anthropomorphising robots from those series into magical girls.

The main characters of Robot Girls Z are the three members of Team Z: Z-chan, Gre-chan & Grenda-san. They are based on the Mazinger Z, Great Mazinger and Grendizer robots respectively.
Z-chan is the leader of Team Z. She is hotblooded and impulsive. She likes to fight evil, though she has little interest in justice.
Gre-chan is the youngest member of Team Z. She is quiet compared to her allies, though she is cynical. She is rarely seen without some form of gadget in her hands.
Grenda-san is considered more sophisticated than her other allies, and is generally friendly. She does have a sadistic side and will punish those who upset her in embarrassing ways.

The three main antagonists that Team Z have to face are three members of the Subterranean Empire. They are Baron Ashura, Doublas M2 and Garada MK7.
Baron Ashura acts as an older sister to the other two, even ignoring her superiors to care for them. She has an odd appearance; one side is male, the other female.
Doublas M2 always carries a pair of handpuppets and speaks through them. If they are taken from her, she becomes insecure.
Garada K7 is a tomboy who loves to fight, though she is weak spirited.

There are many other characters based on Toei’s mechas, most of them generally introduced as antagonists for Team Z to overcome.
Generally in each episode, the new antagonists will be introduced, and they will get into a conflict with Team Z. After some slapstick comedy, fanservice and over-the-top action Team Z emerge victorious. Oh, and there are plenty of references to the original Toei cartoons.

The girls of Team Z are horrendously overpowered, so one may feel more drawn towards the antagonists rather than the main characters. There isn’t really any character development for Team Z, though one could argue that isn’t so important for something that doesn’t take itself seriously.

That’s the thing; there is nothing serious about this anime. It doesn’t take itself seriously, which may appeal to some people more than others. The references to Toei’s mechas may be lost on those who aren’t aware of the originals.

Score: 6/10
A silly anime that has a silly concept. Some might be put off by the rampant fanservice, over-the-top violence and slapstick comedy, but that could also be a list of reasons for getting into Robot Girls Z.

I enjoy writing, manga, anime and video games, so naturally here on my blog, you will find anime reviews, Nintendo news and other such things that I deem interesting.
View all posts by Rory →
This entry was posted in Rory's Reviews and tagged Comedy, magical girl, Mecha, Parody, Robot Girls Z, Rory's Reviews, Toei Animation. Bookmark the permalink.